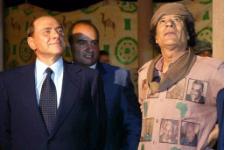 from Gennaro Carotenuto's blog in Italian.

The police of the Libyan dictatorship of Muammar Gheddafi massacred ten persons yesterday in Benghazi. Yes, for sure, that Calderoli is a piece of shit, but is it ever possible that no one criticises Gheddafi and his police anymore?

We are living in a horrifying moment for the media, for information and freedom of the press. Every news item is treated as if it were boxes hidden within boxes from which the truly important things seem to be hidden, just like the news of the annulment of the Egyptian elections has been completely silenced. Among yesterday’s news items: “Calderoli is a piece of shit like all the Northern League”, “protests against that piece of shit Calderoli in Benghazi” and “Gheddafi’s police massacre ten protesters”. In your opinion, which one of those is most serious news item? The most serious one is the third one, but it is totally unheard in comparison with the first. At any rate, who didn’t know that Calderoli was a piece of shit? But the re-dimensioning, the minimisation, the disappearance, the dilution of the third news item is part of a precise communicative strategy.

Up until a few years ago, Gheddafi was part of the “Axis of Evil”, there were denouncements regarding political prisoners, torture, freedom of the press, the death penalty. Since the days of Ronald Reagan and Bettino Craxi, the West seemed to always be on the verge of launching a war against Tripoli. Then one day of October 2004 Silvio Berlusconi went to Tripoli and he defined Gheddafi as “a great friend of mine and of Italy. Gheddafi is the leader of liberty.” Direct quote.

Obviously, the concentration camps of Gheddafi are transformed into concentration camps of liberty. Gheddafi does not avoid sentencing to death or torturing an opposer, but the West systematically looks the other way. Now Gheddafi’s police massacre ten opposers in the square of Benghazi and we are busy taking it out on that piece of shit Calderoli?

Berlusconi did well to demand the resignation of the piece of shit from the Padanian plains. Berlusconi wanted his head (head? sic!) in name of good relations with Muslims. But at the same time, he closed both eyes towards the massacres of Muslims who were in all likelihood provoked by that Padanian pig, but perpetrated by the police of the “man of liberty Gheddafi, great friend of mine and of Italy.”

The Italian government did not protest Gheddafi for those ten deaths. Gheddafi, just like Mubarak, is secular and an enemy of fundamentalists. Until a few years ago we would have almost bombarded Tripoli for a massacre of this entity. And Gheddafi would have been put at the top of the list of the world’s Bad Guys. It’s more convenient to take it out on our Padanian filth.

Translated from Italian by Mary Rizzo, member of Tlaxcala, the translators’ network for linguistic diversity (tlaxcala@tlaxcala.es) . This translation is on Copyleft.
thanks Miguel for the tip.