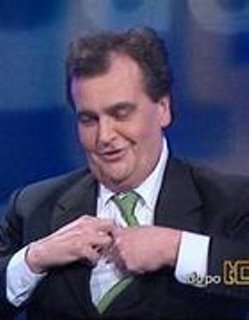 from the editors of Quibla
18 February 2006
Translated from Italian by Mary Rizzo, member of Tlaxcala, the network of translators for linguistic diversity (tlaxcala@tlaxcala.es). This translation is on Copyleft.

[Translator's note: It is important to bear in mind the role that Italy plays in the collective consciousness of the Libyan people. In the period of European colonialism, all of Libya was an Italian colony. Only in 1951 did it obtain full independence. Italy had managed to become the first European nation to attempt to establish full diplomatic and commercial relations with Libya, setting it apart from the nations under the American umbrella. Libyans, in this way, look to Italy with a sentiment of both love and loathing, and are extremely sensitive to how Italy behaves regarding Libyan, North African and Islamic issues. There are dealings underway to allow Italians who were expelled from Libya to return.

The interview with Calderoli did not happen in a vacuum. It occurred during the prime time after news interview show "Dopo il TG", also seen in Libya, conducted by the news director of the national network's major news desk, RAI TG 1, Clemente J Mimun. Mimun is a prominent and vocal supporter of one of the States he is a citizen of, Israel. He has been in the news profession for many years, and it seems peculiar that such an event could take place in a totally improvised way and without a "safety net", knowing that the newspaper that the Northern League refers to, "La Padania", had published these cartoons, and the extemporaneous nature of the guest speaker. MR]

Roberto Calderoli is a professional provocateur. In the band of mafiosi that constitutes the government of Silvio Berlusconi, the bandit who fancies himself Napoleon, the Minister of Institutional Reforms distinguishes himself particularly for his gesticulations and his comments often in bad taste.

Some examples, from the archives of Quibla:

In January of 2003, when he was the Vice President of the Senate, he suggested to all the Italian women “over five years of age" to “put in their handbags a nice pair of scissors and to use them to the limit" in order to defend themselves from the “bestial aggression from immigrants."

And he continued: “We are faced with abominable episodes, with a new emergency of Mad Cow: little girls and teenagers are attacked, stripped not only of their clothing but also of their dignity, which is the work of beasts. We have to react to all of this."

In August of 2004 he declared that “it is necessary to use force to push the illegal aliens back," who have come from the sea and are disembarking on the island of Lampedusa, when they don’t drown first. “We aren’t the Red Cross. Islamic terrorism uses this open door to illegal immigration to enter into the country. Our population has the right to legitimate defence."

In November of 2005, Calderoli was, together with the Minister of Communications Mario Landolfi, the only representative of the government to participate in a protest march “Long Live Israel, Long Live Liberty!" organised by Giuliano Ferrara before the Iranian embassy in Rome.

But this week the man who succeeded Umberto Bossi - now reduced to little more than a vegetable - at the head of the Northern League, a racist and demagogic political party, has crossed the border: in a televised interview he unbuttoned his shirt to show the T-shirt he was wearing, upon which was printed one of the Danish cartoons depicting the Prophet. A few hours later, after the Friday prayers, a thousand Libyans reunited outside the Italian Consulate at Benghazi to protest against the umpteenth provocation from the north. The official number is 11 dead and 25 wounded. The 60 policemen present on the scene found themselves “in difficulty."

Immediately after the start of the “incidents" the Italian Minister of Internal Affairs Pisanu telephoned Muammar Gheddafi to distance himself from the act of Calderoli, to which the Colonel replied that at the very least they expected the dismissal of the provocateur. Pisanu insisted upon the will of his government to maintain “dialogue between Islam and the West."

At Nassiriya in Iraq and at Herat in Afghanistan, two cities that are occupied by Italian soldiers, the Friday sermons had severely condemned the provocations of Calderoli, but no protest demonstrations had followed. The entire political class has thrown itself on this unexpected fortune - Italy is in the midst of its electoral campaign for the new parliament and government - and had loudly called for the dismissal of the provocateur, even his boss, Silvio Berlusconi, had joined the chorus of those who are asking for the head of Calderoli. He stated that he had spoken with Umberto Bossi, who had distanced himself from his successor. Is the career of Roberto Calderoli therefore finished? He could always try to recycle himself as a head clown for the Royal family of Denmark. And he could even show a bit of prudence: on an Islamist forum on Internet, an armed group had written: “Let's tell this crusader to be patient, because the Islamic Army will conquer Rome. The declarations of the Italian minister will not be blown away in the wind." To those who catch the drift...
from http://quibla.net/edito2006/tribune2006-1b.htm