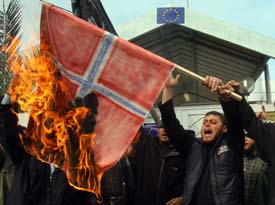 This is not an attempt to defend Denmark or its apparently selective 'freedom of the press', but to highlight the misconstrued priorities inundating the Arab world today.

Only an irresponsible and intellectually inept individual would sketch such insulting images as those depicting Prophet Mohamed by a cartoonist in the Danish Jyllands-Posten newspaper. And no self-respecting newspaper would allow itself to run such filth. However, the backlash in the Muslim world highlights a much more serious issue.

Jyllands-Posten -- among other newspapers that re-ran the offensive cartoons -- is obviously neither self-respecting nor serious. What good will it do to depict a prophet revered by hundreds of millions all around the globe as a terrorist, carrying a bomb under his turban? Nothing at all. What it will do though, is intensify and cement the feelings of bitterness and humiliation experienced by millions of Muslims as they endure the wrath of US-led Western wars, with all of their tragedies and endless bloodshed.

Not even the handy excuse of freedom of the press is so reasonable a defense to the mockery. Such freedom should not be the kind of versatile pretext unleashed only to widen the divide between the West and the Muslim world. Moreover, why not admit that in most Western societies, there are many unquestionable values, ancient and recent, that are taboo, which few dare to approach, the Holocaust being one of them.

The anti-Danish movement managed to build up across Muslim countries at such an impressive speed: grassroots collective action and decisive political moves led by various governments - with Libya and Saudi Arabia on the helm - quickly turned into determined diplomatic efforts. Arab League missions in Denmark and across Europe united in one of the most coordinated campaigns organized by Arabs since the 1973 War, heaping even more pressure on both Denmark and Norway. Meanwhile, a serious economic boycott campaign is rapidly translating into empty shelves in grocery stores that once offered Danish products across Saudi Arabia and other countries.

The Danish prime minister, Anders Fogh Rasmussen, although he didn't apologize personally, commended Jyllands-Posten for offering a clear apology for offending Muslims and Muslim nations for its editorial decision to publish the cartoons. But that would not suffice in the face of the gathering storm, as Arab League representatives are surely taking the matter to the United Nations, with the hope of passing a UN resolution, backed by sanctions that would protect religion from insults, according to the BBC.

While one must commend such a unified Arab and Muslim stance -- hoping that it would remain confined to legitimate forms of protest -- one cannot help but wonder where was such collectiveness when it was needed the most?

This is not to suggest that transgression on a people's beliefs -- any people and any belief -- should be taken lightly. However, if Arabs can be so efficient in organizing such popular (and effective) campaigns that utilize economic, political and diplomatic leverage to extract concessions, then why the utter failure to carry out such campaigns protesting against the US war on Iraq, its unconditional support of Israel and its condescending foreign policy and grand democracy charades it wishes to impose on everyone?

Isn't it rather strange that cheap Israeli products are penetrating Arab markets from Morocco to Qatar in the most blatant of ways, despite the fact that Israel occupies land belonging to three Arab nations?

Isn't it peculiar that Muslim countries are shrewdly paving their way towards normalization with Israel -- some overtly like Pakistan, others sneakily like Malaysia -- despite the fact that Israel unabashedly moves forward with its policy of targeted assassination, killing hundreds of Palestinians?

And how belligerent could the Danish media be if compared to its counterparts in the United States and Britain? Nonetheless, is there one Arab household that lacks access to CNN, HBO and Fox?

It's rather ironic that many in the Arabic media discovered by total chance that 530 Danish soldiers are taking part in the illegitimate US war on Iraq, by way of the Danish newspaper controversy. Thus, it cannot even be claimed that popular response to the insulting comics was the culmination of years of resentment harbored towards Danish foreign policy, whether in Iraq or towards any other Arab or Muslim related issue.

This is neither an attempt to defend Denmark (or Norway) or its apparently selective "freedom of the press", but to highlight the misconstrued priorities inundating the Arab world today. During a decade of US-led UN sanctions in Iraq, neighboring Muslim and Arab countries were commended by the US, saying that their cooperation was vital to the success of the sanctions imposed on the stricken nation. According to the most modest and outdated UN reports, over 500,000 Iraqi children died as a result of the lack of medicine. Where was the popular uproar then, the diplomatic fury and the boycott campaign?

I am afraid that the Muslim and Arab-led anti- Danish campaign will widen a chasm separating both worlds, bolstering the Arabs' reputation of being intolerant while providing an unimportant cartoonist with the opportunity of a lifetime: a chance for martyrdom on behalf of freedom of the press and perhaps a book deal, and if lucky, a spot on the Oprah Winfrey show. But that's all that one should expect.
Prophet Mohamed is revered because of his daily-felt contribution to Muslim life everywhere. He needs not a Danish cartoonist to validate or nullify his relevance in the lives of millions. Of that Muslims are to be sure. However, it is discouraging that the collective energy of the Muslim world is consumed punishing a small European country over a drawing, while US military bases infest the heart of the Arab world, and American fast food restaurants crowd every street corner, from the Atlantic Ocean to the Arabian Gulf, while few seem to notice or even care.

-Ramzy Baroud is a veteran Arab-American journalist and the editor in chief of the Palestine Chronicle. He currently teaches mass communication at Australia’s Curtin University of Technology, Malaysia Campus. He is the author of the forthcoming book Writings on the Second Palestinian Uprising: A Chronicle of a People’s Struggle (Pluto Press, London).