Sajjad Khan - Cartoons, Voltaire and the Non-Clash of Civilisations 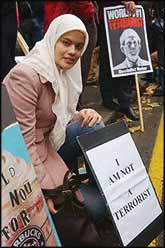 from The American Muslim

Who said politics was boring, as Mark Warner the former Governor of Virginia said recently that politics was not a battle between right and left, or between conservative and liberal but between the past and the future. In the battle of ideas around the cartoons controversy, the Muslims are advocating the future whereas the west remains wedded to the past.

Of course it’s not pitched like that, for most people the west remains the bastion of intellectual progress, vibrancy and enlightenment. For them the Muslim attitude towards the Danish cartoons has an uncanny resemblance to their own dark ages, a period characterised by oppression, material backwardness and stagnation. The philosophical differences are not confined to what they perceive as fanatical Muslim censorship. Issues such as women’s rights in Islam, the calls for the establishment of Shariah or Muslims overt religious devotion also sit uncomfortably with the secular liberal order. Most commentators in the west believe that such Islamic values belong more to the first century than the twenty first.

However the cartoons issue is the latest example to demonstrate that the west is losing its inner confidence, compromising its core beliefs and constantly alluding to a past utopian enlightenment age. For most people the idea of a ‘clash of civilisations’ is an anathema, but even if you don’t like the world ’clash’ as it may imply perpetual war, even a pre-requisite to a ‘dialogue of civilisations’ is that both civilisations stand up passionately for their core beliefs. In the cartoons controversy, we haven’t seen that, the Muslims have collectively stood up for their beliefs, yet the western response has been anaemic to say the least. Don’t get me wrong; I have profound philosophical differences with secular liberalism and absolute freedom of speech, yet even I can respect its viewpoint when coherently articulated. Freedom of speech is the cornerstone of western civilisation, of individual liberty, of free market capitalism, of material humanism and of representative democracy; it is the foundation on which the entire secular liberal ideology resides. Voltaire’s infamous aphorism of defending to death the right for people to speak is an integral part of the west’s cultural DNA. Yet throughout the cartoons issue, you would have thought freedom of expression was an optional extra traded away to ensure a return to an arid status quo.

But surely the west did defend its beliefs I hear you say, as much as the Muslims defended theirs. Of course some did, but the main pillars of western society didn’t and for very unprincipled reasons. The US and British governments who claim to be bringing western values to Iraq couldn’t even defend their civilisational cousins in Denmark, for fear of losing even more popularity in the Muslim world. Most newspapers and TV stations in the US and Britain did not reproduce the cartoons not because they were not newsworthy but because of fear of reprisals.

Even in continental Europe, there were mixed messages with the French President condemning the publication of the images, so much for the sanctity of free speech in La Republique. The abandonment of free speech wasn’t confined to governments and the fourth estate; big business the other major pillar of western society was also driving a horse and carriage through the sanctity of free speech. Nestle showed their ‘solidarity’ with their corporate colleagues in Scandinavia, by taking out advertisements in Saudi newspapers stating they weren‘t Danish.

Lastly there were no widespread demonstrations by the western public mirroring those seen by the Muslims to defend the concept of freedom of speech, so much for a clash of civilisations.

Of course the cartoons issue is just the latest example of western civilisation’s sacrifice of key principles for expediency, following Guantanamo Bay, the illegal Iraq war, draconian anti-terror legislation and Abu Ghraib. The Muslim world as opposed to its opportunistic and dictatorial leaders have shown the future, a world where principles, values and sacred beliefs are put ahead of economic interests, popular pandering and political expediency. Many may disagree with the small amount of violence accompanying the worldwide demonstrations from Jakarta to Tunis, however we cannot ignore the passion of those demonstrating. Principle, passion and sacrificing for a higher purpose are moribund concepts in the secular west. Muslims in their millions across the globe have shown the world that there are things worth fighting for, other than oil and reconstruction contracts. Voltaire must be turning in his grave.