Elimination of Racial Discrimination: the case of Israel 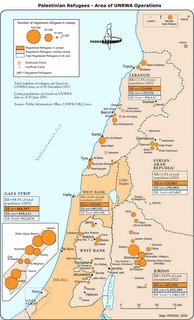 Map from Passia of the distribution of the Refugee Camps for those expelled from Israel. (click on the image to enlarge it)

A common feature of Israel for more than 50 years has been its discriminatory policies which underly intolerance and racism towards Palestinians in Israel, the occupied Palestinian territories, and in forced exile. Such statement is not "anti-semitic propaganda", as Israel's apologists commonly claim. Independent experts reviewing Israel's peformance under international human rights treaties have regularly found that these discriminatory policies create second-class citizens, a colonial regime, and ongoing forced displacement.

Today, on the International Day for the Elimination of Racial Discrimination, over 7.5 millions Palestinians are either refugees or internally displaced persons and most are stateless. Since 1948, Israeli 'laws' have been shaped not only to prevent the return of refugees but also to change the demographic composition of Israel and the occupied Palestinian territories. This demographic transfer is aided by the Israeli Law of Return, which allows any Jew in the world to 'return' to Israel and be granted citizenship. The Committee for the Elimination of Racial Discrimination concluded that the denial of the "rights of many Palestinians to return and possess their homes in Israel" is discriminatory and perpetuates violations of fundamental human rights (CERD/C/304/Add.45, March 1998).

Creating a Jewish majority is at the heart of Israel's policies and is achieved through the de-Palestinization of Palestinian land. For instance, since 2002, thousands of people have been displaced by the construction of the Wall and its associated regime. Prof. John Dugard, Special Rapporteur for the Occupied Palestinian Territories recently observed that "the closed zone is gradually being "cleansed" of Palestinians, where land will in due course be transferred to land-greedy settlers." (E/CN.4/2006/29, 17 January 2006).

Similarly, in pursuing a Jewish majority, Palestinian-Israelis residents of the Galilee and the Naqab are being forcibly displaced. Israel has emphasized the Jewish character of the state and the need to create and maintain a Jewish majority to such an extent that the Committee on Economic, Social and Cultural Rights concluded that "Jewish nationality" is ground for "exclusive preferential treatment" resulting "in discriminatory treatment against non-Jews, in particular Palestinian refugees." (E/C.12/1/Add.90, May 2003). Israel's policies are based on racial superiority, and include policies of apartheid, segregation or separation, which defy the principles of equality, non-discrimination and the right of return and self-determination of the Palestinian people.

This rationale of racial superiority leads to colonialism. It is at the centre of the "unilateral disengagement plan" promoted by Olmert's Kadima party, the expected winner in the upcoming Israeli elections, and at the core of all 'transfer' (ethnic cleansing) proposals currently dominating the election campaign of the right wing in Israel.

Unless action is taken, future Israeli policies will continue to be discriminatory. BADIL strongly believes that the continued "existence of racial barriers is repugnant to the ideals of any human society" (Preamble, CERD). On the International Day for the Elimination of Racial Discriminaton, BADIL thus reiterates the call issued by over 170 Palestinian civil society organizations and networks in July 2005:

"We, representatives of Palestinian civil society, call upon international civil society organizations and people of conscience all over the world to impose broad boycotts and implement divestment initiatives against Israel similar to those applied to South Africa in the apartheid era.

We appeal to you to pressure your respective states to impose embargoes and sanctions against Israel. We also invite conscientious Israelis to support this Call, for the sake of justice and genuine peace.

These non-violent punitive measures should be maintained until Israel meets its obligation to recognize the Palestinian people’s inalienable right to self-determination and fully complies with the precepts of international law by:

* Ending its occupation and colonization of all Arab lands and dismantling the Wall;

* Recognizing the fundamental rights of the Arab-Palestinian citizens of Israel to full equality; and

* Respecting, protecting and promoting the rights of Palestinian refugees to return to their homes and properties as stipulated in UN resolution 194."