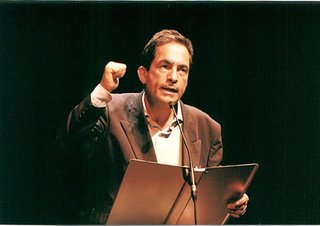 (thanks Peter A)
Gideon Levy, the voice of Palestinians in Israel
Claude Lévesque
Monday, 6 March 2006
"Israeli society is in a coma." If this were said in a casual tone and in another context, we could see in this expression a tasteless joke about the death agony of Ariel Sharon. But Gideon Levy, who recently granted an interview to Le Devoir, compels us in his direct fashion to tackle grave questions, not at all by weak, facile humor.

A journalist with the daily Ha'aretz for 24 years, Mr. Levy has gradually come to specialize in describing the Israeli occupation of the Palestinians from the viewpoint of the Palestinans. He considers today the impact of his articles on the consciences of his fellow-citizens who, according to him, shut their eyes to the reality of this occupation, trying to act as though the Palestinians do not exist.

"I write less about the Palestinians than about us, the Israelis, what we are doing over there," he explains, "when we consider our motivations. I write about what we make them suffer. I came to this very gradually. I didn't tell myself one day that I would devote myself to this mission. It is by visiting the occupied territories, time after time, that I understood two things: first, that the great drama of Israel is unfolding in its backyard and, second, that very few Israelis are aware of it."

By the way, very few Israeli journalists describe life under occupation, Mr. Levy reports, who refuses to attribute this fact to simple lack of interest or curiosity. "There has been a process of dehumanization and demonization of the Palestinians. It's not like not wanting to meet people from Vietnam or Tibet. We have the question of a profound moral responsibility borne by every Israeli."

The Ha'aretz journalist says he has received many criticisms, sometimes very severe, from his readers, but adds that he has never been subjected to pressure to change the nature of his work: "It is very important to emphasize that Israel is a democracy, at least for its Jewish citizens. A very liberal democracy, equipped with total and very real freedom of speech. The generals invite me to briefings, politicians talk to me, and I have free and total access to the occupied territories."

"People think that I am biased, including my colleagues," continues Mr. Levy. "But when all the media are biased in the other direction, when they present things in a way that approaches brain-washing, I consider it my duty to be biased."

If he enjoys access to the Palestinian territories for his reporting, his Palestinian colleagues work under very different conditions. "Most Palestinian journalists work for international media as cameramen, photographers, or reporters," he says. "They are denied freedom of movement, like all other Palestinians. They generally do not have access to Israel. Often, they can't even travel from one (Palestinian) town to the next."

On the ground
From 1978 to 1982, Gideon Levy served as spokesman for Shimon Peres, the latter being the leader of the opposition. In the course of his journalistic career, Mr. Levy has known other politicians, Israelis and Palestinians, among them Yasser Arafat, "a very charming, very warm and considerate man," but who held always to slogans. Like all politicians, he thinks.

Mr. Gideon prefers to meet ordinary families during his travels in occupied territory. His presence is not unnoticed. "Palestinians are always surprised to see an Israeli arrive who is not armed and who is ready to listen. And to speak as though to humans. Often the children begin to shout: Yahoud!, Yahoud! (A Jew! A Jew!)."

Gideon Levy generally signs a story on the ground and an editorial each week in Ha'aretz. According to him, if his writings influence the Israeli readership, it is more by their cumulative effect than by one or a few particular articles. "My stories repeat themselves: another house demolition, another pregnant woman who lost her baby due to a checkpoint," he explains.

"These recent years, it's difficult to have the least impact because Israeli society is in a coma," he laments nonetheless. And why so? "It arises from two factors, I think. First, Ehud Barak succeeded in spreading the required lie that there was no Palestinian partner (for peace). Secondly, the terrorism, the explosions in buses. The combination of these two factors has made the Israelis totally indifferent to the sufferings of the other. This coma is terrible; it's not a very healthy situation."

Gideon Levy is not surprised by the victory of Hamas in the recent Palestinian elections. He advises the Israeli leaders not to press it against the ropes. "Hamas in power will be different from Hamas in opposition. History teaches us that extremists who have come to power have become moderates. Israelis were very frightened when Menachem Begin came to power (in 1977). And yet he became the first Israeli to sign a peace treaty with an Arab state," stated Mr. Levy.

"We should not suppose that the Palestinians have said yes to fundamentalism. They have done what any other people would have done in these circumstances. Discontented with the leadership of the PLO, they voted for the only available alternative," he continued.

Mr. Levy believes that the Palestinians have to change much of their behavior to advance the peace process. He considers, however, that it is incumbent on the Israelis, as the occupiers, to take the initiative. Unfortunately, he does not see appearing on the political horizon leaders "courageous" enough to say that "the solution absolutely calls for a Palestinian state and the return to the 1967 borders."

Along this line, he is not astonished to see Kadima, the new party founded by Ariel Sharon before being laid low by sickness, declining in the Israeli polls. http://www.ledevoir.com/2006/03/06/103667.html?362