Interview with Hooded symbol of Abu Ghraib on imposture allegations 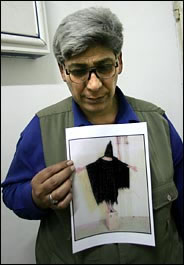 Interview with Haj Ali on the Pentagon's imposture allegations

What is your reaction to the allegations in several newspapers based on US military sources, that you are not the man on the photos that became the symbol of abuse and torture in Abu Ghraib?

Haj Ali: The truth to this is that I was not the only one who was tortured in this barbaric fashion. Almost all prisoners in the part of the prison that I was familiar with were tortured in this way. That doesn't change the fact that I was one of those who had to stand on that cardboard box, with a black hood placed over my head and electrical wires attached to my hands. As an Iraqi person who has gone through Abu Ghraib, I represent all those tormented people.

What is the reason for this campaign to discredit you?

Haj Ali: First they denied ever having tortured people in this way. Then they claimed those were just isolated cases. Now they admit that they have tortured many, many people in that way. They do so to discredit us, but on the other hand, it also means that this form of torture was not an isolated case, is made public. That is a result of our campaign work. Since my release and the founding of our Association of Victims of American Occupation Prisons, we have had 1,300 activities to protest the occupation and especially the private torture companies whose services are employed by the US military. Nobody could imagine that our small Association would have been able to do all that, without any official financial assistance. By dogged perseverance, donations and help from friends and some media, we have achieved something, even in the United States. We raised our voices and thePentagon doesn't like that.

The New York Times alleges that the man on the photograph is in fact Abdou Hussain Saad Faleh.

Haj Ali: I know that man. There are also photos of Said Saleh Shain from Mosul. They gave him the nickname "Joker", and he was tortured in the same way. There was also someone called Saddam Rawi. They attached the electrical wires to his ears. Still today, he has neurological problems, and he has brought suit at the United Nations.

Haj Ali: The lawsuit we filed is definitely one reason for the current smear campaign. We are an independent NGO. Many have tried to buy us, without success. The suit was brought a year and a half ago in the US. 200 cases were filed as a class-action lawsuit. Now we have brought fifty more former prisoners, among them several women, from Iraq to Jordan. And we have published a comprehensive documentation about the abducted and tortured, the victims of American policies.

Have you also sued torture contractors?

Haj Ali: Our campaign is directed especially against Titan Group [SanDiego]. They are a private company conducting interrogations in the prisons. They contract criminals, who extract information from the prisoners using the most brutal methods. We are well aware that the United States is run with the mentality of a corporation. Important motives for the war against Iraq were the interests of those corporations: first of all Halliburton, which is directly owned by Dick Cheney, and all the companies associated with the Bush family. The United States cannot accept that their companiesare targeted. It is a capitalist regime based on corporate profits, and complete disregard for the needs of human beings.

What has happened to your organisation?

Haj Ali: Our office in Baghdad has been attacked and stormed six times by security forces. Each time, the offices were devastated, and each time, they detained several of our leading members. Nevertheless we have succeeded to carry on.

What are the concrete charges against you?

Haj Ali: It has been enough to announce membership in our association. They demanded that we change the name from "occupation" to "coalition". They can't accept even the word "occupation".