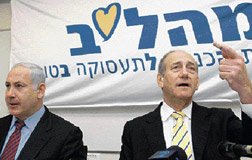 Replying to the military radio’s question, that’s whether the future Palestinian prime minister might be a target for preventive homicide or not, Mofaz retorted: “Should Hamas choose the terrorist path, we won’t make any distinction between political or not political leadership. Hence, none of its members will be able to benefit by immunity.”

This is not the first time that prominent figures from Israeli politics use a threatening language against Haniyeh, regarded amongst Hamas’ sleaders, as a “moderate” and “pragmatic” , according to the definitions which appeared even in the Israeli press.

Some days ago, by raising his voice far beyond the on average boring tone of the present political debate and by evoking the security issue, a crucial matter such as in every other Israeli canvas, the former Shin Bet’s chief, Avi Ditcher, has felt it his duty also to state: “If Haniyeh and his fellows keep up their terrorist and murder policy even while at power, they’ll end up in prison or be with Ahmed Yassin. ”

It may not be a coincidence that Mofaz and Ditcher, the latter regarded as the conceiver of “preventive killings”, are both Kadima’s candidates , the party set up by Sharon around a platform made up of further probable unilateral withdrawals, even if it is today utterly lacking “King Arik” ‘s charisma.

According to last polls, Kadima seems to be losing ineluctably ground, even if only in favour of undecided people.

Thus, whilst Hamas has been bound for more than one year to the truce fixed by Sharm el-Sheik summit, held in February 2005, in Israel there are those who are already fancying the revival, from the Islamic extremist group, of terrorism and armed struggle, as well as, obviously, the failure of the several diplomatic undertakings carried out to verify the Islamist leaders’ willingness to give up their rejection of the Jewish state and start the negotiation.

Actually, the line adopted by Ehud Olmert's government towards the unexpected victory of Hamas in the Palestinian scene, seems to be, according to some of the Israeli observers themselves, quite tottering, not to say contradictory.

Immediately are decided unilateral sanctions against the PA, yet later it’s acknowledged that a humanitarian crisis in the territories might materially and politically be turned against Israel.

The aim is that of creating a political and economic isolation around Hamas, though countries that are, as Turkey, important to Israel also as concerns regional alliances picture or that are wholly important , as Russia, are willing to engage in dialogue with the religious extremist group.

As Israel stops the payments of taxes and duties drawn on PA’s behalf, the EU first and then the World Bank rush to supply the revenue of PA which has nothing any longer to pay the wages of its 140 thousand employees. It’s reckoned that one out of four Palestinians’ subsistence depends on that money.

Through a generalizing remark that was criticised yesterday by Shimon Peres, the PA is de-legitimated as a whole (“terrorist authority”) and his president Abu Mazen regarded as negligible by the Foreign minister Tzipi Livni.

On the contrary, Peres states that Abu Mazen must be backed up and, in substance, that one mustn’t throw out the baby with the bathwater.

Meanwhile, the war against the Islamic Jihad, which hasn’t been stopping to launch its qassams upon the Israeli territory, goes on.
Security experts don’t mince their words and speak of a third Intifada while Olmert threatens to react vigorously. Just as past Monday afternoon, when a missile fired by an Israeli jet against two Jihad fighters while passing through a Gaza’s crowded quarter has killed, besides the two men, also three innocent civilians: a child of 8, his brother of 12 and a passer-by of 21.

In a public meeting before the families of Palestinian prisoners locked up in Israeli jails, Mahmud Zahar, the Hamas member whose name has spread as a possible candidate for the Foreign Affairs ministry, has promised that the new government will never cease demanding the release of the prisoners, using every possible means, “including—his menace is—settlers and Israeli soldiers' kidnapping”.