in the picture, Yossef Ovadia, Shas leader: A vote for his party can guarantee you heaven. How's that for an electoral promise! 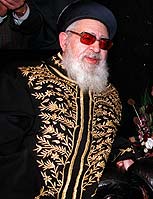 JERUSALEM—On the chipped walls of Mea Shearim, the quarter where ultra-orthodox Jews live, one of the most typical parts of Jerusalem, there is not even one electoral poster. The parties haven’t invested money to stick them up because the ultra-orthodox people either don’t vote or they vote massively for the two religious parties, Shas and United Torah Judaism.

Not voting are the most vehemently anti-Zionists, that’s the two or three hundred families still refusing the state of Israel and embodied by the “Guardians of the city” movement.

Instead, all the others massively vote, according to their origins. The Eastern or Sephardi Jews for Shas and the Ashkenazi ones for UTJ.

There is no absenteeism, never, as their rabbis’ suggestions are literally obeyed. And it’s about thundering advices. He who votes for Kadima, as Rabbi Ovadia Yossef has been saying for days, will end up to hell whilst the vote for Shas will lead directly to heaven.

Ultra-orthodox Jews apart, the rest of the constituency has never seemed to the experts so much unsettled and unsteady as this time.

Polls are continuously and abruptly swinging, as if the Israeli woke up each morning with a different vote intention. Yet, notwithstanding such a restlessness (and, provided clamorous surprises when between Tuesday and Wednesday night the votes will be counted), the general opinion is that to gain the majority of votes will be Kadima, the party founded by Sharon some weeks before his fall into coma.

Hence, it should be Kadima to represent the core of the coalition government which will be leading the country in this umpteenth crucial phase of its history. And it’s expected that the Prime Minister will be Ehud Olmert, Sharon’s successor, a figure who is almost unknown outside Israel. Thus, 24 hours to the vote, the question I’m trying to answer to is: who’s Olmert?

Who is this “bon vivant”, 60 year old man, a magnificent house, a very fashionable wife, it’s unknown if he is more keen on basketball or football, and who has no physical or career likeness with the Israeli former prime ministers.

Olmert, in fact, is not one of the Israel founders as other prime ministers, from Ben Gurion to Begin and Peres, were. He’s not a glorious military man like Rabin or Barak or Sharon. His rise has been slow, with no really meaningful phases, and they have completely happened behind the scenes.

What is known is that he has always had a seat in the parliament during the past thirty years, that he’s very skilful in parliamentary manoeuvres, that he is a tough negotiator. Yet, we know something else. Above all, it’s known that his job as a lawyer has put him at the center of several scandalous crossings between business and politics and that, as Knesset member, as Jerusalem mayor and as minister, he has gone round with an impressive good deal of shady figures. Something that has brought him endless times before a law court to answer for undue financial support in favour of his former party, the Likud, and for shady real estate transactions in Jerusalem.

Always acquitted, it’s true. But too many times suspected, by investigators and public opinion. Because his property, today, is not that of a normal political man. It’s a vast estate, maybe a very vast one.

There is no taxi driver who doesn’t repeat this to me, there is no daily which hasn’t published some story about the vortical but little clear turnover in which the former Jerusalem mayor has had some role.

Just yesterday morning I was talking about this with Shlomo Avineri, the most outstanding one amongst the Israeli political experts, in a Rehavia café. And Avneri, rather than going into long arguments, proposed a couple of comparisons.

“Think of a kind of Truman,” he was saying “or a Lyndon B. Johnson. Both were the heir of two men of great charisma and prestige, the former of Franklin D. Roosevelt and the latter of John F. Kennedy, and also they were unknown in the international scene. Both were political foxes, cunning goers in political rooms, sometimes involved in not so lawful relations with financial environments.

Now, what was these two figures’ typical feature, in respect to the halos of their predecessors? They had a pragmatic frame of mind, a deep knowledge about the way that power must be managed. And, by and large, they were useful to their country.

Well: Olmert might turn to be a character of this same type, exactly a pragmatist, less ideologized or venturesome than other former prime ministers…..”

A center man, many of my Israeli acquaintances go on repeating. And “center” in their arguments, sounds like a propitiatory word, a sort of providential formula: the sign of how the Israeli society has been diving itself from the old dualism which had marked during the past three decades the country's political life.

“The real newness,” Prof. Ephraim Yaar, the most trusted amongst the Israeli poll-makers, was in fact was telling me yesterday in Tel Aviv, “is this push by the constituency towards the center. In my opinion, the emergence of a historical necessity of placing oneself halfway.

Therefore, halt to the left—Peres’ and Barak’s Labor and the Meretz party pacifists—which has tried, without succeeding in it, the path of negotiation with the Palestinians. And an even firmer no to the Greater Israel supporters, the right that has never allowed to face seriously the problem of giving back the Occupied territories.”

The argument seems to be clear.

Yet, what does the “center”, that’s to say Kadima, mean nowadays in Israel, in terms of political decisions to take as regards the conflict with the Palestinians?

It means the unilateralism choice. Olmert, as a matter of fact, doesn’t speak of peace, he doesn’t announce the slightest negotiation with the Palestinian side. He has clearly explained, through a decision that is unusual in the electoral agendas of the parties standing for a country rule, what he means to do. And he has promised to do it over the four years of his mandate.

Progressive withdrawals from the West Bank, that Israel has been occupying for almost forty years; pulling down many settlements and about 70 thousand settlers; definitive borders route of the Jewish state. All this through no negotiation with the Palestinians at all: neither with Hamas leaders nor –should the Hamas-led government fall—with the moderate faction of Mahmud Abbas. Nothing. Only unilateral measures.

Yet, can a conflict as the Palestinian-Israeli one be really settled in this way?

“I can’t answer this question” Professor Yaar was saying, “I can only tell you that, if on one hand the 36% of Israelis still profess to be in favour of a negotiation, were it even with Hamas, on the other hand, those who approve of the unilateral decisions plan are by now about 50%. The prevailing trend is this: to break off with the Palestinians, to finish the wall works, to withdraw from the two thirds of the Occupied Territories. Those who want to keep the occupation are by now only the extreme-right fringes, the settlers’ two small parties. It’s true, Likud also holds that, at least for the moment, the occupation of the territories is a security guarantee: but those are only words. The leadership knows well that most of territories will have to be evacuated, sooner or later,”

This is how most of Israelis are going to the elections tomorrow. Without any hope for a peace accord with the Palestinians, inclined to enclosing itself behind the cement blocks and the fencings of which the wall is made up, as if not talking with the rival might help to make the rival vanish from the stage.

In short: people vote for the seventeenth Israeli parliament while the quarrel between Israelis and Palestinians remains more or less the same—that’s to say, at least for the moment, irremediable—as it was when Ben Gurion opened in 1948 the first session of the first parliament of the Jewish State.