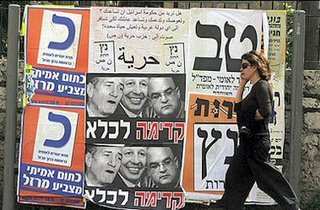 There is going to be the great absentee at the upcoming elections of next Tuesday 28th March. And it’s not Ariel Sharon, forcibly and relentlessly kept alive in order to serve as a symbol for his party, Kadima—in reanimation ward of Hadassa hospital.

No: the great absentee is the co-called peace process. The negotiation for a settlement of the conflict in which Israelis and Palestinians have been struggling, dripping with blood, for about sixty years.

This is what immediately leaps to the eye, by judging the electoral eve. And this is what precisely strikes: the fact that people is not speaking any longer about a peace negotiation.

In the other occasions in which it occurred to me to attend the political elections in Israel, that wasn’t the case. The only ones not speaking about peace were the extreme right parties which rejected, as they are doing today, any return of the occupied Territories.

Yet, the two main parties, Likud and Labor, used to put forward agendas in which, as well as security promises against Palestinian terrorist attacks, they would always let people harbour the hope of an accord to put an end to the conflict.

Even the right of Likud or the Sharon of his hard-liner days used to refer to a “peace plan”. First—up to 2004—to Oslo Accords and then to the “road map”: negotiation plans left for years to get dusty on the carpet but ready, at least in theory, to be revived.

And in fact, even if with some difference in emphasizing, Likud’s and Labor’s slogans were similar: “Peace and security”, “Only security can lead to peace”, “There will be no peace without security”.

Nowadays, the concept itself of a peace plan seems to have vanished.

At the first performances of his electoral campaign, Amir Perez, the Labor’s leader with a pacifist past, had said many times that he would be willing to restart talks with Palestinians. Yet, the drop of his party ascribed by polls has made him change his mind and his slogan has turned in : “Defeating terrorism, fighting poverty”. No hint, hence, to a possible negotiation. And even the Meretz, the most sided on the left of the political spectrum, once the bravest in demanding the withdrawal from the Territories, this time has focused its campaign on civil rights: its slogans is “the person at the core”, the main issue is homosexual marriages.

No: I have been talking about it for three days with my Israeli acquaintances, I have been getting several electoral posters translated for me and I have been reading dailies in English editions: yet, as to the peace process, not even a hint.

Let’s take Kadima as example, the party which is expected to win the elections.

Founded on the political legacy left by Sharon, Kadima’s agenda provides for neither negotiations nor possible accords with the Palestinians. It provides for—as Sharon’s successor, Ehud Olmert, has already overtly and clearly declared—only unilateral decisions by the Israeli side: the definitive borders of the Jewish state, a military presence in the most strategic zones, the annexation of some parts of the West Bank and the withdrawal form other ones.

Still, all this without having a chat with the Palestinian part at all. No meetings, no dialogue, no negotiations. Backs turned.

On the other hand, the position prevailing in the Palestinian front is perfectly symmetrical.

There, elections have already taken place, have been won by Hamas which is not willing to negotiate with an Israeli government. Hamas doesn’t recognize Israel, doesn’t regard itself bound by the accords which have previously taken place between Israelis and Palestinians, and, even if it is concretely willing to defer the truce on course for more than one year, it doesn’t mean to give up the armed struggle.

The reason why Hamas has won is because the Palestinians have understood that, during the thirteen years of Oslo accords, the “peace process” has been nothing but a sequence of bloody clashes and frail truces. It has done nothing but make the situation in the occupied territories even more hard and unbearable.

Therefore, Hamas’s rise ensues—neither more nor less as Kadima’s performance in Israel—from the havoc of any project of negotiated peace.

Also this must be the reason why the electoral here in Jerusalem seems to be so unusually apathetic. The less lively and the most feeble one that the Israelis can remember.

Of course, too many things have occurred during the past seven months. The Gaza retreat with the split between lay people and religious Zionists, Sharon’s splintering from the Likud and the establishment of his new “centrist” party, his first ictus and the second one, which has determined his disappearance from the political scene, and, in the end, Hamas’s victory at the Palestinian elections.

From this long series of political shocks, it was natural that some tiredness would emerge. And upon this tiredness, the by now prevailing mood of the Israeli society has been shaping. The spur to get away both from Palestinians and the bigotry of religious Zionists and settlers. That’s to say: no more dreams about a Great Israel and giving up a part of West Bank but, at the same time, the door shut before the Palestinians’ face.

The newness is this. The “centrism” in which, according to polls, most of Israelis identify themselves. And which finds in Kadima’s agenda and in Sharon’s successor, Ehud Olmert, its political means.

End of the wait and see policy but only through unilateral decisions. Withdrawals in groups from West Bank, the returning on this side of the wall of at least 70 thousand settlers (out of 220 thousands today living in the settlements), military posts in the crucial areas.

“There are no other less hazardous choices” I’m told by Alexander Jacobson, professor of ancient history at the university of Jerusalem and bright editorialist from Haaretz : “going on with the occupation” Jacobson clarifies “ would be tantamount to keeping a time bomb in one’s own lap. Negotiating with Hamas government seems to be far-fetched. Thus, either we’ll go ahead as we have done up to now through expanding the settlements and the creeping annexation of the Territories (that would be, I repeat, a foolish act) or we’ll put an end to this deadlock through unilateral moves, without negotiating”.

In short, the Kadima's line.

A line hard to approve because it’s obvious that, without an agreement with the Palestinian side, the conflict will be going on pouring forth the same, and maybe more tragic, violence of these past years.

Yet, it has surprised me that even the writer Amos Elon, who has never been guilty of optimism as regards the policy of Israeli governments, acknowledges that breaking the impasse might let a glimmer of hope in.

“First of all—Elon says—the end of Great Israel taboo, ie. the giving up of a “historical right” over Biblical lands, is a new fact”. Much more meaningful than has been the Gaza pulling out. Then, it’s possible that withdrawals, even if partial ones, may shake the pond, provoking a virtuous dynamic”.

The only sure thing is that, four days to elections, their outcome remains still quite unforeseeable.

Even because the polls swing as a mad compass needle and record the possibility of a wide abstention.

Kadima, which until the day before yesterday seemed to be sailing before the wind, now is dropping. The Labor party, with which the Sharon’s heirs are likely to form a center-left coalition government, is trudging.

Thus, it seems to be more and more improbable that the two parties may manage to have a majority in the parliament without making room in the coalition for the religious ones or the Ysrael Beiteinu of Avigdor Lieberman, the right-wing party which catches the vote of the nearly whole Russian population. And, in that case, there would be a government as have there been many other ones in Israel ( and many in Italy) , entangled with the clashes between its own members.

Yet, that the formations still opposed to the giving up of the occupied Territories (from Likud to the settlers small parties) are crumbling seems to be undoubted. Maybe for the demographical risks, the fear of becoming a minority amongst an Arab majority, or maybe the intention of putting an end to the haemorrhage of funds that today are used to support the settlements, the fact remains that the Israelis are by now aware of the unendurable burden of the occupation. And maybe aware of the fact that almost forty years of economic sacrifices, of young human lives fallen on both side of the conflict and of unremitting tension, have been a terrible mistake.