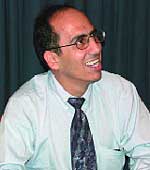 The Day published a commentary by the editors titled "Visions for Middle East Peace" followed by seven contributed editorials totaling over 8100 words. The amalgam of opinion ranged from advocating the Rand program for connecting the Palestinian cantons/ghettos/reservations to calls for compensating Palestinian refugees from International sources and settling them in places other than their homes and towns from which they were evicted.

None of these articles was by a Palestinian (Christian or Muslim). We in the local Palestinain community were tempted to try to write an article responding to the various false assertions and misdirected plans advocated. Then we thought perhaps that this would be too long. Besides, it is like native Americans trying to respond to a series of articles authored by white Europeans in a newspaper in the mid 1800s debating what to do with the native Americans. Instead, the advice of the late Professor Edward Said of Columbia University was to simply tell our long suppressed narrative.

I am a Palestinian Christian, an American citizen, and above all a human being not merely an object for management. The larger Palestinian community consists of nearly 9 million people (some 2000 live in CT); two thirds of us (Muslims and Christians) are refugees or displaced people. This displacement of native people is the core of our struggle. The displacement was the natural and predicted outcome of Zionism as Zionist leaders themselves acknowledged and as Israeli historians now document. After all, how else can you create a state for members of a particular religion (Judaism) on land that was inhabited for millenia by natives of various religions (mostly Muslims and Christians, and very few native Palestinian Jews).

We Palestinians, like all people under the yokes of colonial rule, yearned and struggled for freedom and independence (first from Ottoman then British rule). When Israel was established by force of rms in1948 on 78% of Palestine, over 500 Palestinian villages and towns were ethnically cleansed (see www.palestineremembered.com). Palestinians were literally pushed into the sea (at Jafa refugees were loaded into boats to Gaza in 1948); they were not the ones who wanted to push others out. My grandfather's best friend in school (under Ottoman rule) was Jewish. We coexisted for millenia.

Anyway, Israel now has the fourth or fifth strongest military in the world and is well stocked with WMD including over 300 nuclear weapons and the Palestinains are refugees, displaced, and those who remain live in shrinking open-air prisons surrounded by massive walls, ditches, and fences (see www.stopthewall.org). Israel is strong and able to do this only because it is funded and supported by the sole remaining superpower using our tax money.

Our Palestinian struggle was a struggle for RETURN and self-determination as enshrined in International law. We were not yearning for a"statelet" called Palestine. After all, the countries and borders in the so-called "Middle East" (a colonial designation) were colonial machinations to "divide and rule". This started with 1916 Sykes-Picot agreement to divide Arabia into British and French "protectorates" and continues today with US and British designs on places like Iraq and Jordan. As an example, it is no surprise that a monarchy in Jordan is kept in power with US government support but only as long as they push the "Jordan First" government campaign and help the Israeli economy with full trade and normalization. Open borders and trade between Israel and Jordan does not include Palestinians and does not include open borders and trade between Iraq and Jordan (no Arab Nationalism allowed in Iraq or Jordan).

But let me go back to the issue of Palestine. We Palestinians were interested in having our basic human rights implemented per international law. This includes the right to return to our homes and lands (UN resolutions like UNGA 194), the rights to be treated equally regardless of religion (e.g. Universal Declaration of Human Rights), and the right to self determination (UN Charter and a number of specific UN resolutions on Palestine). Basic human rights cannot be sacrificed in a futile attempt to protect discrimination and racism. If one is really interested in a two state solution, then issues like borders and economies and rights of people to live on their land are delineated well in UN resolution 181 (unfair as it maybe by allocatingonly 45% to a Palestinian state).

Palestinian leadership, with support from the United Nations, was willing to compromise even more: a state on 22% of Palestine (the areas occupied by Israel in 1967 including Jerusalem) and a refugee return based on resolution 194. All Arab countries have also accepted these far- reaching compromises. But Israel refuses because it kept building colonial settlements on Palestinian land making such historic compromise now virtually impossible.

40% of Palestinians consider Arafat and Abbas to have sold out Palestinian liberation for a truncated state even though Israel would not even agree to this far-reaching compromise. 450,000 colonial Jewish settlers now live in the occupied West Bank. The Sharon/Peres plans (funded by our taxes as always) is for a token number of settlers to be removed to make the Palestinian Ghettos slightly more contiguous and viable as markets and cheap labor for the developed Israeli economy. It provides a last ditch effort to salvage the otherwise failing Zionist ideology based on the concept of maximum geography (for Jews) with minimum demography (of non-Jews living in the Jewish state). But as most people (including Amnesty International) know, and history shows, those who sacrifice freedom and human rights for a false sense of security will get neither security nor peace.

The net result is that land was historically taken and continues to be taken from native Christians and Muslims and turned over for Jewish settlement. New Zionist immigrants who settle on Palestinian lands are indoctrinated in messianic concepts of redeeming Eretz Yisrael(the Land of Israel, Israel is defined as the nation of Israel to include all Jews regardless of where they live). Redeem from whom you might ask: goyim (gentiles) who by definition have no equivalent rights to the land of "Israel". This logic justified the atrocities committed daily against native Palestinian Christians and Muslims for the past 57 years (most of it hidden from the US public by a compliant media). World sympathy was to the victims of this historic injustice and native resistance were as predictable as happened with South Africa under apartheid. It is thus not surprising that the US andIsraeli governments stand isolated in supporting oppression. A true vision for peace is rather simple. If you want a real road map to peace, take the Universal Declaration of Human Rights. Just like South Africa was not a struggle between white and black but a struggle for ìequality and justice, the struggle here is not between Jews or even Israelis and Palestinians (Muslims and Christians) but a struggle also for equality and justice.

Many Israeli Jews (as well as essentially all Palestinians who live within and outside the borders dating before 1967) believe the essence of the conflict resolves around shedding the discriminative practices of the past. Such moral stances stretch from the Israeli group that is publicizing the Palestinian Nakba (see http://www.zochrot.org/, what Israeli Professor Baruch Kimmerling termed the Palestinian "Politicide") to the Israeli Artists' declaration:"If the state of Israel aspires to perceive itself as a democracy, it should abandon once and for all, any legal and ideological foundation of religious, ethnic, and demographic discrimination. The state of Israel should strive to become the state of all its citizens. We call for the annulment of all laws that make Israel an apartheid state, including the Jewish law of return in its present form" (artists'Declaration 2002). Of course one need to tackle issues of why people do what they do in developing tribalistic and fear based and chauvenistic political structures. Nationalism is a fluid phenomena that changes from local/geographic, to language based (e.g. pan-Arab), to religious based (ideology of Osama Bin Laden of pan-Islamic nation or Zionism of a Jewish nation). I urge readers (especially Jews) to read the books of Jewish theologian Marc Ellis about such issues. But, one need not be anti-nationalist or even anti-Zionist in the 21st century to to call for basic justice and equality. Many Israeli Jews are now post-Zionist who recognize that the mindset of a Hertzl or Ben Gurion was shaped by their own upbringing and circumstances.

Instead, now one can look to a future where people can coexist based on human rights and equality (a model of dissolving borders exist in Europe). Most Palestinians never argued for political separateness (us here, them there). We have always welcomed persecuted people and integrated diverse communities in Palestine: Druze, Ethiopians, Circasians, Copts, Syriacs, Hebrews, Ashkenazim, Mizrachim, Samaritans, and Armenians (who came after the pogroms and genocide in Turkey). The problem arise when one group wants to dominate the landscape and remove others. Rather than villifying others, we must advance real peace scenarios and not mere pacification. These would grant human, civil and religious rights for all people. Equality is the key. No long-term peace can arise while laws exist that prevent natives from returningto their land while saying that any Jew (including converts) can acquire automatic citizenship and live on confiscated Palestinian land. Like in the struggle against apartheid South Africa, everyone (Israelis, Palestinians, Americans, all others) needs to take a moral stand based on the principle that there is no room in the 21st century for racism and discrimination.