Pro-Israeli bias in Italy is not an exaggeration, it is a program 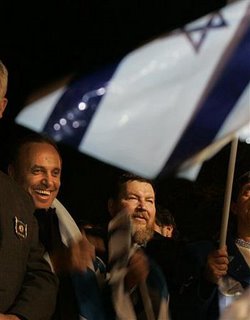 in the photo, at the Pro-Israel demonstration, the Israeli Embassador to Italy Ehud Gol with Giuliano Ferrara (La7 News director and organiser of the march)

I just finished reading a very interesting article that an excellent Turkish compendium site Perspektifs in Foreign Policy about Islamophobia and Anti-Semitism. It got me to thinking about a few things, such as discrimination, the idea of sects and cults, religious intolerance and race. Of course, these thoughts and musings are far from original, but once in a while, it is useful to reflect upon what we take for granted, and what we get scandalised over.

One example of what I want to say is the “protective” approach towards certain religions and the “insensitive” approach to others can be demonstrated in the line from a very popular film by Aldo, Giovanni e Giacomo, “Tu la conosci Claudia?”. In this film, the three protagonists are discussing Claudia, and how at one point she states that the only thing that she can’t stand more than her ex-husband are Jehovah’s Witnesses. (That line provoked laughter in the cinema). Now, Aldo, Giovanni and Giacomo are really intelligent comedians, they usually take the common Italian stereotypes and ridicule them in a non-offensive way. They can do that, because they are Italians and Italians are famous for self-irony. But, I just have to wonder, what did the Jehovah’s Witnesses as a group do to deserve such a putdown, even if it was pretty mild? Would we laugh if the same line was the only thing that she couldn’t stand more than her ex-husband was Jews? I don’t think a line like that would have escaped the censors. The feelings of Jehovah’s Witnesses are not protected as if they are a group whose feelings don’t matter and a religious group that can be ridiculed as a whole, globally condemning them as something that we understand is negative in a natural way. Everyone seems to think Jehovah's Witnesses are invasive, it seems, and therefore, a bothersome group of people.

Why could this be? Is it that it is considered “normal” to detest the Jehovah’s Witnesses? Or could it be that they are powerless against such smears?

I took a look at the European Council’s page on discrimination, Italy and didn’t find anything about Jehovah’s Witnesses or even about Arab or Muslim discrimination. I find that pretty interesting, since at least where I live you see on a lot of doorbells a little sign that states, “Jehovah’s Witnesses DO NOT come to call!” I don’t know, I sort of think that kind of thing is a little offensive, but maybe I’m being too sensitive. What if it said “Jews, DO NOT come to call!” I think there would be a segment dedicated to it under the large category of Anti-Semitism, which generally consists in graffiti and slogans at football matches.

Speaking of football matches, I do recall a banner calling a goalkeeper of the opposing team “Black”, but don’t remember any kind of issue made of this. There is something different about the way the public treats discrimination against Jews and discrimination against others, and part of it must have to do with the fact that in fact, the majority of the news in Italy is indeed filtered through Jewish editors. The main editor of the first channel, Clemente J Mimun is an Israeli citizen, Canale 5 (the major private channel) has as it’s former major news editor Enrico Mentana, who now presents the channel’s only news talk show, a self defined “secular left Jew”. La7 the third pole, has as its news desk Gad Lerner (another Israeli citizen) and Giuliano Ferrara (who sponsored the Pro-Israel march a few months ago). The newspapers are pretty much the same, the most important national paper, La Repubblica is owned by a Jewish family, the other major paper Corriere della Sera is directed by Paolo Mieli (former director of the first National television channel) who has expressed that he was a victim of anti-Semitic smears (a graffiti in an elevator) during the period of his nomination to direct the entire agency of Italian national TV. I could never see the connection to his “not being nominated” and the graffiti, which had been given so much emphasis as if this was the most important issue ever to have befallen the Jewish community in Italy. In other words, I don’t think anyone backpedaled on the nomination, because a graffiti was found and given emphasis on national news as if it should concern all of us and make us support without any hesitation the nomination of Mieli and to imply that if he were not appointed, it was because of anti-Semitism and no other reason.

The examples are actually endless of the huge influence that Jews and Israelis have in Italian communication. It is indeed huge if there are 29,000 Jews in Italy out of a population of 58.462.375, something like 0.052% of the population. Jehovah’s Witnesses number 400,000, with 363,000 who go door to door, thus becoming target of these exclusionist doorbell announcements. Out of a population of almost 58 and a half million people, it does seem like the “threat” of having an invasion of Witnesses is slim indeed, although it happens to all of us at least once a year. Yet, each and every day, a message in favour of Israel is beamed directly into our homes at all hours of the day and night. We are also instructed that discrimination against Jews is worse than discrimination against other minorities. Anyone can see that the positions of power in the Italian mass media are distributed vastly in favour of the effective representation of the Jewish, and especially, Zionist, population. It is clear that if such a comment made to incite a chuckle in the Italians could never be directed towards Jews, even though their presence and message is overwhelmingly dominant.

What is wrong with the message? I am against discrimination, just as I hope all the rest of us are. But, I am against the assumption that there are certain ideas of discrimination that are more important. When yesterday the national news reported on the firecrackers in Nazareth, they referred immediately to the perpetrator as simply being “mentally unstable”, and not motivated by racist intentions or seeking to ignite racial unrest, which is quite the opposite of how anti-Jewish graffiti is treated, stemming from deep seated racial hatred in their eyes, and we are made to feel scandal and shock. Following the killing of eleven people in Libya outside the Italian Consulate, instigated by a gesture on Clemente J Mimun’s PRE-RECORDED transmission, where an Italian Minster flaunted his anti-Muslim t-shirt, the authorities immediately spoke against racial hatred. Where did they go? Our President Ciampi went to the Synagogue of Rome! http://it.news.yahoo.com/23022006/201/ciampi-sinagoga-dialogo-popoli-culture-religioni.html When Thursday the evening radio show, a guest mentioned that in Israel the water is controlled by the Ministry of Agriculture, and in the West Bank, by the Israeli Ministry of Defence, making water an effective military weapon against Palestinians, rather than allow the comment to continue, the phone call was abruptly cut off. We are not allowed to even think of such things. This is the state of the brainwashing present in our mass media, examples are far too numerous to even cite, and it is that way because those who have the power want this state of affairs because they have a vested interest in Zionism and Israel, and no kind of comments challenging that can even be voiced or allowed to be heard. We are treated as if our critical capabilities should not be threatened with reality or with making a connection between a pro-Israel platform of our mass media and the promotion of the idea that there is deep and irrational anti-Semitism in Italy, but other kinds of discrimination are completely ignored, as if there is not a problem of the sort.