Meshaal - Hamas is ready for peace, under these conditions 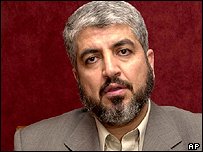 “HAMAS READY FOR PEACE, HERE ARE OUR CONDITIONS”

DAMASCUS—In the fortress-villa from which he rules in exile, Khaled Meshaal is in a stormy mood: “That putting us under siege were our foes, America and Israel, was quite expected. But that some Palestinian elements lent themselves to supply the Trojan horse, I didn’t really expect this.”

“Yet, those who bet on our defeat are wrong. Hamas government, Insh’ Allah, will be successful, because it has people’s support, because it’s a lawful government and has the capability of imposing a good ruling.”

In the armoured drawing-room, there is the coming and going of the messengers bringing news as heavy as the Middle-East horizon that Meshaal is depicting.

The news gives accounts of fraternal clashes in the Palestinian squares, of the test of strength between government and presidency about the control over security forces, of the arrest by Israel of new governmental leaders, and of the deadlock as to transferring, in the Palestinian territories, the funds raised in order to avoid the humanitarian and economic crisis. The White House’s ban prevents banks from keeping each transaction with the Palestinian Authority.

“We’re attempting to outflank the hindrance through the Arab League’s and aid coming from Arab governments, while one fourth of the Palestinians has been with no wages since March. As you can see, we are not the ones who are starving the population.”

Meshaal, has the victory faded away? From Fatah’s ranks, they are charging you with having already failed.

“Speaking of failure after only three weeks of ruling is quite reckless, isn’t it? Instead, the contrary is true: in spite of appearances, the block against Hamas is going to crumble. The front of international solidarity as to the political and economical support being offered to us is getting wider, we’re receiving openings from foreign Chancelleries.”

Can you provide us with some examples?

“I’m thinking of the Vatican’s envoy in the Holy Land, of other Christian members: it’s a welcome development. A dialogue, both in Palestine and abroad, with European officials and ambassadors, is underway; there’s a first approach with China, the important opening by Russia. As to Italy, we have welcomed the pronouncements by the new Prime Minister, Romano Prodi; we hope the Italian stance will be balanced. In short, I’m quite optimistic.

Yet, you see, the more we succeed in slackening the tight knot, the more the pressure increases. But America, Israel and Europe be aware: the non-stop pressure on Palestine will lead to an outburst in the region.”

Meshaal, you hurl burning words at the Palestinian Authority, you speak of a plot. Is it a foolhardy statement?

“I denounce the positions of some, and I underline “some”, who see the siege and don’t take action, waiting for the time of replacing us. The financial corruption is not a novelty. They have left us with an empty safe. The PA has at its disposal a fund for investments, from which the executive used to draw. The Hamas’ government isn’t allowed to do this. Ask Mahmud Abbas the reason why he doesn’t make use of those funds to pay the wages. If he cares for the nation’s interests, he shouldn’t deprive us of the means of ruling. May he let us re-establish the order by returning to us the authority over the security forces as provided for by law, and call toorder the armed groups plotting the chaos. May the clash befall in the political arena, not in the streets. Meanwhile, I extend my hand, I call on national unity.”

Mahmud Abbas warns that he has the power of dissolving the government.

“He is waving a threat, he means to extort some concessions towards Israel from us.”

Does Hamas keep on rejecting every negotiation?

“Listen, the negotiations, as they have been led up to now, have proved to be unsuccessful. There’s some kind of hypocrisy in those blaming us for refusing Oslo, Camp David and Wye Plantation. After all this negotiating, the peace yardsticks are known to everybody. It’s sufficient to apply them.”

“In few words, they lie in recognizing the right of the Palestinians to live peacefully in a their own state within the borders of the territories occupied by Israel in 1967. Upon this, the consensus is nearly universal.”

Your words would seem to entail Israel’s acknowledgement. Is this a twist?

“Let’s see firstly if Israel is willing to admit our rights. Hamas is conceiving a peace plan: if Israel accepts the tenet of the withdrawal from the territories occupied in 1967, East Jerusalem comprised, the acknowledgement of the refugees’ right to return, the releasing of the prisoners, the dismantling of the Wall.”

Are these conditions inalienable?

“They’re our target, the principle Israel has to accept so as to start a dialogue. All this can happen according to steps to be decided through an accord. Israel must say that it is willing to negotiate this. If it wants peace, we’re ready for it. Or else, we’re going to re-start resistance.”

Nonetheless, do you confirm the choice of the truce?

“We have been complying with the tahdia, the peacefulness, as a strategic choice for more than one year. We’ll be judging the situation from time to time. The tahdia is expired, Israel has broken it and is responsible for the escalation.”

Your government has censured the slaughter in Egypt. What about you, Mr Meshaal?

“I strongly condemn it; it is an horrible criminal act, an offence to our faith. I condemn it just as the attack in Sharm el Sheik a year ago.”

On the eve, a message from Bin Laden was aired. He has also addressed Hamas.

“Everything divides us from Al Qaeda: we’ve chosen the way of polls, of legitimacy. Our resistance is against Israel’s occupation only. I hope we’ll be allowed to choose the law.”