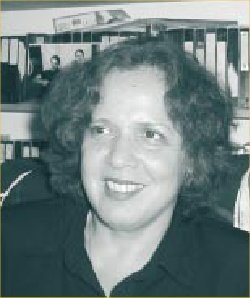 International Women's Day Address to the European Parliament (2005)
by Dr. Nurit Peled-Elhanan
Dear Friends,
Dr. Nurit Peled-Elhanan is the mother of Smadar Elhanan, 13 years old when killed by a suicide bomber in Jerusalem in September 1997. Below is Nurit's speech made on International Women's Day in Strasbourg earlier this month. (last year Ed Note) Please listen to the words of a bereaved mother, whose daughter fell victim to a vicious, indiscriminating terrorist attack. I wish her words will enter the hearts of all peace seekers in our troubled and divided world.

WOMEN
by Nurit Peled-Elhanan
Thank you for inviting me to this today. It is always an honour and a pleasure to be here, among you (at the European Parliament). However, I must admit I believe you should have invited a Palestinian woman at my stead, because the women who suffer most from violence in my county are the Palestinian women. And I would like to dedicate my speech to Miriam R`aban and her husband Kamal, from Bet Lahiya in the Gaza strip, whose five small children were killed by Israeli soldiers while picking strawberries at the family`s strawberry field. No one will ever stand trial for this murder.

When I asked the people who invited me here why didn't they invite a Palestinian woman, the answer was that it would make the discussion too localized. I don't know what is non-localized violence. Racism and discrimination may be theoretical concepts and universal phenomena but their impact is always local, and real. Pain is local, humiliation, sexual abuse, torture and death, are all very local, and so are the scars.

It is true, unfortunately, that the local violence inflicted on Palestinian women by the government of Israel and the Israeli army, has expanded around the globe. In fact, state violence and army violence, individual and collective violence, are the lot of Muslim women today, not only in Palestine but wherever the enlightened western world is setting its big imperialistic foot. It is violence which is hardly ever addressed and which is half heartedly condoned by most people in Europe and in the USA.

This is because the so-called free world is afraid of the Muslim womb. Great France of "la liberte égalite et la fraternite" is scared of little girls with head scarves. Great Jewish Israel is afraid of the Muslim womb which its ministers call a demographic threat. Almighty America and Great Britain are infecting their respective citizens with blind fear of the Muslims, who are depicted as vile, primitive and blood-thirsty, apart from their being non-emocratic, chauvinistic and mass producers of future terrorists. This in spite of the fact that the people who are destroying the world today are not Muslim. One of them is a devout Christian, one is Anglican and one is a non-devout Jew.

I have never experienced the suffering Palestinian women undergo every day, every hour, I don't know the kind of violence that turns a woman's life into constant hell. This daily physical and mental torture of women who are deprived of their basic human rights and needs of privacy and dignity, women whose homes are broken into at any moment of day and night, who are ordered at a gun-point to strip naked in front of strangers and their own children, whose houses are demolished, who are deprived of their livelihood and of any normal family life. This is not part of my personal ordeal. But I am a victim of violence against women insofar as violence against children is actually violence against mothers.

Palestinian, Iraqi, Afghan women are my sisters because we are all at the grip of the same unscrupulous criminals who call themselves leaders of the free enlightened world and in the name of this freedom and enlightenment rob us of our children. Furthermore, Israeli, American, Italian and British mothers have been for the most part violently blinded and brainwashed to such a degree that they cannot realize their only sisters, their only allies in the world are the Muslim Palestinian, Iraqi or Afghani mothers, whose children are killed by our children or who blow themselves to pieces with our sons and daughters. They are all mind-infected by the same viruses engendered by politicians. And the viruses, though they may have various illustrious names--such as Democracy, Patriotism, God, Homeland--are all the same. They are all part of false and fake ideologies that are meant to enrich the rich and to empower the powerful.

We are all the victims of mental, psychological and cultural violence that turn us to one homogenic group of bereaved or potentiallybereaved mothers. Western mothers who are taught to believe their uterus is a national asset just like they are taught to believe that the Muslim uterus is an international threat. They are educated not to cry out: `I gave him birth, I breast fed him, he is mine, and I will not let him be the one whose life is cheaper than oil, whose future is less worth than a piece of land.`

All of us are terrorized by mind-infecting education to believe all we can do is either pray for our sons to come back home or be proud of their dead bodies. And all of us were brought up to bear all this silently, to contain our fear and frustration, to take Prozac for anxiety, but never hail Mama Courage in public. Never be real Jewish or Italian or Irish mothers.

I am a victim of state violence. My natural and civil rights as a mother have been violated and are violated because I have to fear the day my son would reach his 18th birthday and be taken away from me to be the game tool of criminals such as Sharon, Bush, Blair and their clan of blood-thirsty, oil-thirsty, land thirsty generals. Living in the world I live in, in the state I live in, in the regime I live in, I don't dare to offer Muslim women any ideas how to change their lives. I don't want them to take off their scarves, or educate their children differently, and I will not urge them to constitute Democracies in the image of Western democracies that despise them and their kind. I just want to ask them humbly to be my sisters, to express my admiration for their perseverance and for their courage to carry on, to have children and to maintain a dignified family life in spite of the impossible conditions my world is putting them in. I want to tell them we are all bonded by the same pain, we all the victims of the same sort of violence even though they suffer much more, for they are the ones who are mistreated by my government and its army, sponsored by my taxes.

Islam in itself, like Judaism in itself and Christianity in itself, is not a threat to me or to anyone. American imperialism is, European indifference and co-operation is and Israeli racism and its cruel regime of occupation is. It is racism, educational propaganda and inculcated xenophobia that convince Israeli soldiers to orderPalestinian women at gun-point, to strip in front of their children for security reasons, it is the deepest disrespect for the other that allow American soldiers to rape Iraqi women, that give license to Israeli jailers to keep young women in inhuman conditions, without necessary hygienic aids, without electricity in the winter, without clean water or clean mattresses and to separate them from their breast-fed babies and toddlers. To bar their way to hospitals, to block their way to education, to confiscate their lands, to uproot their trees and prevent them from cultivating their fields.

I cannot completely understand Palestinian women or their suffering. I don't know how I would have survived such humiliation, such disrespect from the whole world. All I know is that the voice of mothers has been suffocated for too long in this war-stricken planet. Mothers` cries are not heard because mothers are not invited to international forums such as this one. This I know and it is very little. But it is enough for me to remember these women are my sisters, and that they deserve that I should cry for them, and fight for them. And when they lose their children in strawberry fields or on filthy roads by the checkpoints, when their children are shot on their way to school by Israeli children who were educated to believe that love and compassion are race and religion dependent, the only thing I can do is stand by them and their betrayed babies, and ask what Anna Akhmatova--another mother who lived in a regime of violence against women and children--asked:

Why does that streak of blood, rip the petal of your cheek?