Sam Bahour - Hamas is being forced to collapse, amid humanitarian crisis 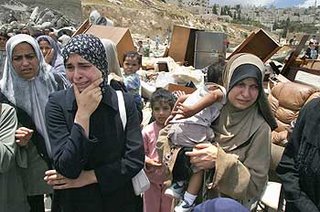 15/4/2006 As many predicted, including myself, the newly elected Palestinian government led by Hamas has already started to show an impressive level of pragmatism, however, Israel and the U.S. seem to not be interested. As a matter of fact the U.S., in specific, is leading a global campaign to isolate the Palestinian government in such a haphazard way, that they are also causing a troubling level of despair among the average Palestinian citizen as well.

The Observer (UK) recently reported on Mr. Yihiyeh Musa, a Hamas member of the Palestinian Legislative Council, who said Hamas had moved into a "new era" which did not require suicide attacks. He was quoted as saying, "The suicide bombings happened in an exceptional period and they have now stopped," he said. "They came to an end as a change of belief." (April 9, 2006). One would think this is good news, especially after the death and destruction such bombing caused. This, one would imagine, should be even better news for Israel and the U.S. given they both have continuously linked such bombings to the reason that the never-ending peace process was unable to actually reach its destination, peace.

But cautious optimism was not the case. Instead, the U.S. wasted no time in dehumanizing the newly elected Palestinian parliamentarians and cabinet ministers. The war of words has been nearly non-stop since Hamas´ victory with all levels of government in D.C. making the case that Hamas can´t change and there is no reason to let them try. Next was a cessation of funding to the Palestinian government and a request for all other countries of the world to follow suit. Then Israel severed all Israeli bank ties with the Palestinian banking system, government related and non-government related. Only yesterday was a U.S. Department of Treasury decree making it illegal for Americans to do business with the Palestinian government. We wait to see tomorrow´s nooses.

All of this as Palestinians watch in dismay, trying to maintain a dignified life under a humiliating military occupation. The international community demanded Palestinians hold free and fair elections at all levels of government, so the Palestinians did just that, and superbly given their reality. But after voting a reflection of their bitter reality of being caged in open air prisons in their own homeland, the U.S. is now punishing them for not voting as the U.S. wanted.

Most Palestinians today are asking simple rhetorical questions, if the past government was, and it was, corrupt -- financially, politically and administratively -- and we voted them out of power, why can´t the U.S. see this as a positive development? What does the U.S. want, to bring back a proven corrupt government that made a mockery of international aid, including U.S. funds?

Also, if Israel has blocked every attempt for Palestinians to solve their issues at the negotiating table, can´t the U.S. understand that the voting Hamas in office was a simple non-violent way to tell the world, end this occupation or take some of your own medicine?

Conditions on the ground have never been so tense. The Palestinian-Israeli conflict, which has always been a political conflict, is being converted, thanks to the U.S. and Israel, into a humanitarian crisis. The fear is that hungry persons react in unpredictable ways.

The greater fear is that if the U.S. and Israel are successful in collapsing the Hamas government and Hamas in turn decides to abandoned democratic means to express itself, we will be back where we started from, suicide bombings killing innocents and setting the agenda from outside any known political framework. Does this serve U.S. and Israeli interests? We are all wondering!

Sam Bahour is a Palestinian-American businessman living in the Israeli- occupied Palestinian city of El-Bireh, the sister city of Ramallah.
He is co-author of HOMELAND: Oral Histories of Palestine and Palestinians (1994) and may be reached at sbahour@palnet.com.