Ernesto Paramo - The man who would deliver his people to Israel 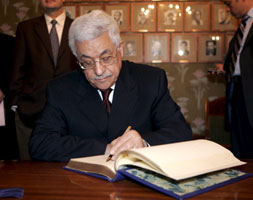 According to a press release, Saeb Erekat, the chief Palestinian negotiator, said today: “President Abbas called Mr. Olmert, congratulated him on the formation of the new cabinet and offered to resume the partnership between the two sides and to resume negotiations.”

Many observers always suspected that Abbas was an instrument of Israeli policy and the man Ariel Sharon hand-picked to take charge of a Fatah government in Palestine that would be subservient to his designs for a greater Israel. However, it seems that Abbas is now confident enough that the Hamas government will not survive for long and that the Palestinian people will be so hurt that they will not complain if he brings back, again, the corrupt oligarchs of the Fatah old guard to run a government of “National Salvation”, that he no longer sees any need for any more pretence.

Before the elections in January 2005, Bush and Ariel Sharon had extreme difficulties trying to disguise in public their intention that Abbas should be chosen as the successor to Yasser Arafat. Since Arafat’s mysterious death, politicians and diplomats praised Abbas as a “moderate” for his longstanding calls to end Palestinian armed resistance to Israel’s occupation. Abbas was also endorsed by US-friendly Arab governments like Egypt and Jordan and openly smiled upon by senior politicians of the European Union.

At the time, the international media rushed to give the election significance: “Palestinian landslide for Abbas” declared CBS news, “Abbas wins his mandate” said the Daily Telegraph and even the Guardian joined in the international chorus by stating in an editorial “Mr. Abbas owes his victory to the silent majority of Palestinians who yearn for normal lives in a state of their own.”

However, the Guardian was wrong, as the silent majority of the West Bank and Gaza remained silent on 9 January 2005. It was clear, even then, that the silence was overwhelmed by the media coverage and propaganda which was indifferent to the way the elections were conducted and the actual count of the vote. This was because both the electoral exercise and its international promotershad very little interest in what the majority really wanted.

The first public admission that there were problems and that fraud was evident came on January 15, with the resignation of 46 members of the Palestinian Central Elections Committee in protest of widespread voting irregularities and intimidation by Palestinian Authority officials. If the resignations showed how precarious Abbas’s mandate was, things got worse when the al-AqsaMartyrs’ Brigade, the military wing of his own Fatah party, defied Abbas’s Call for a ceasefire despite the neverending round of Israeli army killings of both Palestinian militants and civilians all over the Occupied Territories. The al-Aqsa Brigades joined with Hamas and Islamic Jihad to attack Gaza’s Karni border terminal on January 13, killing 6 Israelis.

True to form and to make a point in a very brutal fashion, Ariel Sharon responded by cutting all ties with the Palestinian Authority and let his army loose in Gaza, the day Abbas was sworn into office. At the same time Colin Powell, the then US State Department chief, demanded that Abbas crack down on the militants. All this was a pointed reminder of the constituency to whom Israel and the US believed the Palestinian President should answer.

One more shadow on the question of Abbas’s “mandate” was the popular Fatah leader, Marwan Barghouti, imprisoned in Israel since 2002, who finally withdrew his candidacy under duress in December 2004. Opinion polls always put Abbas as the frontrunner, and yet they also showed that the day before the elections, as many as 80% of eligible voters in the West Bank and Gaza remained either undecided or indifferent to the whole exercise.

Bush described that Palestinian election, as “further proof” that the people of the Middle East want democracy. However, scores of people in Palestine referred to Abbas as the “Palestinian Karzai”, in other words, a US puppet. People in the street could not forget that Bush spent his first term in office marginalizing the last democratically elected Palestinian leader, so why take part in the process when the elected leader can be shot down and declared irrelevant or unacceptable by Israel and the US at will.

Other factors were that the Palestinians supporting the Islamic resistance movement Hamas, decided they were not going to turn out after the party decided to boycott the elections on the grounds that it would give recognition to the Oslo accords to which they have always been opposed. Also the strong showing of Marwan Barghouti in earlier opinion pools showed clearly that even a great chunk of Abbas’s own Fatah constituency was less than happy with his candidacy.So, what in 2005 was a democratic feat (the Israel-US candidate was declared the winner), became a totally unacceptable result in 2006 (The choice of the Palestinian people actually won). In 2005 a clear and shameless fraud took place, in 2006 the cleanest and most democratic election victory anywhere in the Middle East took place. Hamas decided to take part and won. Palestinians were utterly tired of so many betrayals and so much corruption, so they chose to make a clean break. Perhaps they underestimated the unlimited capacity of the Israelis and the US for brutality, stupidity and inhumanity.

While Abbas at his meeting with Sharon at Sharm-a-Sheik, after his election, did as he was supposed to do, smile sweetly and surrender the rights of his people, Hamas has stood firm. While Abbas has used the Palestinian security forces and the al-Aqsa Martyrs’ Brigades to agitate and make problems for the new government, Hamas has been trying to find ways to replace the aid that the US and the cowardly European governments have cut off. Abbas still is smiling sweetly as he prepares for the final betrayal, hoping that Olmert will treat him better than Sharon, at least in public. Hamas needs to make sure that the people do not make any more sacrifices than absolutely necessary, after all they have the ultimate weapon: the ability and the willingness to say NO and mean it.