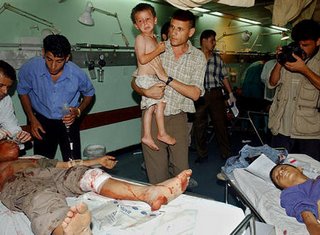 A Palestinian boy, center, cries as he waits to be treated while doctors work on other wounded children at the Shifa hospital in Gaza city Tuesday June 10, 2003 following Israeli troops attack of a Palestinian residential area in the northern Gaza Strip, between the town of Beit Hanoun and the Jabaliya refugee camp. Three Palestinians in their teens were killed and 30 people were wounded, doctors said. (AP Photo/Hatem Moussa)

GAZA—Now, who will tell Halam and Mariam, two sisters of 15 and 11 coming from the village of Beit Hanun to have their diseased blood cleaned up at the urology ward of Shifa hospital in Gaza, that it’s due to the fighting against Hamas’ government that perhaps soon they won’t be allowed to undergo blood dialysis treatment and their lives will be in danger, such as those ones of other dozens of men, women and children who find themselves in the same conditions?

We have come to Gaza to see for ourselves the effect of the so-called economic sanctions imposed on the Hamas-led government, and we find ourselves in a dejected town, sunk in its sandy sarcophagus. On the lamp posts, the symbols of the internal struggle are waving; yellow, green and black flags worn out by the wind which prove, through the portraits of the “martyrs”, the bloody and losing fight between al-Fatah, Hamas and Islamic Jihad: this morning too there have been gunfights, in spite of the vows of a truce.

Judging by the shop-windows, the city doesn’t look poorer than it has always been. The shops are replete with everything that is necessary but customers. There is not enough money for people to buy anything.

Because of the block of economic aid, state employees haven’t been getting their wages for two months.

Yet, the closing (even though in fits and starts) of Karni’s trade crossing has forced even the private field to its knees (the textile industry, farming, the building sector). “People prefer to shut themselves in at home rather than coming out and going about for shopping without being able to buy,” we’re told by our longstanding guide, Mohammed Dawass.

Nonetheless, nothing like Shifa hospital, the biggest one (with its 600 beds and 2,000 patients coming here each day) not only in Gaza but even amongst those under PA jurisdiction in the Territories, can display the distress imposed by the sanctions’ regime.

What results from this is the proof of the theorem, already demonstrated many times and in other different parts of the Middle East, according to which sanctions against governments are actually detrimental to the civilian population and, after all, by striking the weakest, they only strenthen those rulers one would allegedly like to oust.

Wards and corridors are crowed with reporters and cameras, and being aware of the discretion that Palestinians in particular usually adopt and the discretion of Arabs in general, the exposition of sickness tends to be very odd. But couldn’t this ostentation serve as evidence of the degeneration in which the conflict has brought things down to?

The human body has become a weapon of political struggle and redemption.

“Stop attacking doctors” is written on a banner strung between two poles in the middle of the courtyard.

The reason for this is that many times, in the past, the factions’ and relatives’ anger has flung at the innocent health care personnel while this courtyard, that looks like a colonial barracks’ drill-ground surrounded by low buildings with white walls, has been many times the scene of gunfights.

Today, yet, it’s not the internal fighting between Palestinians that draws swarms of reporters to Gaza’s hospital.

“We have run out of some kinds of medicine,” Dr. Jumaa al Saqqa, general surgeon and director of public relations of the hospital, states dejectedly from his office. “This shortage seriously endangers patients’ life. I’m speaking of the urology ward where we are using up Erytropidina’s and Alfa D3’s stocks, and of an oncology ward where we have already had to stop any chemotherapy treatment.”

According to the doctor, four persons suffering from renal insufficiency died because of the lack of medicine.

“In order to be able to go on treating our 227 patients who need blood dialysis, we have had to reduce, from three to two a week, the procedures necessary for each of them. All this sometimes provokes very serious complications.”

It’s not a matter of information provided only by Palestinian sources.

The Israeli branch of the organization, Physicians for Human Rights, has denounced the dreadful situation of Gaza in one of its accounts that was published last week.

In the account, it’s explained how the decision of blocking the financial aid to the Palestinian Health Ministry, since it is part of Hamas’ government, was made in order to persuade the religious extremists to recognize the three conditions put forward by the international community (recognizing Israel, renouncing violence and terrorism, approving previous accords) is tantamount to paralyzing 64.5% of the healthcare needs of the Palestinians.

The Palestinian public health service, as a matter of fact, gets financial support for 7 million and 600 thousand dollars, excepting the wages of health personnel, hires 11 thousand employees (that’s 57% of the entire labour force employed in the health system) and completely covers the expenses required by approximately 20 thousand patients, compelling them, because of the weaknesses of the Palestinian system, to undergo treatment outside the Territories, in Egypt, in Jordan or in Israel.

Closings imposed by Israel, after Hamas’s victory at the polls, according to the Palestinian health authorities, have entailed that, in recent months, 274 patients have been rejected. Even though the different cases were acceptable within the framework of the imposed security yardsticks: over 40 years of age and upon approval by an Israeli hospital for the transfer.

At the oncology ward of Shifa hospital we meet with Rami Ghof, a Palestinian publisher, who informs us about his sister’s case: Rimah Majdalwish, 47 years old and with three children, affected by lung cancer and on the verge of being transferred to Tel Aviv’s Tel Hashomer hospital, but blocked at Heretz’s border crossing.

The existence of several other similar cases is confirmed to us by the director of the Gaza branch of the International Red Cross, Georgios Georgiantas.

Yet, it’s at the urology ward that emergency and pain are mingling with each other. “Also the last probes and machine filters are about to be used up,” says Mazel al Alul, a paramedic in charge of guiding us.

It’s immediately clear that the poorest patients are those who pay the highest price.

Laid down on two parallel little beds, Mariam and Hala have transparent little tubes that connect their hands and legs to the dialysis device. Sunk into the skin which has become grey from the disease, their eyes look confused.

Zahar Shahat, a woman who has been taking care of her husband for years in his weekly ordeal, and this is why she knows everybody here, tells us that the two little sisters come from a very poor family.

So much so that the public mercy ambulance has to go and fetch them every week to take them to the hospital.

Lost in a stretcher covered with a dirty sheet, a baby girl only few months old arrives, accompanied by her tearful parents and doctor Nahla, from Nasser Hospital, the hospital for children.

The girl, Hala, ten months old, has just been diagnosed with a serious renal insufficiency. She is tossing and turning in prey to mysterious aches.

Her father caresses her hair. She will be put in dialysis in shifts, as long as there will be enough medicine for such a thing.

Translated by Diego Traversa and revised by Mary Rizzo for Tlaxcala (www.tlaxcala.es) the network of translators for linguistic diversity.