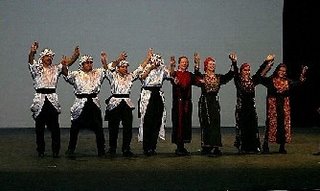 How Palestine Became Israel, part of the Deir Yassin Day 2006 commemorations, was performed at the Bloomsbury Theatre in London’s West End on 9-10 April, and directed by British-Palestinian playwright/director Razanne Carmey and Dan Coleman.

Carmey traveled to Palestine to meet theatre groups from towns, cities and refugee camps, and to run a playwrights’ competition, the winner’s work to be showcased at DYD 2006.

How Palestine Became Israel was a compilation of four pieces: In Our Own Little World and Friday Morning by Carmey, The Water Urn by Issa Abu Srour, and Far Away from a Nearby Village by Abdel Fattah Abu Srour, who won the playwrights competition.

The production opened to a packed house with Ahmad Masoud and the al-Zaytouna Dabke Group but then, somewhat primed for a nostalgic evening of song and dance, we heard a little more than we had bargained for:

"Ladies and Gentlemen, the members of the Al-Zaytouna Dance Group are from Brouj, Majdal, Deir Snaind and Jaffa but they have never been there. They were born and raised in refugee camps in the Gaza Strip. The reason for this is that their country no longer exists. This is what happened.”

With a call to prayer this story begins. So much of this piece takes place in that hour before dawn. In that hour, members of the family from the Palestinian village of Sindyana reflect on their lives and loves – the joys and sorrows of family life whilst at that same hour, on the other side of the stage the Zionist leadership plans and plots to steal the land. Zionists pore over maps of Palestine and, focussing on the Haifa district, they discuss the village of Sindyana – its past, present and its future and they fix on a name more suitable for that future. Sindyana, they discover, means ‘tall oak tree’ which in Hebrew is alon, so why not call the new village Alona?

All this is given hard-edged backing as maps and plans on the one side (we see on the map that ominous transformation of the name Sandyana into Alona) and family snapshots and letters on the other are, by projected images, shared with the audience.

“Don’t talk to me about your father,” writes Maleeha and soon her no-good, lute-playing husband appears played by Palestinian composer and lutist Nizar Issa who, with singer/songwriter Shadia Mansour charts this narrative with music and song woven intricately into the storyline. The songs are a treat: Assmar el Lone (For She is Dark and Comely) Rosana-(a love song), another song of the ubiquitous cactus of Palestine which, even when cut, will always return, the songs Jaffra and Dalouna, and finally the oft-repeated Wain A Ramallah 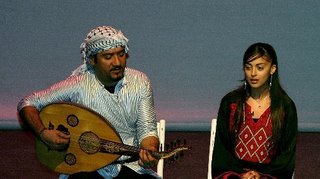 But it is with the entrance of David Ben-Gurion that this production first goes up a notch.

Nor need there be any moral obstacles to the Zionist takeover.

Zionism must and will not impinge upon one degree of legitimate Arab rights.

….We do not recognise absolute ownership of any country. The only right by which a people can claim to possess a land is the right conferred by willingness to work. Palestine is still undeveloped…..Since the Jewish labourer is more intelligent and more diligent than the Arab, then the land is ours.

How convenient, because in this beautifully drawn character of Ben-Gurion we see the whole semi-conscious, self-delusional morality of the entire Zionist enterprise ….and its inevitable moral collapse.

Act one closes and the darkness looms. A young wife bewails her miscarriages whilst Ben-Gurion and his comrades bemoan that, after nearly sixty years of building the Jewish state, the Jews are simply not coming.

The hard truth is that in order to secure the necessary two-thirds Jewish majority they need to lose one million Palestinians, but how?

Don’t be coy. We all know what must be done…We need a few massacres – highly publicised, newspapers with stories of death, rape and burning. As soon as you shoot a few in the village square – that’s how you empty a village.

Perfect. And, best of all, no-one’s morality need be compromised

No-one needs to give the order. When the soldiers are hot enough there is no need to give an order.

So now massacre is the order of the day. Friday Morning, scripted by Razanne was first performed five years ago at Deir Yassin Day 2001. Set in the village of Deir Yassin itself, a father is led outside his home to be shot whilst his wife and child sing Wain A Ramallah to drown out the sounds of his execution.

Shocked, we prepare for the climax: an animated image of the march of ethnic cleansing across the map of Palestine. As the map steadily turns pink, Arab Palestine transforms itself into Jewish Israel, accompanied all the time by flashing pinpoints of light - each of the seventy known massacres making its own special contribution to turning Palestine into Israel. 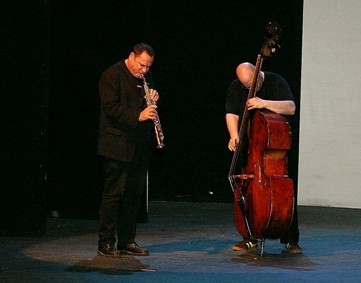 And for a soundtrack, jazz musicians Gilad Atzmon and Yaron Stavi step onstage to improvise an agonised Wain A Ramallah - that happy-clappy song used first at a family party, then to drown out the sounds of an execution and finally now to accompany the Palestinian people in their long journey into exile.

Now all that is left are bedraggled refugees moving across stage recounting their tales of horror on their road to exile. A mother from Beit Natteef has lost her two sons, an old man takes a sprig of fig tree to remind him of the smell of home, and a young woman carries her dead baby girl in her arms insisting she’s still alive:

My daughter cannot die now to be buried on the road of exile. She cannot be put in a grave on a nameless road? How can I come and visit her tomorrow?

And, for the last time, Nizar and Shadia sing. I don’t know any Arabic but even I know what biladi means. I also know what Deir Yassin means and I know that I heard that name in the extra verse added to his composition by Nizar especially for the occasion.

That night I thought back on all that I had seen. One scene kept coming back to me - a dramatization of an incident from the memoirs of Yitzhak Rabin. Some Haganah commanders go to see Ben-Gurion in his office. They’ve captured some villages in the Galilee and they don’t know what to do next. “Prime Minister,” they ask, “What is to be done with these people?" Without a word Ben-Gurion stands and, with a sweep of his hand he gives them their answer and their orders. 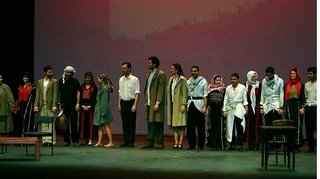 Sitting in that audience and watching Ben-Gurion consign an entire people into exile reminded me of an old Jewish story: A man goes to his rabbi. “Rabbi, how can I believe in the Holy Books? After all, they tell us things like Moses raised his hand and the waters of a mighty sea parted. Who can believe such nonsense?” “Listen,” says the rabbi. “Just one week ago the Czar with his pen signed a decree clearing out the inhabitants of some Jewish villages to make way for a new railway. Perhaps in days to come people will say ‘With one drop of ink, the Russian Czar drowned a thousand villages.’”

So will Palestinians perhaps one day, when telling their children of the Nakba say how, with but a wave of his hand, a Jewish captain drove one million Palestinians from Palestine? Who knows? But one thing is for sure: the Jewish narrative has, for years, been used and abused in the service of Zionism and of Israel. It has long been the role of Deir Yassin Remembered, now joined by Deir Yassin Day, to piece together and tell a truthful and meaningful Palestinian narrative. Deir Yassin Day 2006 and the performance of this remarkable play How Palestine Became Israel did just that.

Paul Eisen is a director of Deir Yassin Remembered