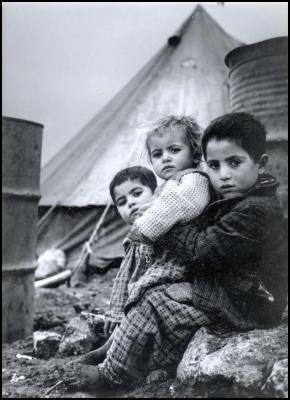 The Other Side of the Story
By Joharah Baker for MIFTAH

It is that time of year again. Oversized Israeli flags fluttering above buildings, homes and cars, firecrackers lighting up the night May sky and Israelis packing up their cars with picnic baskets and beach balls as they kick off the 58th anniversary of Israel’s independence. In a place full of contradictions, double standards and hypocrisy, for many Palestinians, this occasion represents the worst hypocrisy of them all.

On May 14, 1948, Israel declared its independence. Although it is not unprecedented in history that countries gain their independence through war, either by conquest or by flinging off the yoke of colonization, there are few examples in history that match the circumstances under which Israel was created.

The Palestinians, the people at whose expense the Jewish state was established, have another word for Israel’s Independence Day – Al Nakba or The Catastrophe. In a matter of months, over 800,000 Palestinians fled or were expelled from their homes throughout Palestine. Hundreds of others were massacred by Jewish gangs in Deir Yassin and Ein Al Zaytoun as a tactic to terrorize people into fleeing. Villages were destroyed, people killed and homes left behind as horrified Palestinians fled the fighting between Jewish troops, Arab armies and Palestinian resistance groups, believing they would be allowed to return home in a matter of days.

That was not to happen. As Jewish troops continued to launch attacks against both Palestinian resistance groups and unarmed civilian populations, pushing back the much weaker and far less organized Arab armies, more and more people fled the battle scenes, crossing borders in the north into Lebanon and Syria, across the river into Jordan and into the West Bank and Gaza in the south. As the fighting raged on, little did the Palestinians, the Arabs or even the international community realize a deep-rooted problem that would prove to be one of the thorniest issues in the Palestinian-Israeli conflict, was in the making.

Still, even after the war ended and Israel declared its independence, the hundreds of thousands of Palestinians who had left behind their entire lives still believed they would be allowed to return home. Thinking they would only be away from their homes for a few days at most, people took the bare minimum, trudging across the borders with thin mattresses slung over their backs, children on their hips and the keys to their homes securely hanging from their necks.

The journey was to become the Palestinians’ worst nightmare. After months of sleeping in makeshift tents with whatever provisions they could scrap up or were provided them by their unexpecting host countries, the UN General Assembly passed Resolution 194 in December, 1948 which, “declared that in the context of a general peace agreement ‘refugees wishing to return to their homes and live in peace with their neighbors should be permitted to do so’ and that ‘compensation should be paid for the property of those choosing not to return.’”

And as history will later lend evidence to, this was just one of the many hypocrisies perpetrated by the international community and Israel against the Palestinians. Not only was the resolution disregarded by the fledgling Jewish state, it was swept under the rug by the West and the rest of the world. Fifty-eight years later, Palestinians across the board are asking for no more than for UN resolutions to be enforced as they so often are in other areas of conflict.

However, as it became apparent that the refugees would not return to their homes in Palestine, now either destroyed or inhabited by new Jewish immigrants, the world was at least obliged to deal with the disaster that had come into being. On December 8, 1949, UN General Assembly resolution 302 (IV) called for the establishment of UNRWA, the UN Relief and Works Agency for Palestine Refugees. The agency has since provided homes, schools, food and work for the approximately 4.3 million registered Palestinian refugees throughout its areas of operation.
Now, 58 years later, the double standards of Israel – the self-proclaimed democracy of the Middle East – and the world at large have never been so stark. As Israel celebrates its day of independence, the Palestinians continue to languish in sprawling refugee camps in Lebanon, Syria, Jordan, the West Bank and Gaza under extremely poor living conditions and even poorer political horizons. The right of return for Palestinian refugees has been a “national constant” for the Palestinian leadership and people for over half a decade and a most serious sticking point for Israel, which claims it cannot allow the refugees to return to their prior homes for fear that this would sabatoge the demographic composition of its Jewish majority.

In addition to the refugee problem, Israel has little to be proud of when it comes to its neighbors, the Palestinians. Crammed into demeaning cantons, each city severed from the next, fighting off poverty, unemployment and international condemnation for resisting 39 years of Israeli military occupation, the Palestinians are clear proof that Israel is a country based on racism and double standards. As it oppresses, occupies and aims to annihilate the national cause of an entire people, it portrays itself to the world as a democracy and a peace-loving nation under fire.

Even Israelis themselves have truly come to believe this fallacy. On May 3, as Israelis marked the beginning of independence celebrations, Acting Knesset Speaker Shimon Peres said Israeli citizens can look back on their past with satisfaction. Peres was also quick to add the Palestinians into the mix as well.

"I turn, first and foremost, to our neighbors the Palestinians. This evening too we are proffering beautiful days of peace, the squeeze of a handshake of peace rather than a squeezing of the trigger," he said.

After 58 years of displacement, expulsion and oppression, when will the world finally realize that the Palestinians have and continue to be on the receiving end of the gun?

Joharah Baker is a Writer for the Media and Information Programme at the Palestinian Initiative for the Promotion of Global Dialogue and Democracy (MIFTAH). She could be contacted at mip@miftah.org

Bethlehem – The hour was approaching 10:00 at night, and as usual I was updating the Palestine News Network site, with what was the latest news. My child snored quietly in his sleep after a long day playing with the children in the house. At the same time I was keeping my eye on one of the political programs on a satellite channels. This is what I remember.

And in a moment, split seconds, huge explosions began and violent shooting hit near the house. Our home is just meters the expanding Israeli Abu Ghoneim (Har Homa) Settlement and Bethlehem on the other side. Often Bethlehem resistance fighters exchange fire with the settlement. But this time was different because the shooting was thicker, the sound fuller with noisier explosions.

The first thing that flashed through my mind was my child asleep in his bedroom which is in the general direct line of fire when there is an exchange between the Israeli soldiers at the settlement and the Bethlehem area resistance. I ran quickly and seized my small son from his bed, waking him from his free childhood dreams, so that I could put him in a safer place in the house. Usually I chose the kitchen as it is the safest room.

I was thinking that as usual the shooting would stop within moments and life could go back to normal, as with regret I say that this is routine and part of our daily life.

But my thoughts suddenly seemed out of place and I was filled with doubts about what I had become accustomed to because the shooting was increasing with a peculiar sharpness, and the sound of explosions rose in volume. Nothing came to my mind about what was happening outside other than the first night of the war on Iraq when American planes began to rumble through the sky, directing their fire on to what they turned into a battle field.

I felt that I did not possess many choices and that I was not moving quickly enough to decide what to do, considering the time-factor extremely important. I was trying to clear my mind in order to know if I wanted to leave the house and my family, taking a huge risk, in order to see which direction the firing was coming from, still having no idea of the truth of what really was taking place outside.

In my decision-making it came to me alone that I must go outside to the main balcony, directly in the line of fire between Abu Ghoneim’s settlers and Bethlehem. This seemed my only option as to go outside blindly with my entire family was impossible without knowing the exact direction of the shooting.

All of this took place in just a few moments, while the shooting and explosions seemed to be coming from all sides. I began sneaking several meters toward the gate leading to the main balcony, the line of fire, but still sticking to the wall that would soon end and leave me exposed to the line of fire. But at least if I knew, I could make a clear decision.

For a few moments I could see the settlement and what can I describe other than that I found the sky lit up as if it were Doomsday. And then it came to me. I knew what was taking place. And as I stood, still feeling the terror that had seized me, I realized the painful truth that my last moments were in vain. In that moment I did not know whether to laugh at the intensity of my stupidity or to weep from the pain I had felt from what I saw.

But the truth is I could not hold back my tears because I realized then that Israel, through a beautiful display of fireworks in all colors, was lighting the sky. They were celebrating their Independence Day, while I am still living in the Nakba, my Disaster, that I toil to forget, and do often forget. But even if I can and do forget the creation of their state, which is our Nakba, our Disaster for 58 years, they will remind me of it, even in this way.

* The director of the Palestine News Network site.
http://www.amin.org/eng/uncat/2006/may/may4-0.html