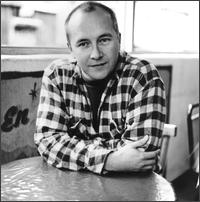 I just found out yesterday that early in May one of the best composers of popular music died suddenly. Grant McLennan was part of a group that I've loved for a quarter of a century, The Go-Betweens. Often, I've read that his song "Cattle and Cane" has been considered to be one ten most beautiful Australian songs. I have no doubt about it, even if I don't know what the other songs in the running were, because Cattle and Cane is simply the most beautiful song ever. All I ever needed to know about rural Australia was there, or about alliteration in poetry, or about how a bassline sings using the same timbre as the voice, or about the unfolding of a melody that stills the heart. I know he will be missed by his many fans and his loved ones. His gorgeous music will live on, never diminishing in its beauty.