Calipari case: for the Roman courts “it is a political crime” 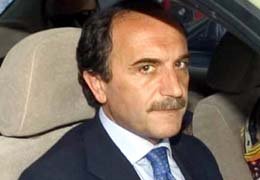 Rome, 19 June 2006
The Death of Nicola Calipari, which took place on the evening of 4 March 2005 while the Secret Service agent of the SISMI (Military Secret Service of Italy) was reaching the Baghdad airport with Giuliana Sgrena who had just that moment been liberated by the Iraqi kidnappers, is an “objectively political act because it had damaged the security of the State.”

The Investigative court of Rome has thus affirmed in their request of placing on trial the American soldier Mario Lozano, accused of voluntary homicide and double attempted homicide, in relation to the wounding of the journalist of il manifesto and of the Major of the military secret service Andrea Carpani, who was driving the car they were travelling in. The death of the intelligence agent of the SISMI, according to the public magistrates Franco Ionta, Pietro Saviotti and Ermilio Amelio and the Public Prosecutor Giovanni Ferrara who have today signed the request to try the accused, “had offended the political interest of the State,” in basis of Article 8 of the Penal Code, for which a trial can be held even in absence of the investigated party on our territory.

Lozano, the soldier at the American checkpoint who had fired at the Italians’ car, has been declared irreparable by the Roman judges, who had to acknowledge the refusal of the United States’ authorities to officially furnish the personal particulars of the investigated party.

Rosa Calipari: I put my trust in the magistracy
“I put my trust, as always, in the Italian magistracy, awaiting with faith and serenity for the developments of the judiciary episode,” Rosa Calipari said, Senator and widow of the Functionary of the SISMI killed in Iraq by “friendly fire.”

Originally published in Italian on: http://www.rainews24.rai.it/Notizia.asp?NewsID=62399 Translated from Italian by Mary Rizzo, member of Tlaxcala (www.tlaxcala.es) the network of translators for linguistic diversity.

More on the Calipari case:
Italian Judges will charge with Volontary Attempted Homicide in Calipari Killing
Widow of Italian Intelligence Agent Killed by GIs Demands Truth about his Killing
Calipari Case: Word was "Beware of the Americans
Sgrena Interview on Democracy Now
Italians refuse to sign conclusion on Calipari killing
US GIs Cleared in Friendly Fire Killing
On the Road to Nowhere: Sgrena's Car on Road Prepared for Negroponte
US bars Italians from examining victim's car
Mysteries surrounding killing of Italian Agent Calipari
Killing your friends: Implications of the Assassination of the Italian 007
Italian 007 shot by US Marines while rescuing hostage