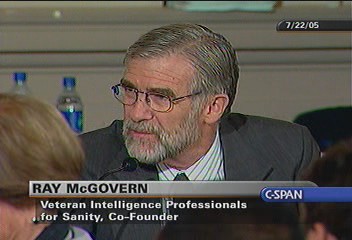 Former CIA analyst and Presidential advisor Ray McGovern, fresh from his heated public confrontation with Donald Rumsfeld, fears that staged terror attacks across Europe and the US are probable in order to justify the Bush administration's plan to launch a military strike against Iran, which he thinks will take place in June or July.

Appearing on The Alex Jones Show, McGovern was asked about the timetable for war in Iran and said that behind the diplomatic smokescreen, the final chess pieces were being moved into position.

"There is already one carrier task force there in the Gulf, two are steaming toward it at the last report I have at least - they will all be there in another week or so."

"The propaganda has been laid, the aircraft carriers are in place, it doesn't take much to fly the bombers out of British and US bases - cruse missiles are at the ready, Israel is egging us on," said McGovern.

McGovern said Iran's likely response to a US air strike would be threefold - mobilizing worldwide terrorist cells that would make Al-Qaeda look like a girls netball team - utilizing its cruise missile arsenal to attack US ships and sending fighters into Iraq to attack US forces.

"The Iranians can easily send three divisions of revolutionary guard troops right over....the long border with Iraq," said McGovern, stating that the local Sunni population of Iraq would welcome such an invasion.

The turmoil caused by such an action would lead the US to tap its so-called 'mini-nuke' arsenal said McGovern, opening a new Pandora's box of chaos.

McGovern highlighted President Bush's all time record low approval ratings as a reason for launching an attack on Iran to again whip up false patriotic fervour.

"I can see Karl Rove saying, 'look what you need to do is become a war president again, get us involved with something pretty big here and then strut around and say you can't vote for a bunch of Democrats to pull the rug out from under me while there's a war going on'."

McGovern drew a comparison with the concillatory cold war stance of Russia and JFK's decision to respond in a similar manner, and the Iranian President's letter which was immediately dismissed by the Bush administration. JFK's approach saved the US from potential nuclear anihalation while Bush's actions put the US in severe danger as Russia and China give ominous mixed signals on what their response to a US strike on Iran will be.

McGovern lambasted Bush's inner circle as uniformly lacking any real military experience and characterized them as a cabal already hell-bent on war.

McGovern entertained the notion that western governments and intelligence hierarchies could potentially stage terror attacks in Europe and the US either before or after an invasion of Iran.

"I would say even probable because they need some proximate cause, some casus belli to justify really unleashing things on Iran....I would put very little past this crew - their record of dissembling and disingenuousness is unparalleled."

McGovern said that Rove, Cheney and Rumsfeld, fearing impeachment and Enron-style criminal proceedings, are urging President Bush to launch a war in order to create a climate unconducive to lengthy investigations and impeachment proceedings.

Asked to cite specifically when we should expect to see an attack launched, McGovern said, "I think we all agree that an attack is likely before the election and we all agree that it has to do largely with the election - as for timing I see a likelihood that it could come as early as late June or early July, most of my colleagues predict August, September, maybe an October surprise even."

"My thinking is that for it to be October that would be so crass and so transparent that even this crowd would shy away from making it so obvious," said McGovern.

McGovern is set to appear along with a host of other respected and credible whistleblowers at the American Scholars Symposium at the end of this month.
Paul Joseph Watson/Prison Planet.com June 1 2006