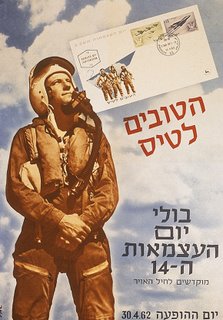 12 Official Guidelines for the Israeli Spokesman in Time of War (at the left: poster boy Lt. Col. Israel Israeli)

*Our army is the most humanist army in the world.

*Our army always informs the helpless victims before we drop tonnes of bombs on their heads.

*Is there any other army in the world that spreads leaflets before it commits genocide?

*As if this isn’t enough, we always ‘deeply regret’ after we’ve committed atrocities.

*Unlike, the Hamas and the Hezbollah, we never kill indiscriminately. We always kill very discriminately. We kill Arabs whether they are Arab women, Arab elders, Arab children, Arab refugees, Arab disabled hiding in a Red Cross shelter in Kafar Quana. We are after Arabs and to speak about us as if we are bombing and killing indiscriminately is an utter anti-Semitic lie.

*Lebanese Prime Minister Siniora must be very happy with our brutal assault against his people. Let’s face it, we are doing his job, we are killing the baddies. We are cleaning his streets. Indeed we start with the Hezbollah, but we will then take the war to Syria and Iran. We have it all planned with our friends in the Pentagon. We can’t really understand why PM Siniora is making such a fuss insisting on ceasefire. Indeed, a third of the Lebanese civilians are now displaced, but as you all know, in war shit happens (especially in the Israeli wars).

*We the Israelis are at the forefront of the fight for democracy and humanism. You European and Westerners should support us. We are engaged in a dirty war you fail to fight. Is it a coincidence that Tony, George and Condy gave us a green light to bring Lebanon back to the Stone Age? Is it a coincidence that the Andrea’le Merkel sent us 3 Submarines as soon as she settled in office? Let’s face it, you all love us, and you better admit it, you love us strong and murderous. You all give us the green light to paint the region in red. And let me tell you, we love painting in red, moreover, we are really good at it.

*And don’t you ever forget, we are the only democracy in the Middle East, when we engage in one war crime or another, when we breach the Geneva Convention, when we violate any possible humanist call, we always express our people’s democratic choice. We always do it in the name of our people. Don’t you forget, this war was launched by an Israeli national unity centrist coalition. This war is the call of the moderate peace-seeking Jewish voice. Unlike the Hezbollah, a tiny group of a paramilitary militias, our terror is nothing but state terrorism in its making. Our state terrorism is our democratic choice and it is supported by the world’s leading democrats: Bush and Blair.

*Unlike the cowards Hamas and Hezbollah who hide behind women and children, we are brave, heroic and technologically superior; we successfully target the women, the elders and the children who may or may not serve the Islamic terrorists as human shields. We smoke them and them alone. We obviously believe in focussed assassination.

*Although we clearly punish the Arabs for the crimes committed against us by the Nazis, we are humanists, we never behave like the Nazis, we never schlep innocent Arabs in trains, we never ship them to death camps, we never gas them, instead, with the support of our American Brother, we bring the death directly to them, we kill them in their homes, in their beds sometime just before dawn when they are still in pyjamas.

*In short, not only we are humanists, we are the notion of humanism. To doubt it is nothing but pure and crude anti-Semitism.

This message must be repeated time after time even if it doesn’t make much sense. It is a message that must be circulated regardless of its truth value. This war is not about truth, it is about the right of the Jewish people to exist in peace.

(1) The document was compiled by IAF reserve Lt. Col. Israel Israeli
It was nicked by Gilad Atzmon