IN GAZA AND BEIRUT, ASYMMETRICAL BARBARITY 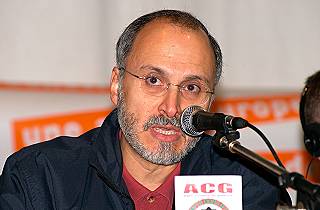 Gilbert Achcar, Lebanese political analyst, is a collaborator of Le Monde Diplomatique and author of Clash of Barbarisms, a razor-sharp pamphlet focusing its analysis on the political situation within his own country and the advance of Islamic fundamentalism.

We met with him in Rome, at the end of a series of meetings concerning his book.

Prof. Achcar, according to the North-American media, it has been Hezbollah’s violence—at the center of an Islamic plot of destabilization of the region—that has brought about the Israeli response. Do you agree?

“The military operation by Hezbollah, as Nasrallah himself has declared, had been staged for some time and discussed with the allies, but also the Israeli military offensive—as the Jewish press has revealed—has been planned long before. It aimed at destroying Lebanon’s infrastructures, that is to say the population’s means of subsistence. It is meant to apply by force UN Resolution 1559 that was pushed through by the UN Security Council in 2004: Syrian troops’ withdrawal from Lebanon, disarmament of the armed groups in the country, i.e., Hezbollah and the Palestinians from the refugees camps.
When Israel asserts it demands the integral enforcement of Resolution 1559, it shows an unconceivable impudence: in fact, Israel has been expected for nearly forty years to apply Resolution 242 which demands its withdrawal within the borders existing before the Six Days War.

US and Israel are driven by the obsession about their major enemies. Formerly it was the Soviet Union, today—in the Middle East—it’s Iran and the alliance supporting it on strong regional foundations: from the Shiites in Iraq to the Syrian regime (secondary, as well as minor evil enemy to Israel, which otherwise would have chaos at its borders), from Hezbollah (tied to the Iranian ideology) to Hamas (Sunni organization), alliance which serves Iran so as to array against US and Israel a whole Islamic front and not only a Shiite alliance.

In order to put the public opinion against Hezbollah and Hamas, the regimes which are most submissive to the Americans, such as the Saudi, the Jordanian and the Egyptian ones, are trying to play the religious card. By exerting pressure over the basis of the Sunni-Shiite antagonism, they argue that Iran would want to involve the Arabs into a war not concerning them.

Neverthless, today Hamas and Hezbollah are the heroes to a public opinion disgusted by the ineffectiveness of the Arab countries. Nasrallah, Hezbollah’s leader, is certainly more popular than Bin Laden, who won credit amongst those who nurtured a more radical animosity against the West but who has alienated most of the public opinion on account of his actions, which are terrorist in the true meaning of the term.”

By the word terrorism, which has nearly become a metaphysical category, one is inclined to define almost all the forms of armed opposition: from resistance to the occupying force, to Bin Laden, even to some forms of radical opposition in the West. Instead, you make use of the concept of asymmetrical barbarity. What does it mean?

“What I mean is that the powerful’s armed actions are terrorism and the victims’ one are barbarities, yet asymmetrical ones. They are different for reasons, responsibilities and consequences and therefore they can’t be put on the same level.

Hamas’ suicide attacks—that now have been broken off—are trifling if compared to the violence of the Israeli oppression: in the last conflict, the number of Palestinian or Lebanese dead is 10 times higher than the Israeli one. And, what’s more, in Lebanon it’s about only verified deaths while who knows how many further ones might be discovered under the ruins of the destroyed buildings. More than the 90% of the victims provoked by Israel isn’t made up of fighters or militants but of civilians. The capture of an Israeli soldier by the Palestinians has led to Gaza’s assault, whilst Israel detains over 10 thousand Palestinian prisoners, most of which is made up of civilians who were kidnapped in the territory Israel has been unlawfully occupying since 1967, infringing international laws. We must not be trapped by the hypocrisy of the western ruling argument.”

By which yardstick are Hamas’ actions against civilians to be judged then?

“In some parts of the world one can’t stand neutral, the priority is to fight occupation and war. And there’s a difference of method between organizations such as that one of Bin Laden and those ones as Hamas and Hezbollah: while the former believes that an armed network, by replacing the mass struggles, can, by resorting to terrorism, force the imperialism to withdraw, the latter are mass organizations which resort to certain armed actions only as an alternative. They have frameworks similar to the great parties and suggest a social organization as substitute of the governmental one.

Their extremist and religious outlook, yet, is substantially similar. Hence, there’s a great difference between this picture and taking reactionary models as revolutionary and allied of the forces striving for the alternative.

From Iraq to Palestine it’s the same tragedy: the total absence of reliable progressive forces and the hegemony over well-deserved popular fights by extremist religious streams which, for instance in Iraq, are carrying out a justified fight against the occupying force, it’s true, but also a far from legitimate war against the Shiites and against that one they call the Iranian occupation, a religious sectarian and reactionary concept.

On the contrary, hundreds of thousands of people, who have marched on the streets many times, have shown that an opposition mass movement can be set up even more effectively than the military one which, by definition, arouses some passivity in the population.”

According to the historian Samir Kassir, killed in 2005, “the Arab unhappiness” lies in the failed achievement of modernity. What do you think about the “Lebanese revolution”, the movement that has brought on Beirut’s major squares a hundred thousand people in the name of the cultural and political pluralism?

“It has been about a contradictory event which has witnessed the rebellion converge against the unbearable behavior of the Syrian army, as well as the anti-Syrian attitude of political and religious factions that ended up with entering the imperialist framework.

To oppose Syria—forgetting that Lebanon is also a piece of the East—a faction of the left has gone around with ultra-reactionary characters, has lost the reference points and stifled the hopes that were aroused at first.

In Lebanon, as in the rest of the region, the leftist and secular ideas have been overwhelmed by the double failure of nationalism on the one hand and of the Soviet Union’s collapse on the other, by the slump of trust in the spirit of Communism and Marxism.

Today, contrarily to what is held by analysts such as Gilles Kepel, the presence of Islamic extremism is the ruling expression of the social and political protest present in nearly the entire Muslim environment. It’s so strong that the room for the development of any other kind of alternative is truly slight.

It’s a part of world where there’s no organized workers’ movement, it having been destroyed by rightist tyrannical governments or oppressed by nationalist dictatorships which have prevented its independent development.

Furthermore, in the fight against progressive nationalism and the Soviet Union, imperialism has availed of the Islamic extremism.

In order that things may change, it’s necessary that these streams—as happened to Arab nationalism in the late 60’s and at the beginning of the 70’s—show their own incapability to face the problems on the ground. But another condition is that a new left project, one that can be trusted by the populations, may emerge.”

Islamic religious extremism, that in its several nuances presents itself as a radical alternative to the oppressed Arab masses, is defined by some as Islamo-Fascism. Do you agree with such a definition?

“My book, Clash of Barbarisms, in French, has a chapter concerning this that is entitled: Neither fascism nor progressivism.

Some fringes of religious extremism bear some characteristics common to Fascism that arose in Europe between the two world wars: the social foundations, mostly made up of lower middle classes, and above all the reactionary character in a real sense, that is to say that will—as Marx argued—to make an end of history. But, apart from this, there are many differences.

In the first part of 20th century, Fascism was a means in capitalistic classes’ hands in anti-worker function while, in most of the countries where the Islamic religious extremism grows, there’s unfortunately no fighting workers’ movement.

Islamic extremism is the distorted expression of the grudge of the populations and masses against foreign imperialist oppression, against the local political despotism and even against their economic situation.

If, nonetheless, we regard Hamas and Hezbollah as fascist organizations, we get to the kind of reaction implemented by Israel or the USA—which, however, should have to explain why they didn’t use the same standard with Pinochet in Chile or why they don’t use it towards Saudi Arabia, a regime more reactionary than the one they would like to attack in Iran--, while it’s about a different phenomenon: the grudge of the population living an unbearable situation of oppression.

On the contrary, rather than bombing and kidnapping the Palestinian or Lebanese population, as the US and Israel are doing, it would be better to uproot the causes of that rancour.”

Do you think that sending UN forces may settle the Lebanese crisis?

“Peace must be negotiated together with all the actors of the conflict, including Hezbollah that demands Israel to release political prisoners and the returning of the last portion of occupied Lebanese territory. To the Lebanese Shiite communities, today Hezbollah is tantamount to what the PLO has been to the Palestinians.

Many observers have stressed that, unlike 1967 when Israel managed to defeat three Arab armies in 6 days, things are going on differently now.

The resistance in Lebanon is supported by the Shiite population, that Israel, in order to overcome, should have to slaughter, and this is the reason why the majority forces within the great coalition that has led the country have always ruled out the use of force. The UN intervention would be useful only if it looked into everyone’s interests, not if it should be NATO’s fig leaf.”

Translated from Italian by Diego Traversa and revised by Mary Rizzo, members of Tlaxcala (www.tlaxcala.es), network of translators for linguistic diversity. It may be freely reproduced, citing the source.