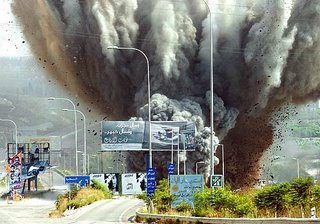 from Redress
23 July 2006
Subject: Military Operations in the North -- Censorship Guidelines Regarding Ground Operations.
1. Following are the main censorship guidelines regarding the continuation of military operations in the north, with emphasis on ground warfare on the northern border.

2. The guidelines in this document are comprehensive and refer to the option of large-scale military activity. The relevant guidelines should also be applied to the current ground operations.

3. Please brief editors, producers, broadcasters, correspondents with emphasis on field correspondents and other network employees on these guidelines in order to avoid any misunderstanding.

5. This document has been sent to local news agencies as well.

6. This document is the follow-up to the former document "The Fighting In The Northern Arena".

The Censorship Guidelines Regarding Ground Operations In The North For Reports And Live Updates.
General
1. This document will detail the main guidelines regarding operations on the northern border by the Censor.

2. This document contains three main topics: general guidelines for news coverage, coverage of activity leading to the ground operation and the coverage of the combat itself.

3. Any news item that is not within these boundaries must be submitted to the Censorship before it is published.

General guidelines
4. Coverage of any kind, that states intent, specific/general abilities and/or any operational activity (in a live broadcast) is not authorized by the Censorship. In principle, analysis based on matters that were approved for publication is allowed.

5. In a case where a news item is not within the boundaries given by the Chief Censor, the issue should be dealt with by the two censorship bases either in Tel Aviv or Jerusalem.

6. There is a special emphasis on matters regarding the activity of special forces and the use of unique kinds of ammunition and weaponry.

7. In principle, news items on the intelligence abilities / lack of abilities during the operation will not be authorized.

The censorship does not approve any verbal information or visual photography that attest to:

9. The type of force, the forces' special abilities and warfare equipment.

12. Information on forces transferring from one area to another (thinning of forces).

14. It is strictly forbidden to mention the time and location in which the army forces might enter the enemy's territory.

15. The codename of the operation will be approved for publication only from the moment it begins.

16. Pictures of the army forces will be approved as long as the location in which they were taken is not disclosed.

The live coverage of the combat itself

17. It is strictly forbidden to show a picture of the full battle coverage, with an emphasis of identifying the location (long shot pictures).

18. It is strictly forbidden to mention military targets while these targets are being pursued.

19. It is strictly forbidden, until the information is cleared by the censorship, to publish information concerning missing personnel and captives (from both sides).

20. Coverage of aerial accidents in Israeli territory can only be approved by the censor. In hostile territory, this information will not be approved until the evacuation of the staff and equipment from that area is completed.

21. It is strictly forbidden to conduct real time coverage on visits of officials. Interviews and photography will be approved later, after the end of the visit.

22. During an incident ­ authorization for coverage of the reasons for the incident will be given as long as there is no breach of Israeli security concerns (thus personal opinions and analyses for the reasons of the incident are allowed).

23. Coverage of an incident with casualties ­ as always, must be submitted to the censorship.