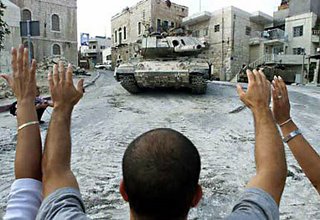 I am still here in Palestine and feel lucky as I could not imagine being anywhere else at these challenging times. I hope you will understand the delay in writing under the circumstances. Since I wrote to you nearly 10 days ago, we met and talked with hundreds of people and held several workshops and conferences on the unfolding colonial onslaught (in addition to the tours of the ongoing devastation and destruction of lands and homes).

It has been very, very busy and very very emotionally and physically challenging. Yet, we saw and see daily many, many hopeful signs and continue to "strive to have joyful participation in the sorrows of this world" (my favorite Buddhist saying).

Tina, the Palestinian American woman beaten this week with her 17 year old son by an Israeli soldier on the border had a compelling story to tell us (see the images and read the details at http://www.thecornerreport.com/index.php?=638&more=1&amp;amp;amp;amp;c=1&tb=1&pb=1#more638

As we listened to Tina's story in Beit Sahour, in my mind flashed other images:

- the US made weapon that was used to shoot 19 year old Musa (Moses), nephew of my friend and international law expert Dr. Abueid, in his house by an Israeli sniper. The Abueid family is a highly respected Christian family whose son was guilty of only being a Palestinian in the land of his ancestors coveted by those who have learned nothing from history. The younger son Issa (Jesus) escaped. What an irony for a Jewish soldier to kill Moses and leave Issa. Yet, teh father said modestly that the women who was shot in the head that same night in the same neighborhood was a bigger tragedy: her relatives found her nursing 7 month baby suckling the blood dripping from his mother's corpse.

- The stack of Palestinian green ID Cards held in the vest (which had the color of an unmentionable substance) of the Israeli soldier who detained a member of our group in Hebron a week ago. Such daily interactions teach us values of overcoming fear and teamwork under tough circumstances. We wondered if the show of force here and at checkpoints between Palestinian areas (that are clearly not for security) lull these land thieves into thinking that power compensates for lack of justice?

- The young mother with her four year old son sitting in the Nablus Cemetery in front of her martyred husband among the rows of dozens of Palestinians killed (some of relatives, brothers, cousins, uncles and nephews, mothers and sons). Nablus is under siege with almost nightly invasions by Israeli occupation forces (the night we were there, there was also a home demolition in the center of the city).

- The order “putting hands” on the 100 acres of olive and almond trees in the illage of Aljaroshiya (Tulkarem district). The order came from the “Custodian of Absentee property” (the agency charged with cleansing and owning Palestinian properties) which is interesting since the text claims “security reasons” (unspecified). In reality, the wall was shifted and twisted to include this rich land that used to export 12 tons of olive oil and hundreds of kilos of almonds (clearly a land theft with not a single shred of security issues involved). Before they showed us the orders, the family showed us the land which is now separated from their house by the network of electrified fences. The old man had lamented once that it is worse than the death of a child because a child is buried but the land is dying every day in front of his eyes behind this monstrous fence.

The above are some of the many places we visited and stories from surviving victims told to us.

In Gaza and in Lebanon, the stories are even more horrific. In Gaza for example a professor, his wife and seven children were massacred this week (see Family of nine killed as they slept. The Guardian 13 July 2006 http://www.guardian.co.uk/israel/Story/0,,1819128,00.html
The claimed target, a Hamas resistance leader in the same building, suffered injuries but was spared. But it is not just the killing of civilians that is horrific, the targeting of electric power stations (which cut off ability to pump water also) has caused a humanitarian catastrophe beyond comprehension (see Life in Rafah with photos at http://rafah.virtualactivism.net/news/06/june_06_reports.htm and MONA EL-FARRA's My life in Gaza

Israeli state terrorism extended to Lebanon where dozens of Lebanese civilians were killed and significant civilian infrastructure (bridges, airport, apartment buildings) was destroyed since two Israeli occupation soldiers were captured. (Israel holds many Lebanese captive for years and refuses to release them).

Words are so limited in any language to describe the experiences of racism and brutality that Tina went through or the many other cases we witnessed over the past few days. But we also saw dozens of heroic daily acts of resistance and incredible generocity and spirit. In fact, every Palestinian we saw is an act of resistance by his or her presence in the land of their ancestors despite the atrocious efforts of the Israeli state to uproot them. They continue to live despite all odds and despite the daily war crimes and crimes against humanity they suffer. Thursday, tens of thousands of students celebrated their success in passing the general certificate exam (Tawjihi)/end of their highschool. They will have to figure out how to get to colleges (the occupation forces have infringed significantly on the right to educational and religious access since since most cities are isolated from each other). Yet, somehow, they think they will make it... Inshallah.

We in the International community do need to address the lack of protections for Palestinian civilians. Even American citizens of Palestinian origin in the occupied territories like Tina lack protection. Other recent violation of basic human rights involve denial of “residency rights” to US Passport holders (even those born in the West Bank) married to Palestinians with “residency rights”. The quotes here are appropriate since the decisions about who gets these rights and who does not is an Israeli decision based on Zionist racism (maximum geography with minimum demography of the natives) and is a practice contrary to International law and basic rights of native people. Thousands of Palestinian families are effected by this policy, some forced to live separately and most live in the shadow of being deported from their own homes and lands. There are estimates of some 60-70,000 people living here who cannot even get out of their town lest being confronted with an Israeli soldier who would find out they do not have proper documents to live in their own lands. But then again, many Palestinians with proper IDs can’t leave their own cities. These are cities under siege for the past several years.

It is hard to describe my feelings after so many meetings and events. There is indeed a sharp contrast between the dignified Palestinian resilience (even when we have reached near bottom- 2/3rds of us are refugees and displaced people) and the brutal occupation and increased moral debasement, lies, distortions by the self proclaimed Jewish state. Zionists seem to steal and lie, steal and lie repeatedly with hardly an outrage among countries (only among citizens). Many Palestinains asked us why is the return of one occupation army soldier demanded but not the release/return of the more than the 10,000 Palestinians kidnapped and jailed by the Israeli colonial state power? Till when is this double standard tolerated by the weak spines in Europe and the collaborating regimes in the Arab world? When will the governments in the US, Canada and Europe start to pay attention to interests of their own people instead of the Zionist elites? When will elites and misinformed people realize that the Palestinians are and have been robbed for 60 years of their lands and that that is the core of the problems and instability? No people will ever except to be ethnically cleansed on a daily basis and not resist. Peace is after all only possible with justice. Locally, people will resist.. internationally we must protest AND apply BDS (boycotts, divestment, sanctions) until Israel complies with human rights and international law.

There are a number of planned demonstrations against the brutality of the Israeli onslaught on Lebanese and Palestinian civilians:

In other activism developments and action alerts:

- The Electronic Intifada has launched http://electronicLebanon.net to provide a central location for EI's coverage of the ongoing Israeli blockade and assault on Lebanon. Stay tuned to the site for eyewitness accounts, commentary and podcasts on the latest events

- In order to balance American news media coverage of the conflict in the Middle East, Imagine-Life will be airing several hundred more television spots in the coming week. The unique ground breaking television public service announcements educate Americans on the ramifications of the Israeli occupation, the deteriorating human rights conditions and the roots of the current conflict in the Middle East. To donate: http://www.imagine-life.org/donate.html