Oren Ben-Dor: Who are the real terrorists in the Middle East? 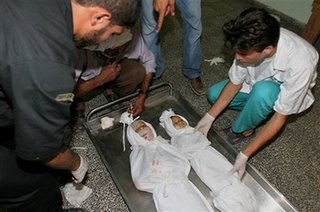 What exactly is being defended? Is it the citizens of Israel or the nature of the Israeli state?
Published: 26 July 2006 Independent UK
As its citizens are being killed, Israel is, yet again, inflicting death and destruction on Lebanon. It tries to portray this horror as necessary for its self-defence. Indeed, the casual observer might regard the rocket attacks on Israeli cities such as Haifa and my own home town, Nahariya, as justifying this claim.

While states should defend their citizens, states which fail this duty should be questioned and, if necessary, reconfigured. Israel is a state which, instead of defending its citizens, puts all of them, Jews as well as non-Jews, in danger.

What exactly is being defended by the violence in Gaza and Lebanon? Is it the citizens of Israel or the nature of the Israeli state? I suggest the latter. Israel's statehood is based on an unjust ideology which causes indignity and suffering for those who are classified as non-Jewish by either a religious or ethnic test. To hide this primordial immorality, Israel fosters an image of victimhood. Provoking violence, consciously or unconsciously, against which one must defend oneself is a key feature of the victim-mentality. By perpetuating such a tragic cycle, Israel is a terrorist state like no other.

Many who wish to hide the immorality of the Israeli state do so by restricting attention to the horrors of the post-1967 occupation and talking about a two-state solution, since endorsing a Palestinian state implicitly endorses the ideology behind a Jewish one.

The very creation of Israel required an act of terror. In 1948, most of the non-Jewish indigenous people were ethnically cleansed from the part of Palestine which became Israel. This action was carefully planned. Without it, no state with a Jewish majority and character would have been possible. Since 1948, the "Israeli Arabs", those Palestinians who avoided expulsion, have suffered continuous discrimination. Indeed, many have been internally displaced, ostensibly for "security reasons", but really to acquire their lands for Jews.

Surely Holocaust memory and Jewish longing for Eretz Israel would not be sufficient to justify ethnic cleansing and ethnocracy? To avoid the destabilisation that would result from ethical inquiry, the Israeli state must hide the core problem, by nourishing a victim mentality among Israeli Jews.

To sustain that mentality and to preserve an impression of victimhood among outsiders, Israel must breed conditions for violence. Whenever prospects of violence against it subside, Israel must do its utmost to regenerate them: the myth that it is a peace-seeking victim which has "no partner for peace" is a key panel in the screen with which Israel hides its primordial and continuing immorality.

Israel's successful campaign to silence criticism of its initial and continuing dispossession of the indigenous Palestinians leaves the latter no option but to resort to violent resistance. In the wake of electing Hamas - the only party which, in the eyes of Palestinians, has not yet given up their cause - the Palestinian population of Gaza and the West Bank were subjected to an Israeli campaign of starvation, humiliation and violence.

The insincere "withdrawal" from Gaza, and the subsequent blockade, ensured a chronicle of violence which, so far, includes Palestinian firing of Kasem rockets, the capture of an Israeli soldier and the Israeli near re-occupation of Gaza. What we witness is more hatred, more violence from Palestinians, more humiliation and collective punishments from Israelis - all useful reinforcement for the Israeli victim mentality and for the sacred cow status of Israeli statehood.

The truth is that there never could have been a partition of Palestine by ethically acceptable means. Israel was created through terror and it needs terror to cover-up its core immorality. Whenever there is a glimmer of stability, the state orders a targeted assassination, such as that in Sidon which preceded the current Lebanon crisis, knowing well that this brings not security but more violence. Israel's unilateralism and the cycle of violence nourish one another.

Amidst the violence and despite the conventional discourse which hides the root of this violence, actuality calls upon us to think. The more we silence its voice, the more violently actuality is sure to speak.

In Hebrew, the word elem (a stunned silence resulting from oppression or shock) is etymologically linked to the word almut (violence). Silence about the immoral core of Israeli statehood makes us all complicit in breeding the terrorism that threatens a catastrophe which could tear the world apart.
okbendor@yahoo.com