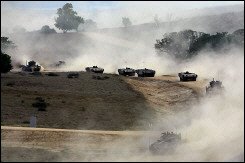 Palestinian moderates are Israel's real enemies, so it deliberately drives them from the scene
Patrick Seale
Monday July 3, 2006

Guardian
By using vastly disproportionate force against Gaza, Israel has once again demonstrated its contempt for international law and its indifference to human suffering. America's blind support may give Israel immunity in the short term, but the longer-term consequences of such irresponsible behaviour can only be dire.

Arab and Muslim loathing for the Jewish state - and its US ally - will inevitably be cranked up with everything this implies for the security of Israelis and Americans everywhere. There will always be Palestinians and others who will seek revenge, in one form or another, including a resort to terrorism.

Political pressures on Israel to end its occupation of Palestinian territories, even from the spineless Europeans, will steadily increase. Alarmed at US inaction, Britain and France are already working quietly on a project to define their own parameters for resolving the conflict. They will not endorse the unilateral annexations Israel's prime minister, Ehud Olmert, has in mind.

When he travels abroad, Israel's chief of staff, Dan Halutz, may find that he has joined the list of Israeli generals wanted for war crimes.

Why have Olmert and Amir Peretz, his hapless defence minister, gone down this road to nowhere? Some observers have suggested that they may want to show that they are as good at killing Arabs as their predecessors because, unlike previous Israeli leaders, they lack any significant military experience. But this can be only part of the story.

It would seem that there are two broad reasons for Israel's destructive rampage in Gaza. Neither reason has much to do with the young Franco-Israeli corporal, Gilad Shalit, captured during a cross-border operation by Palestinian guerrillas against an Israeli military post.

One reason for Israel's assault is military. Israel has been desperate to put an end to the homemade rockets launched from northern Gaza at the Israeli town of Sderot, which lies a kilometre from the Gaza strip in the north-west Negev desert. Sderot is Peretz's home town.

These rockets have so far not killed anyone but they are a very considerable irritant. The city's municipality is up in arms at the state's inability to offer adequate protection. In response to the rockets, Israeli shelling and air strikes have in recent months killed some 50 Palestinians, including several children, and wounded more than 200.

But beyond the rockets themselves is the wider issue of Israel's deterrent capability. Nothing inflames Israel more than any dent in this capability. This past week the US has, as usual, repeated its mantra that "Israel has the right to defend itself". The implicit corollary is that no one else has such a right.

Israel's second reason for striking at Gaza is political. It is seeking to destroy the Hamas government by all possible means - including physical liquidation - because it knows that Hamas's terms for a settlement would be stiffer than it could possibly accept.

It abhors the recent Hamas-Fatah accord, which implicitly recognises Israel, because it threatens to produce a Palestinian partner ready to negotiate the creation of a Palestinian state within the 1967 borders. Israel has no intention of ever returning to those borders. It is no accident that its assault followed immediately on the Palestinian accord.

Israel will do everything to avoid a negotiation. Hence, it deliberately inflicts inhumane hardships on the Palestinians in order to radicalise them and drive the moderates from the scene. Moderates, who are prepared to talk, are Israel's real enemies.

· © 2006 Patrick Seale
Patrick Seale is the author of Asad of Syria: The Struggle for the Middle East and Abu Nidal: A Gun for Hire. comment@guardian.co.uk