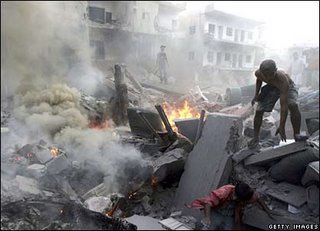 To: Arab League
Insofar as internationally, we Arabs have allowed many organs to represent us, we Arabs and friends of Arab peoples, address you as our representatives. I trust that you hold our interests and our wellbeing in the highest regard, and that is why we take this opportunity to call upon you to act as our true representatives to the world, and insist that all Heads of State in the Arab League, and that all representatives of the International Community that have economic, social and political ties with any of our nations, demand an immediate stop of Israel's belligerent aggression against our brothers and sisters in Palestine and Lebanon.

It is impellent that you take immediate action, to validate the trust that citizens have placed in you, as well as for pragmatic reasons of your own survival as a body that can claim to represent people of Arab nations. There are many ways to diplomatically impose a halt of Israel's violence. There are many peaceful actions that can impose upon it a determined change in policy. All of these tools are able to be implemented in full compliance with international law, and as in the situation of South Africa, have been proven to be effective and furthermore, have gained widespread international support both within the masses and at the level of governments of civilised nations.

In choosing to not take advantage of any of these instruments, you have allowed the onus of the defence of our people to fall on the Hamas and the Hezbollah. Whether or not this has been your intention, the fact remains that you are an internationally recognised representative of the States and therefore of the citizens and residents of the Arab nations, and you are theoretically ultimately responsible for the coordination of their political approaches to situations of international crisis that involve them, especially where the lives of our people are being sacrificed. If you have chosen to abandon the Arab people at this time, it is clear that you serve no purpose whatsoever, and in that case, it would be wise to withdraw from the international scene and disassemble yourselves.

We implore you to act now, or forever disband. Israel must not be allowed to commit any more War Crimes against Arabs, or the UN for that matter. Violence against Arabs must cease and desist. It is your responsibility.
Sincerely,
The Undersigned