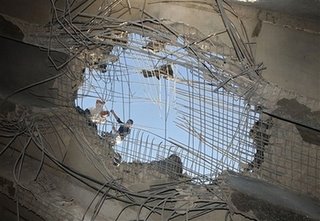 Israel is determined to stoke the embers of tension that are simmering right on the surface in the area. The Israelis have taken out three runways at Lebanon’s International Airport – twice, the second time to re-bomb one of the runways the Lebanese had patched up. They have gone on to bomb several bridges, and several Shiite populated areas labeling them “Hezbollah strongholds”. It has bombed several key points of entry and exit to and from Lebanon, including the main artery to Syria. And it has wreaked havoc on certain residential areas via fighter plane bombs and from its gun-ships. The booms and the ensuing clouds of smoke, reminiscent of the dark days of war, carry with them the promise of escalation. Well over 50 innocent civilians have died with countless others injured, and, it seems, there is more to come.

It is anyone’s guess what exactly happened on or around the “Blue Line” a few days back. Those who want to believe Israel, will and those who want to believe Hezbollah, will. But the outcome remains the same – Lebanon will likely suffer the graver consequences of the two countries – both in the loss of innocent lives and the incurring of a financial burden that it may never come out from under if this situation is not resolved immediately. Israel took a situation and made if far worse than it needed to be. For two soldiers, Israel is pounding the heart of Lebanon back to dark days of its uncivil, civil war.

We know that Israel does not need to place one of its soldiers on Lebanese soil to make life in Lebanon a living hell. It has enough fire power, air and sea, to stifle and partially bury Lebanon under its own weight. Our power plants and airport are a start. Israel can and will take them both out – as it has done in the past and as it did to two of our key runways at our newly built airport in our pathetic attempt to resuscitate our tourism industry again. This time, it took out the fuel containers. Even if we have power, we may not have the fuel for too much longer.

This whole situation begs the following question - Can this military action by Hezbollah, the keeping of the two Israeli soldiers in the hope for a swap for six Lebanese fighters, along with the close to 10,000 Palestinians unjustly held in Israel, be worthwhile if we are about to lose the lives of what could ultimately be several hundred innocent civilians?

Hezbollah long ago stopped recoiling in fear from the big, bully on the regional block - Israel. It is us mere mortals – those of us who would rather leave Israel alone and hope it will do the same – who shake in our sandals at the thought of Israel barreling ruthlessly across our sky and dropping bombs where we cower. It is us whose throat dries and who hyperventilate at the slightest roar from above. It is us mere mortals who plead for peace – even if what we have, in times of “peace” is not an ideal kind of peace. Maybe what we are settling for is just a lack of war, because even in our so-called “peace”, we live in a state of un-peacefulness.

Israel is above the law and, to date has never been held accountable for its long list of atrocities. Israel is also the master of spin control. It can invade, bomb a country back to the dark ages, kill thousands and still come out looking like the victim. We, in the Arab world, have still to master the art of uniting long enough to tell our story, let alone spin it in our favor. We are like the elephant in the china closet.

We see what Israel is doing in Gaza. After Palestinian fighters took one Israeli soldier, a Corporal Gilad Shalit, Israel went on a tirade. In utter disregard for International law, several Israeli jet planes went on to buzz Syrian air space, not only just over the border as it commonly does, but right over President Bashar Assad’s residence. It then went on to arrest 60 Hamas leaders, many of them Palestinian Authority Ministers and elected members of the Palestinian parliament. It has since destroyed the only power plant that provides half of Gaza’s 1.4 million people with power and running water. It is wreaking havoc on entire residential areas within Gaza, bombing key bridges, damaging water pipes and water receptacles and forcing close to one thousand people to flee their homes. And to add insult to injury, people are seriously sleep deprived due to the frequent, earsplitting, panic-inducing, sonic booms that, U.S.-made, Israeli manned F-16 planes emit as they streak over their skies.

In sum, Palestinians are holding one Israeli soldier captive while Israel holds close to 10,000 Palestinian prisoners, many civilians held without due process, and some enduring torture and Israel has carte blanche to do what it has done, and continues to do to the Palestinians. This mockery of justice is not lost on Palestinians, and it is not lost on Hezbollah.

Now it is Lebanon’s turn. Just as Lebanon’s tourist season appeared to be picking up again, perhaps for the first time since Lebanon’s ex-Prime-Minister Rafik Hariri was murdered in 2005, Israel snuffed out our hopes - again.

Either we, in Lebanon, can continue to act as a thorn in Israel’s oppressive boot, every so often suffering the consequences of our actions, or we can try to focus on resuscitating Lebanon and our place on the world’s stage. The latter seems to spare more innocent lives but we exist in an uneasy state of calm. The former breaks the stalemate, but at what cost? We are no match for Israel, the world’s Sacred Cow. It is above the law; its actions always just off the morality radar. And when the morality radar does find it, there is always Israel’s big brother, the United States, to come to its immoral defense in the United Nations.

This issue in Lebanon must be resolved before the undertow sucks us all in, including the participant observers in suits and ties who pontificate about Israel’s “right to defend herself” while they fuel the arrogance and power of Israel, the key perpetrator of violence and injustice in the region.

In the interim, it appears that Lebanon and Palestine are destined to exist in a perpetual state of purgatory limbo as Israel continues to flex and test its muscles on our soil.

Rana El-Khatib is a Palestinian/Lebanese writer living in Beirut. Her email is: brandedpoetry@yahoo.com