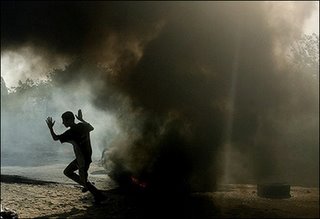 TAKE ACTION: Hold Israel to account for its killing of civilians and destruction of civilian infrastructure in the Gaza Strip. Contact the White House and your Members of Congress to demand that Israel is held accountable for its violations of the U.S. Arms Export Control Act and Foreign Assistance Act and urge that military aid to Israel be cut off as required by law. Click
here to send an email.

BACKGROUND: Israel is using weapons supplied by the United States to target Palestinian civilians and civilian infrastructure in the Gaza Strip in violation of the U.S. Arms Export Control Act, the Foreign Assistance Act and the Geneva Conventions.

In addition, by using U.S.-supplied weapons to commit these atrocities, Israel is violating the terms of the U.S. Arms Export Control Act and Foreign Assistance Act. The Arms Export Control Act restricts the use of U.S. weapons to legitimate self-defense and internal policing; U.S. weapons cannot be used to attack civilians in offensive operations. The Foreign Assistance Act prohibits U.S. aid of any kind to a country with a pattern of gross human rights violations.

*On June 9th, Israel shelled a beach in Beit Lahiya killing 8 civilians and injuring 32. At the site of the killing, Human Rights Watch found evidence of a 155mm artillery shell consistent with those fired from an Israeli M-109 Self-Propelled Artillery. Between 2000-2005, the United States licensed to Israel $69,163 worth of M-109 spare parts and 155mm artillery shells. (*)

* On June 13th, Israeli aircraft fired missiles at a van in an extrajudicial killing of two Palestinians in Gaza City. A second barrage of missiles fired shortly afterward killed nine Palestinian bystanders.* On June 20th, Israeli aircraft fired at least one missile at a car in an extrajudicial killing attempt on a road between Jabalya and Gaza City. The missile missed its intended target and killed three Palestinian children and wounded 15.

* On June 27th, Israel launched a massive invasion of the Gaza Strip. Israeli aircraft fired missiles targeting civilian infrastructure. In illegal acts of collective punishment, Israel demolished three key bridges, the Gaza Strip's only electricity generation plant, the five-story Interior Ministry building in Gaza City and part of a university and a school, thereby endangering Palestinian human rights to food, water, health, electricity, education, and freedom of movement. Israeli Prime Minister Ehud Olmert admitted that the purpose of these measures is to "apply pressure" to the civilian population of the Gaza Strip.

* On June 29th, Israel arrested and detained 64 Palestinian Authority cabinet ministers and members of the Palestinian Legislative Council. Prime Minister Ehud Olmert reportedly said in a closed meeting, "They want prisoners released? We'll release these detainees in exchange for Shalit." The arrested Hamas government officials were democratically elected to govern the Palestinian territories in January, and their arrest and targetting can be considered a reprisal against civilians, which is forbidden under the Geneva Conventions.

(*) Statistics for U.S. weapons licensed to Israel are compiled from the State Department's annual report to Congress pursuant to Sec. 655 of the Foreign Assistance Act.

FURTHER ACTION:1. Write a letter to the editor or op-ed for your local newspaper and call your local talk radio stations to protest Israel's atrocities in the Gaza Strip and highlight U.S. support for these actions. For contact information for your local media, click here: http://www.democracyinaction.org/dia/track.jsp?key=150054434&url_num=4&url=http://www.congress.org/congressorg/dbq/media/

"Washington Wednesday" action alerts are initiated by the U.S. Campaign to End the Israeli Occupation and its member organizations, including the Council for the National Interest, the first Wednesday of each month.