Vera Pegna – In the Israeli project, peace is the danger 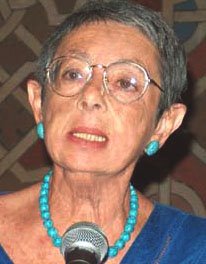 Vera Pegna is an authentic cosmopolitan. Born into a Jewish family of antique Spanish origins that found refuge from the persecutions at Livorno, Italy, they moved in the 1800s to Alexandria in Egypt, she does not present herself as a “pacifist Jew”. And this is quite good, since her family has been secular for several generations, and her identity is both Mediterranean and universal.

Too often, the term “pacifist Jew” refers to persons who believe in “Israel’s security” as a supreme good that is beyond discussion and that will best be obtained by avoiding excessive violence towards the Palestinians and the other nearby peoples. And far too often, the “pacifist Jew” is invoked by a Left that is terrorised of being accused of “anti-Semitism”: the “pacifist Jew”, who the Left selects to hail purely for ethnic reasons, is given an aura that is not always deserved, therefore becomes the stopgap used to resolve a problem that could better be faced simply with a healthy laugh.
In this article, far from the usual “nice guy” writings on the “Israeli-Palestinian conflict”, that always avoid delving deeply into the argument, Vera Pegna goes to the root of the Zionist question. It is a text that should be read with great attention.
Miguel MartinezIn 1968 an Israeli writer, Marc Hillel*, wrote that peace represents a danger for Israel. Worried about the future of his country, Hillel asked whether or not an Israel in peace didn’t run the risk of seeing the enthusiasm and the economic aid from the European and American Jewish communities come to an abrupt halt, since every new war and every victory celebration were reason enough for the organisation of charity funds, in spite of the diminishing flow of immigrants that would be indispensable for its survival.

Few will remember the origins of the Zionist project of Greater Israel that with the antique Zionist aspiration of cultivating in Palestine a religious centre of prayer that shares with it only the name. It was in the anti-Semitic Europe of the ghettos, of the pogroms and of the Dreyfus Affair that the Zionist leaders, convinced that the Jews were destined to always be persecuted, launched an entirely political project of Greater Israel. The slogan that they chose was “A land without people for a people without land.”

That Palestine, then under British mandate, was populated by Palestinians was a well-known fact. Yet, that the world’s Jews formed a single people was something that had not been heard of since the days of the Old Testament. But in the Europe of the Nation States and of colonialism, having a State meant that there had to be a people for it, and in the Eurocentric logic (as alive today as it was then) to make the persecuted Jews of Europe into a single people together with those of Yemen, Baghdad, Cairo or New York caused only a slight amount of perplexity.

It instead had some heavy repercussions on the Jewish communities of the Arab nations, having found themselves to be a people, therefore linked to a common destiny, with people of different cultures, who spoke a different language and who had in their history a story of suffering and persecution.

People who, like my grandfather used to say, “walked with their backs against the walls.” Just how catastrophic for the Arab Jews the arrival in Israel was is indicated well in these verses sung by the Iraqis who were made to immigrate in Israel whether they wanted to or not: “What a shame. What a shame it was that they put us on the plane. If we had left with the mule, we would still not have arrived.”

In its fundamental Law, Israel has written that it is the State of the Jews of the entire world and it then established the “Law of Return”. That means that there are then fifteen million people who, luckily for everyone, haven’t got the slightest desire to transfer themselves in Israel. In place of them, though, Israel has opened its doors to Russian, Polish or Romanian immigrants who are not Jews – but are still white Europeans – whose immigration to Israel contributes to the completion of the Zionist project. And this is despite the Rabbinical approval, which is an official requisite in order to obtain Israeli citizenship, according to which a Jew is he whose mother is Jewish. What better requisite could there be for a Democratic State? And don’t dare go saying that Israel isn’t one. You better look out if you even imply that this criterion was the same that was used by the Nazis to send the poor devils in the concentration camps and in the ovens.

The Palestinians have been asked to change their constitution and to officially renounce their aspirations over all of Palestine. They did just that. Why not ask the Israelis to change their fundamental law and renounce being a State of all the world’s Jews? The Palestinians are asked to recognise the State of Israel, but what State, with what borders? Including the wall? The Palestinians know that this would mean accepting by rote the confines of their future State that extends on less than 20% of pre-Mandate Palestine and they know that they would forever lose the possibility to have Jerusalem – or even part of it – as their capital. I remember that in 1947 the UN General Assembly had attributed 45% of Palestine to the Palestinians and had foreseen for Jerusalem the status of International City.

When Hillel wrote his book, the project of Greater Israel was in full development. Since then, 38 years have gone by, more than a generation, and on the Zionist project, a veil of silence has dropped. No Israeli party or political leader has ever dissociated himself from it, except the very small Communist Party. Therefore, either one or the other; that the Israeli political leaders and their parties declare that the Zionist project has been officially concluded with the State of Israel within the borders of 1967 or they have to take into account with anguish that the project is still underway.

Therefore, it is legitimate to ask oneself if all of these failed attempts to reach a peace agreement as well as the facts on the ground (continuous construction of new settlements and new roads that divide the Palestinian territory, discrimination and increased hardships of the Palestinians of Israeli citizenship) are really functional and premeditated. Even the kidnapping by the Israelis of 64 parliament members of Hamas and the bombing of Gaza took place at the very moment that authoritative leaders of Hamas and al Fatah who are imprisoned in Israeli jails had declared that they would recognise the legitimacy of the existence of two States.

And still: several days later, in response to the launching of missiles and the capture of two Israeli soldiers by Hezbollah, the Israeli army has razed to the ground the civil infrastructures of southern Lebanon, part of Beirut, the airport and the electrical plants. In total contempt for the civilian lives, given that a future of peace does not interest them, just as peace with the Palestinians is of no interest to them. Lebanon isn’t part of the confines of the Zionist project, this much is true, but the disproportionate use of weapons enters into the concept that peace for Israel is a dangerous concept because the weapons industry that produces both for its own use as well as for an exportation market, gives work directly or indirectly to a large proportion of the active population of this country.

I believe that we can put forward a debate that presents the primary causes of the conflict. At least, let us talk about it. Let’s talk of the occupation, let’s talk of the Zionist project and of the objective difficulties that the State of Israel would have in converting its successful bellicose industry into a peace industry. Let’s talk about it, if we want to make the perspectives of peace in the Middle East more than an illusion.

Originally published in Italian on: http://kelebek.splinder.com/post/8805381

Translated from Italian by Mary Rizzo and revised by xxxxxxxxxx, members of Tlaxcala (www.tlaxcala.es), network of translators for linguistic diversity. This translation is on Copyleft and may be freely reproduced citing the source.