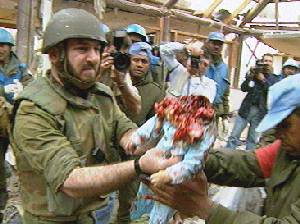 thanks Eldad and Dorothy) ISRAEL/LEBANON Civilians in Israel and Lebanon

On 14 August, a ceasefire between Israel and Hizbullah, called for in UN Security Council resolution 1701, came into effect. Between the outbreak of the conflict on 12 July and the ceasefire coming info force, some 1,000 civilians are reported to have been killed in Israeli air strikes and heavy artillery shelling in Lebanon and some 40 civilians by Hizbullah rocket attacks in northern Israel.

Indiscriminate and disproportionate attacks against civilians continued unabated on both sides up until the ceasefire, including Israeli bombardments of civilian infrastructure throughout Lebanon. On the evening of 11 August, a convoy of vehicles travelling in the south of the Beka'a valley, in eastern Lebanon, was bombed by Israeli forces killing at least six civilians including a Lebanese Red Cross volunteer and injuring 32 people. The convoy, which according to the International Committee for the Red Cross (ICRC), included hundreds of people, was leaving the area of Marjayoun, southern Lebanon, which had come under repeated Israeli attacks. It had earlier been accompanied for part of the journey by United Nations Interim Forces in Lebanon (UNIFIL) troops. The Israeli authorities stated that the attack was a mistake, and claimed that it had been carried out on suspicion that the convoy included Hizbullah fighters transporting arms.

In the early afternoon of 10 August, Israeli planes dropped leaflets in the centre of Beirut, warning the inhabitants of the capital's neighbourhoods of Hay Sallum, Bourj al-Barajneh and Shyah to leave the areas as these may be attacked by Israeli forces. One of the neighbourhoods mentioned in the leaflets, Shyah, had already been bombarded by Israeli forces three days earlier, on 7 August, killing more than 50 civilians. Amnesty International delegates in Lebanon who visited the area the day after the bombardment found a scene of utter devastation, as bodies of women and children were still being pulled from under the rubble. The recovery task continued into the third day. Israeli forces had not issued any prior warning to the inhabitants of the area of the impending air strikes. On the contrary, the area had been considered safer than other districts of the capital and people who had had to flee their homes in other parts of the country had sought shelter there.

As more and more areas were targeted by Israeli forces the number of displaced people continued to grow. A month into the conflict about one million people – a quarter of the entire population of Lebanon – had been forced to flee their homes. Since the ceasefire came into being many are now returning home, but tens of thousands have no home to return to any more; a pile of rubble is all that remains of their houses.

Amnesty International's research indicates that hundreds of civilians were killed by Israeli forces in attacks on residential areas causing massive destruction. Others were killed in attacks and on vehicles as villagers were heeding the calls by the Israeli army to leave their homes in South Lebanon.

Some 40 Israeli civilians were killed in attacks by Hizbullah on towns and villages, including Haifa, Kiryat Shmona, Nahariya, Safed, Ma'alot and Acre. Hizbullah reportedly launched some 4,000 rockets into northern Israel, many of them in areas populated by civilians. Amnesty International delegates who visited the north of Israel to investigate the attacks, found evidence that some of the rockets used by Hizbullah contained thousands of metal ball bearings which increase the potential for fatalities since even those not in the area directly hit can be killed or seriously injured by the spray of ball bearings.

Amnesty International is calling on the UN Security Council to request the UN Secretary-General to establish immediately a comprehensive, independent and impartial inquiry into violations of international humanitarian law by both sides of the conflict, including violations which may amount to war crimes. The inquiry should be conducted by experts who should receive all necessary assistance and resources. The outcome of the inquiry should be made public and include recommendations aimed at ending and preventing further violations.

RECOMMENDED ACTION: Please send appeals to arrive as quickly as possible, in English, Arabic, Hebrew, French or your own language:
- expressing grave concern that the current ceasefire agreement includes no reference to the necessity to uphold requirements under international humanitarian law, namely the need to establish accountability for violations by both sides in the conflict;
- calling on governments to exert their influence on the UN Security Council to request the UN Secretary-General to establish immediately an authoritative team of experts to conduct a comprehensive, independent and impartial inquiry into violations of international humanitarian law in Lebanon and Israel, including violations which may amount to war crimes;
- asking governments to press for such an inquiry to have all the necessary financial and technical resources to enable it to carry out an effective investigation. The outcome of the inquiry should be made public. The inquiry must include recommendations aimed at ending and preventing further violations;
- urging that anyone found against whom there is evidence of war crimes be brought to justice in proceedings which meet international standards for fair trial.

APPEALS TO:
Minister of Foreign Affairs in your own government

COPIES TO: diplomatic representatives of Israel/Lebanon accredited to your country.

PLEASE SEND APPEALS IMMEDIATELY. Check with the International Secretariat, or your section office, if sending appeals after 28 September 2006.