Dan Halutz - An Inside Trader 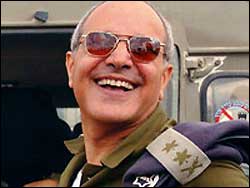 How to Make a Little Profit in a Big War
Rothem Shtarkman,
translated by Gilad Atzmon

Introduction by Gilad Atzmon
Though the following is a translation of an article that appears on Haaretz in Hebrew, you won’t find it in English. Haaretz in English isn’t really an informative outlet; it is rather an Israeli propaganda channel, rather like the English voice of the Jewish State.

However, the following piece is a brief summary of the events of 12 July. Yesterday the Israeli people learned that Dan Halutz, the Israeli Chief of Staff, rushed to sell his private investment portfolio as soon as he knew that Israel was heading towards a war. Seemingly, while his soldiers were fighting for their lives, he, the highest commander in the Israeli army, found time to trade in the stock exchange.

May I mention that at the same time Halutz was engaged in making money for himself, Hassan Nasrallah, the Hezbollah leader, was leading his followers into what happened to be a major historic victory for his people.

Investment Under Fire
How to Make a Little Profit in a Big War
Rotem Shtarkman
http://www.haaretz.co.il/hasite/spages/751091.html

12.00 noon, while a rescue battle is taking place in Lebanon, Dan Halutz, the Israeli Chief of Staff wonders what he should do with his investment portfolio.

12 July, the day when two IDF soldiers were abducted at the Lebanese border was a very busy day for Dan Halutz, the IDF Chief of Staff. While possessing a financially orientated cold mind, he even managed to dedicate some spare minutes to his stock exchange Investment Portfolio file. Here is a short run of Dan Halutz’s 12 July events.

A group of terrorists blow up the border fence and enter Israel. The terrorists, part of a special unit of Hezbollah, are entering via a “dead spot”, a secluded piece of land that is hidden from the view of IDF scouts and guard posts. The terrorists enter Israel without being spotted.
At the same time, two armoured Hammer Vehicles carrying IDF soldiers are patrolling the border between the villages of Zarhit and Shtula.

The terrorists are digging-in and preparing an ambush just 200 meters inside Israel. They are waiting in a valley behind some dense bushes, they manage to take the Israeli patrol by surprise.

The Hezbollah commandos make use of explosives and anti tank missiles. The two Hammers are badly hit. Three IDF soldiers die on the spot, one soldier is severely injured and another is wounded slightly. The terrorists manage to abduct Golwasser and Regev. They drag them into Lebanese territory following what seems to be an accurate and properly planned operation. The IDF soldiers weren’t able to fire even a single shot back. Radio contact with the two Hammers is lost. At the same time the Hezbollah launches some heavy artillery barrages and Katyusha rockets on Israeli bunkers and populated areas at the Western side of the border simply to divert Israeli attention. There are five civilian casualties.

An IDF rescue unit is urged to reach the ambush location. It arrives half an hour too late. It finds the two Hammers. One of them is badly hit. The commander of the rescue force becomes aware that two soldiers had been abducted. The Northern Command declares ‘Hannibal Alert’, an operative procedure following a soldier’s hijacking. Following the lesson learned in previous abduction cases including that of Gilad Shalit, a chasing operation coupled by tanks and heavy armoured vehicles is launched within Lebanon.

11.00 - an hour before Dan Halutz decides to sell his stocks, an IDF tank drives over a large explosive.

Two hours after the start of the event, a second major tragic event is taking place. A Merkava II tank with its crew of four drives over a very powerful explosive just 70 meters north of the border. The lethal explosive is estimated around 200-300 kg. The four soldiers are declared missing in action.

(Halutz calls his investment adviser at the Bank Leumi branch on Dizengoff Street in Tel Aviv and orders him to sell the shares in his investment portfolio, worth NIS 120,000. Over the next two days the value of the stock in the Tel Aviv Stock Exchange loses 8.3 percent of its value, G.I.)

A day of battle in Lebanon.

While on the ground a heavy battle is taking place, at the same time that Israeli units are fighting their way to rescue the bodies of their fellow soldiers but fail due to some severe Hezbollah artillery, Dan Halutz, the Israeli Chief of Staff, calls his bank manager and orders to sell his entire stocks portfolio.

15.00 - three hours after the sale. One IDF casualty and many others wounded.

While the rescue operation is taking place, one more Israeli soldier is finding his death and two others are slightly injured. In response, the IDF attacks ten targets inside Lebanon. Some are in Beirut and others even in the north of the country. The IAF bombs Hezbollah command centres as well as bunkers and some bridges over the Ahawaly River. The bombardment causes some severe damage. The Lebanese report casualties.