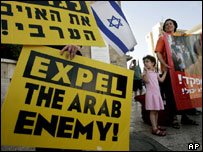 photo at left: You don't have to be a brutal tyrant to want to commit crimes against humanity. Hatred is alive and well in Israel in nice young patriotic families. Israel is a country bad enough as it is, without making historical comparisons.

“Israel Military action is an unjustified aggression that is being carried out in a style of Hitler, in a fascist fashion.” (Venezuelan President Hugo Chavez)

There is a trend amongst us all, the critical voices of Israel and Zionism. Time after time we compare Israel to the Third Reich; we equate the IDF to the Wehrmacht, we find a resemblance between the Israeli Air Force’s tactics to the blitz technique of the Luftwafe, we occasionally associate Sharon’s and Olmert’s war crimes with those of Hitler. I myself have fallen into this very trap more than once. But I have now made up my mind. This fashion of speaking must be stopped once and for all.

To regard Hitler as the ultimate evil is nothing but surrendering to the Zio-centric discourse. To regard Hitler as the wickedest man and the Third Reich as the embodiment of evilness is to let Israel off the hook. To compare Olmert to Hitler is to provide Israel and Olmert with a metaphorical moral shield. It maintains Hitler at the lead and allows Olmert to stay in the tail.

My mother, indeed a very clever woman, challenged me a long time ago asking: “Tell me Gilad, why is it that you and your friends always compare Israel to the Nazis? Isn’t Israel bad enough?” At the time I found her remark rather amusing, but my mother’s cynical instinct was more than correct. Israel is indeed ‘bad enough’. Israel has already established a unique interpretation of the notion of wickedness that has managed to surpass any other evil. It is about time we internalise the fact that Israel and Zionism are the ultimate Evil with no comparison. And if this is not enough, unlike Nazism that belongs to the past, Zionism’s wickedness is a crime which is still unfolding and worsening. Chavez obviously has the absolute right to say what he said, yet I have to remind the adorable Venezuelan President that Hitler has never flattened a country for no reason at all, and this is exactly what the Israelis have been doing in Lebanon for four weeks already and in Gaza for years and years. Looking at the carnage and the devastation in Lebanon doesn’t leave any room for doubt. The current Israeli brutality is nothing but evilness for the sake of evilness. Retribution that knows no mercy. Israel is a devastating collective resurrection of the Biblical Samson. It is a modern representation of the man who kills women, children and the elderly, the Hebraic victorious master of blind indiscriminate retaliation.

For years, politically correct liberals who present themselves as leftists have been insisting upon telling us that Israeli aggression should be understood in expansionist colonial terms. This line of thinking is still promoted by more than a few Jewish peace activists around the world. The reason is simple; as long as Israel is a colonialist state, then the archaic 19th century Marxist orthodox paradigm can be applied to the conflict. Moreover, if Israel is indeed an expansionist colonial regional force, then nothing is categorically wrong with the Israelis, they are just like the British were, but 150 years too late.

Nonsense! The above dated interpretation is fundamentally wrong and deliberately misleading. Moreover, it is not applicable anymore, not even as a Judeo-centric PC fig leaf. Watching the devastation the Israeli Air Force has left in its wake, looking at the death and carnage in Lebanon doesn’t leave any room for doubt. It has nothing to do with colonialism or expansionism. Lebanon and Beirut are not and have never been part of the Zionist Lebensraum aspiration. It is the other way around, till the late 1960’s the Israelis were totally sure that Lebanon would be the first Arab country to make peace with the Jewish State. Israel has never had any interest in the north of the Litani River and in spite of that, Israel has now destroyed every single Lebanese bridge, every airport, every power station. Hospitals are bombed, villages and neighbourhood have been wiped out, one thousand Lebanese civilians have lost their lives and over a million citizens are displaced and homeless. Now is the time to stand up and say it, unlike the Nazis who had respect for other national movements including Zionism, Israel has zero respect for anyone including its next door neighbours. The Israeli behaviour should be realised as the ultimate vulgar biblical barbarism on the verge of cannibalism. Israel is nothing but evilness for the sake of evilness. It is wickedness with no comparison.

Hence, there is no room for comparison between Israel and the Nazis. If a comparison is to be made, then it is the Israelis who win the championship of ruthlessness and the reasons are obvious. Nazi Germany was a tyranny, Israel is a democracy led by a centre-left national unity government. While we do not have any formal objective tool to determine the German people’s approval of Nazi crimes (in the first place, Germans were not informed about Nazi homicidal crimes. Secondly, there was no objective independent poll system active in Germany at the time), the Israelis collectively approve their government’s crimes in Lebanon and this fact is overwhelmingly documented in more than a few polls.

Nazis were indeed proper expansionists, they were trying to take towns and land intact. Carpet bombing and total erasure of populated areas that is so trendy amongst Israeli military and politicians (as well as Anglo-Americans) has never been a Nazi tactic or strategy. Apparently, Israel isn’t trying to take Lebanon; Israelis do not seem to be interested in Lebanese land. They just want to demolish it. One may wonder what it is that they really want to achieve. In fact no one in Israel, or anywhere else for that matter, knows. Do they want to dismantle the Hezbollah? Surely, they have achieved the very opposite. Their impression that Hezbollah is a small faction of minority fundamentalist militia that could be done away with effortlessly is shown as a ridiculous thesis with each passing day. Not only has it demonstrated itself as a force to be reckoned with, Hezbollah is now supported by 85% of the Lebanese people and this includes the Christian population (80% support among the Christian Lebanese). Does Israel want to maintain its power of deterrence? Surely it achieved the very opposite. By now, every Arab knows that the Israeli Army isn’t that glamorous anymore. In fact the photos of the Israeli military boot left on Lebanese soil says it all. In this war, it is the Israeli soldier who is taking off his military boots and running away for his life. Does Israel want to secure its populated centres? Surely it has achieved the very opposite. The more Israel hits Lebanon’s infrastructure, the greater are the barrages of missiles that are falling on Israeli cities. In fact, it is just a question of time before Tel Aviv gets a glimpse into the notion of life in Gaza and Beirut. Indeed Israel has no plan or strategy; instead it practices the lowest form of collective barbarian zeal. The Israelis demolish for the sake of demolishing. Israel is indeed an evil with no comparison.

Yet, we have to admit that Nazis were pretty good in provoking some international outrage. Not many loved Hitler beyond the Germanic world (and the English aristocracy). Israeli cannibalism, on the other hand, is adored by some Western leaders, and it is Blair, Bush and even Merkel who are afraid to stand up to Zionist barbarism. While Nazism was defeated 12 years after it took power, Zionist brutality is a snowball of repulsive anger that knows no boundaries and no end. It rolls over the West and recruits the most morally deteriorated forces around, whether they are Blair and his ilk or some radical American Christian Fundamentalists. Zionism aims at turning our planet into a bloody battlefield. For the time being it is reducing the UN institution into an American neoconservative puppet. It is time we admit that Zionists are standing in the very centre of the so-called ‘Cultural Clash’. While Nazism was a nationalist expansionist movement with extensive yet limited ambitions, the Jewish State and its Zionist lobbies are trying to revive the spirit of a global crusade in the name of a bizarre religious war (Judeo-Christian versus Muslim). If we want to save this world, if we want to live in a humane planet, we must focus on the gravest enemy of peace, those who are wicked for the sake of evilness: the Israeli State and world Zionism.

It is about time to get out of the closet and to say it all loudly. Israel and Zionism endanger our world. It isn’t just Lebanon, Palestine and the Arabs who suffer. It is now Britain and America that are dragged into an idiotic war. It is the entire West that is asked to rescue what the Israelis left out of Lebanon. We all have to de-Zionise ourselves before it is too late. We have to admit that Israel is the ultimate evil rather than Nazi Germany. Abe Foxman and the ADL are correct for a change, we all need a reality check. We should never compare Israel to Nazi Germany. As far as evilness is concerned, we should now let Israel take the lead.

COMING VERY SOON: THE REVELATION OF A TOP SECRET ISRAELI WEAPON THAT HAS LONG BEEN KEPT UNDER WRAPS. GILAD ATZMON HAS DISCOVERED DETAILS OF THIS DESTRUCTIVE NEW WEAPON USED AGAINST THE LEBANESE PEOPLE.