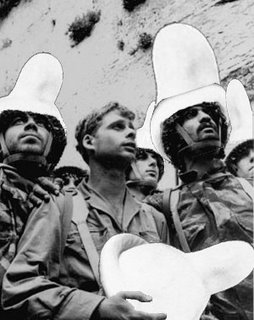 As the Israeli Army buries its dead in what seems to be a war that the Jewish State can never win, we happen to learn from a high official within the Pentagon that Israel is about to make use of what seems to be its ultimate devastating weapon. We also have discovered that the recent French-American diplomatic push for a UN Security Council Resolution calling for an immediate cease-fire is there to postpone the deployment of this new weapon, preventing Israel from dragging the world into a new horrifying phase of warfare, with results whose outcome cannot be predicted.

According to the Pentagon official, who asked that his identity not be revealed for obvious reasons, in a private telephone call between the Israeli Foreign Minister Mrs Tzipi Livni and the American Secretary of State Ms Condoleezza Rice, Livni confessed that as an act of despair, Israel is left with no recourse but the immediate deployment of its entire WW Martyr Brigade, (code name for the new weapon). Though Ms Rice initially attempted to persuade Livni to avoid undertaking such a reckless action, our foreign reporters near the Israeli border with Lebanon already confirmed that such deployment is already taking place.

As the news keeps filtering in from the battlefield, we hear more and more about weirdly shaped Israeli combatant platoons popping out of some large armoured containers that look very much like oil tankers. Sky Fox, our correspondent in Kiryat Shmone has been reporting for days that the new Israeli platoon looks like nothing he has ever seen before. In one of his latest reports he argued that the new Israeli warrior looks very much like a heavily armoured giant penis. As the details emerge at a steadier rate, we now realise that the WW Martyr Brigade refers to Israel’s most secretive units: the ‘Wailing Wall Martyr Brigade’. In the last 24 hours we have learned as well that WW martyr commandos are already operating deep within Lebanon, and even north of Beirut destroying Katyusha launchers and Hezbollah infrastructure.

Dr. Moishe’le Heritage of the Negev University’s History Department told us that already in the early 1950’s Shimon Peres, then a young politician closely related to Ben Gurion, brought the attention of the Israeli Government to a scientific study by the famous Jewish Harvard biologist Prof. Willy Short. The scientific work explored the varied possibilities of cloning and transformation of isolated human tissue into functional operating human subjects. With the academic approval of Prof. Short, Peres advised the Israeli government that the Jewish State could clearly benefit from genetically cloning tons of foreskins that are usually binned after the Brit Mila ceremony (a Jewish tribal blood ritual still very common amongst Jews both religious and secular). Peres and his team had found out that more than 7.8 tons of Jewish foreskins were being disposed of every month. Totally inspired by Short’s research, Peres realised already then in the 1950’s, that tons of fresh Jewish DNA penis waste could be transformed into battalions of young Jewish platoons, sailors, pilots and Mossad agents. Yet, while in his research Prof. Short insisted that it was only just a question of time before genetic engineering would allow standard technological practice of such nature, Ben Gurion, the Israeli PM at the time, decided to explore Short’s different scientific and technological ideas without delay.

Within days Israel allocated 15% of its annual budget towards a major scientific laboratory known as Jewrassic Scientific Park near Kfar Giladi. Within less than a month, a team of leading Jewish scientists including Dr Doovid Little (Doolittle) from Oxford. The Swedish zoologist Prof Pipi Chopsky and even the world renown Berkley physicist Prof Dick Cutoffvitz were recruited. Together with Prof Willy Short they all made Aliyah, settling in the North of Israel and helped create the Jewrassic Scientific Park, turning it into the secret core of Jewish power and the bank of some infinite Jewish human resources.

Not many people know, but even El Al, the Israeli commercial airliner that seems to be an innocent air carrier specialising in serving Kosher food as high as 30,000 ft. in altitude, is in fact operating under the direct control of the Jewrassic Park Headquarters. Seemingly, El Al’s primary national mission is to deliver live foreskin stock from the Diaspora to the scientific park in Northern Galilee. Each of El Al’s Boeing jets is equipped with a large refrigerated compartment made especially for transporting deeply frozen tiny live tissue segments.

While the Jewrassic Scientific Park started to operate as a research plant already in the early 1950’s, it wasn’t until 1956 that the first ‘Motherless Jewish Soldier’ was born. Though in its early days the Scientific Park managed to produce one soldier a month at the very most, nowadays, in peak production, with the development of genetic engineering and other new technologies, it can clone a paratrooper division within days. In other words, Israeli military livestock is basically unlimited not to say infinite. Yanka’le Schwantz from the Scientific Park told us that “with the ‘Motherless Soldier’ in mind, for the first time in our Jewish history, Israel is not afraid of large scale casualties amongst its combatant soldiers.”

According to an official Israeli unofficial source, the deployment of the Wailing Wall Martyr Brigade is taking the Hezbollah by complete surprise. Jihad Abu Az Zamman, the self-appointed Hezbollah spokesman from London, confirmed that Israel is indeed changing its tactics: “…the Israelis are currently deploying thousands of its soldiers against each of our heroic Guerrilla fighters. While in the past Israel was proud handling a war of ‘a few against very many’, now things are turning the other way around. It is our Hezbollah warrior who single-handedly defeats divisions and brigades of Israeli cowards.” Israeli Defence Minister Amir Peretz confirmed already over a week ago that Israel is putting on the battlefield some new tactics and strategies it has never before used. We are now guessing that it was the WW Martyr Brigade and the deployment of massive Israeli military forces he was referring to.

We have learned as well from the Israeli source that some of the early Jewrassic clones made it into the Israeli high command and beyond. There is some gossip in Israel that Dan Halutz (Daniel Pioneer) is actually the first foreskin embryo to see the light of day. When Dan was eighteen he joined the Israeli Air Force, he was indeed one of Israel’s best pilots ever and it didn’t take long before Dan became the Air Force commander and later the IDF Chief of Staff. Yet it is probably Dan Halutz’s Jewrassic past that may explain why the Israeli Major General behaves and looks like a dickhead.

Just before closing this news update it is rather crucial to mention that the international scientific community is taken by shock at the devastating news from Israel. “Using science and genetic engineering to spread violence is unforgivable,” said yesterday PhD Adolph Dove from the EU Dogwatch for Science and Ethics. “Baaa…” was the immediate reaction of Dolly the Scottish heroic scientific clone. Jewish anti-Zionists around the world are outraged as well. We learned just minutes ago that two of the most famous British Jewish ethnic campaigners, Tony Trans and Roland Greenpiece plan a huge protest in front of London’s Israeli Embassy next Friday. “I want my Foreskin back,” shouts Greenpiece. “Using my DNA against the innocent Lebanese people without my approval is nothing but an utter war crime,” cries out Tony Trans. On the other hand, more than a few Christian Evangelical Americans already contacted the Jewrassic Park toll-free number and offered to donate their testicles in support of the ‘Israeli war effort’. We have learned from Yossi Bollox that Jewrassic Park has politely rejected the kind Evangelicals due to some obvious racial purity reasons.

We will be following this developing story and keeping you informed.

Thanks to Zaki for finding this top secret photo.