Gilad Atzmon - Why is it so hard for an Israeli to admit that an Arab combatant is just slightly better? 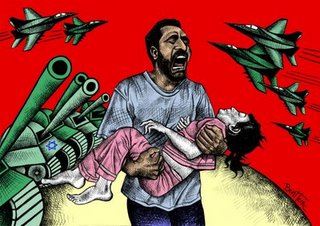 (illustration by Ben Heine)
It is now clear that as much as the Israeli Army doesn’t know how to win a war, the Israeli people do not know how to lose one. Already at the late stages of the recent wave of hostility in Lebanon the Israelis were desperately searching for a scapegoat, someone to blame, someone who would take personal responsibility for the humiliating Israeli collective defeat.

It didn’t take long before the Israelis turned en mass against Dan Halutz, their IDF Chief of Staff. They accused him of being an ‘arrogant pilot’, for being ‘detached from reality’ and for ‘not preparing the Army to win a war’. Dan Halutz, no doubt a qualified war criminal as well as an Israeli stock exchange inside trader, dismissed his critics. Yet, as one may expect, Halutz wouldn’t stand up and admit in public that the leader of a miniscule Arab paramilitary force, the legendary Hassan Nasrallah was just slightly better than himself in wining a battle and concluding a war. In fact, Nasrallah was just better than every Israeli general in using his force, in manoeuvring his fighting units, in strategic moves and tactical decisions. Halutz and his staff generals wouldn’t admit it because being Israeli soldiers, a product of Jewish nationalism and crude racism, they are all supremacist to the bone.

While in a meeting with reservist commanders last week Halutz learned about an IDF commander who refused to rescue combatants just because “they were not under his direct command”. He learned as well about another Israeli commander who managed to evade the battlefield in the midst of the fight. The commander was found hours later hiding inside a tank. Yes, the Israelis are far from being heroes, their paratroopers do not shoot from the hip as much as their tank commanders do not expose their upper body while the battle goes on. They all prefer to hide behind their glorious Merkava tank’s armour. However, they all fail to admit that the Hezbollah are just exactly the opposite. The Hezbollah warriors do shoot from the hip and they don’t have armoured vehicles to hide in. Yet, the Israelis would prefer blaming themselves rather than simply admitting that an Arab fighter happens to be just slightly better.

These days, an extensive Israeli reservist rebellion is emerging in Israel. The humiliated IDF fighters are somehow very unhappy. They felt unprepared for the war. Their weapons were faulty, so they say, they lacked the necessary gear, the ‘catering services’ failed to serve their food exactly when they expected it. If this isn’t enough, they insist as well that intelligence was misleading and orders where confusing. Like the archetypal Jewish mother, the newly born Hebraic Samson is a venerable effeminate character who would prefer to endorse the role of the victim. I believe that when the Israelis engage in self-criticism they tend to regard themselves as a collective of outspoken liberal beings. But in fact, they all lie to themselves. By putting themselves down they save themselves from confessing the clear fact that at least in this round the ‘Arabs’ were just far better.

The reservist rebels call for the immediate resignation of Olmert, Peretz and Halutz. Peretz so they say, is just a small ‘Union leader’, he lacks the capacity to command the army of a hostile state that insists upon putting world peace at a constant threat. They may be right. Peretz isn’t a natural talent. Indeed he was quick to join the never ending list of Israeli war criminals, he gave the Israeli Army the green light to bring ‘Lebanon to its knees’, to kill so many civilians, to destroy a country’s civil infrastructure. Yet Peretz was not a tactical or strategic visionary. He was good enough to spread death in the region but he himself didn’t understand what all this loss was there to serve. Unlike Peretz, who became a mass murderer just a few days into the war for absolutely no reason, Sheikh Nasrallah has managed to defeat Israel without bringing the state to its knees, without killing many civilians. Nasrallah won a war without being a mass murderer. And the question to be asked is whether the time is ripe for the Israelis to admit that a Lebanese Shiite leader is far more advanced both intellectually and morally than their own leaders. May I tell you, this is not going to happen. The Israelis are racist to the bone. Even now after being defeated by a bold patriotic group of warriors, they are still convinced that they are fighting a fanatical bunch of sub-humans.

And what about Olmert, the man who was voted to implement a sickening judeocentric unilateral peace agenda and managed to bring his country into a miserable war less than four months later? Would he admit in public or even to himself that it was Assad, Ahmadinejad and Nasrallah who smashed the Israeli power of deterrence without causing any damage to the infrastructures? They did it without killing many civilians at all, just with light weaponry and conventional rockets, without American planes and Merkava tanks. They did it without hundreds of nuclear bombs. Will the Israelis admit that Assad, Ahmadinejad and Nasrallah are just slightly more clever than their own miserable leadership whom they ‘democratically elected’?

I say no, I say never! Israel is a racist national state. It is supremacist to the bone. The Israelis are not capable of regarding their neighbours as equal human beings. This is exactly why Israel has never been and never will be a partner for peace. In order to make peace you must first respect your foe.