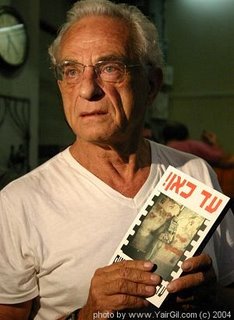 Amir Pasteur, aged 32, Captain from the Israeli army, has been serving since past 31 July a sentence of 28 days of imprisonment for rejecting (yet he’s not been the first one) the call-up.

The pacifist movement has always showed great attention to the “refusniks” phenomenon.

To know more about it, we’ve spoken with Peretz Kidron, who coordinates international relations on Yesh Gvul’s (“There’s a limit”) behalf, one of the major refusniks’ groups.

Besides the calling for recruits to refuse serving, are you carrying out other actions?

“As Yesh Gvul, we’re preparing a formal demand to the judiciary institutions in order to open an inquiry over war crimes. There are many events that, from a typically legal standpoint, may potentially be qualified as war crimes: attacks against the civil population, against the private and state infrastructures, the power plants, there’s also the refugees’ matter; the attacks themselves against the Lebanese army, towards which there’s officially no state of belligerency. Of course we don’t expect to achieve great results, yet we mean to promote the issue and do our best so that the ones responsible for these actions may be put on trial.”

What is the atmosphere among the public opinion?

“The climate is very harsh. About 90% of population totally approves of the war, I’m obviously referring to the Jewish population. It goes without saying that the Palestinians of Israeli nationality have a different point of view. We’ve been among the first ones who have promoted the protest initiatives, indeed we’ve set up the first demonstration that has taken place before the Prime Minister’s residence. There are mobilizations practically every day and, in Tel Aviv, on the last two Saturdays, largely attended demonstrations took place. As always, at the moment, only the most radical groups are taking action.”

“What’s coming about now I call “the big toe syndrome.” Do you know when you go to sea and put your toe in the water in order to feel how cold the water is? Generally, when the protest gets rampant, even the less radical organizations get braver and take position. But, before taking the initiative, they want to understand well. It was the same during the first Intifada.
The situation is truly difficult, there’s enormous support towards the army and an atmosphere of excitement due to a defensive war that, therefore, is regarded as being fair.

To have let a different voice be heard is very difficult. We have nearly always had to resort to ads by payment. In such situations, media are very patriotic and nationalistic, and to the radical left it’s very hard to get any attention. The first, hesitant signs of change are happening, yet the support to the government and the army remains very strong.

There’ve been 51 dead over Israeli territory, many people are living in the refuges, the economic and material damages are considerable, people are really frightened. Jerusalem is fraught with refugees. Obviously, this stiffens the government’s stance, which urges war.

Even Gaza’s situation, where the attacks by the army are going on, provoking every day dead and wounded, is nearly passing unnoticed, excepting for the right which keeps holding that the unilateral withdrawal was a mistake. As a matter of fact, I too think it was a mistake, even if not for the withdrawal in itself but because it happened unilaterally instead of being grounded on an agreement between the sides.”

Did you except something different from this government?

“Frankly, yes. It has let me down very much. It led the electoral campaign speaking about the necessity of cutting military costs, so as to have more resources for social expenditures. On the contrary, it immediately sided with the positions of the army, over which, it seems to me, it has no control.

Indeed, I have the impression that it isn’t even trying to have any control over it and that it’s the army that makes decisions while the government limits itself to putting them into practice. Neither Peretz nor Olmert are professional military and therefore are liable to have a subordinate role towards the generals. They fear that the high-ranking officials from the army might overtake them in the public opinion’s consensus.”

Are you stating that this fact, that for the first time there are important members of the government not having a military career, is giving the army more power? Isn’t it a paradox?

“No, it isn’t. It’s about a structural matter, within the system. There are very few precedents in which the government acted notwithstanding the negative opinion of the army, which is its main interlocutor and the only one able to put forward structured agendas. For instance, there’s no organism such as the National Security Council as exists in the US. Not that, after all, there is much difference as regards to the choices they make but, at least theoretically, diverse judgments and options are possible, the military apparatus not being the sole interlocutor of the government.

Recently, Amir Oren, military correspondent of Haaretz, hence a well-informed person, discussed two important issues in one of his articles, i.e., about the fact that the army had been preparing this situation for months and the fact that General Iland, at the time advisor for the national security, advocated the necessity of a political and diplomatic initiative, about an exchange of prisoners and interventions upon the situation at north, namely the Sheeba Farms issue. Olmert sacked him.”

Translated from Italian by Diego Traversa and revised by Mary Rizzo, members of Tlaxcala (www.tlaxcala.es), network of translators for linguistic diversity. This translation is on Copyleft and may be reproduced citing the source.