PRIME MINISTER SINIORA: “LEBANON WITHOUT HEZBOLLAH ONLY WHEN THE AGGRESSION CEASES” 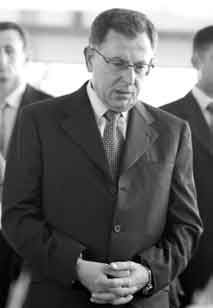 By Daniele Mastrogiacomo from the print version of La Repubblica 5 August, 2006

BEIRUT—Mr. Prime Minister, who has the key to stop this war?

“Israel. It’s Israel alone who holds the key to put an end to this carnage. The government as been very clear: we have our own responsibilities. But now we are victims of a brutal aggression. And the one who is attacking us is Israel.”

Fuad Siniora, former right hand of the assassinated Prime Minister Rafik Hariri and like him, a Sunni, leads a coalition government which resulted from the elections last summer. He’s a tired, exhausted and tense man. But he is still able to maintain his enthusiastiasm and conceive a future in which Lebanon may be united, free and, above all, independent.

Siniora welcomes us at Saray Palace, the government’s headquarters, a wonderful stone-made building that was erected by the French at the time of the Mandate and that looks onto the core of the financial city, with its by now abandoned skyscrapers. He grants an interview to Repubblica, persuaded that Italy and its Prime Minister Prodi may still do very much to impose an “immediate and unconditional” ceasefire.

The actors on the diplomatic scene dwell upon Hezbollah’s disarmament.

“Nobody, and Israel before anyone, can impose something whose decision is up to the Lebanese. People often mention the UN resolution 1559 but the resolutions that others have never complied with are little discussed.”

Yet, there’s the matter of Hezbollah.

“Hezbollah has been created by Israel. Of course, not materially, but it provoked the conditions so that it would grow and strengthen with the passing of time. Lebanon was occupied for twenty years and Hezbollah have managed to account for its presence in southern Lebanon. It has fed its consensus by setting itself up as freedom’s champion. It fought for achieving the Israeli army’s withdrawal and it is still fighting that now.”

“Israel decides in a unilateral way, as it is used to doing. I put forward a seven-point plan, precisely itemized. We’ve talked about it also within the government and I chalked up unanimous approval. The same consensus that I found also amongst the international community. There were all the premises so that Rome Conference might achieve an immediate ceasefire. It failed only because of someone’s opposition.”

Don’t you feel to be trapped by the decisions taken by external forces?

“I feel like a father who sees his family being cut down. Pressures are very strong and continuous. But I look at what is before the eyes of the entire world. I see my country being destroyed, bombed, killed, divided, economically collapsed, socially under the burden of an invasion that breaks any rule of international law. I am the Prime Minister and feel responsible for my people.”

Has the outbreak of this war ìbeen brought about by the kidnapping of two soldiers?

“Do you think it was caused by that?”

What do you think, Mr. Prime Minister?

“At this moment, I wouldn’t want to get lost into analysis that may draw away from reality. The reality is that Lebanon has suffered seven invasions. I’m speaking of invasions, not attacks, that by now are about thirty. Qana’s slaughter is the second one in only ten years. The same village, the slaughter caused by the same hand. I can see only dogged anger in all this.”

How do you think you’ll get out of it?

“It’s others who must get out of the country. Now, I have to see to the unity and the closeness of the Lebanese. Up to now we have reckoned 900 dead people, three thousand wounded, one million refugees, two and a half billion dollars of damages regarding infrastructures. The sole priority is that one of stopping the aggression.”

The dispatch of an international force is in view. Do you agree to that?

“We’ve talked about it and we’ve found an agreement. We favourably regard an interposition force under the UN’s aegis. As long as it is deploying the national army over the whole territory.”

Will Hezbollah be part of the future national army?

“It’s a chapter we’ll face. But it’s only us who will have to do this and according to our pace. We’re a country which has come out of 15 years of civil war. By virtue of its dynamism, Lebanon has been reborn, developed and modernised: it became a point of reference to the international financial world. Hezbollah won’t exist any longer if the conditions that created it are removed.”

“Nonetheless, a peace plan need to be discussed, not imposed. Let’s deal with the chapter regarding the lands being encroached upon by others and belonging to Lebanon.”

Are you referring to the Sheeba Farms?

“If we want a stable and lasting peace, we have to go back through time, facing knots that have never been untied. For years we’ve been laying a claim to strips of land belonging to us. Let’s have them returned and you’ll see how the tensions will slacken. Hezbollah has played an important role, has defended borders being continuously trespassed upon, it copes with the invasion of a sovereign state. Removing causes means also removing the effects.”

Will your government have the necessary strength to administrate this change?

“Whoever rules, he will have the duty of managing the new phases. We don’t need wars and aggressions. We need to strengthen our unity. Yet, a strong, united and independent Lebanon doesn’t please and many work to hamper that.”

Translated by Diego Traversa and revised by Mary Rizzo, members of Tlaxcala (www.tlaxcala.es) network of translators for linquistic diversity. This translation is on copyleft.