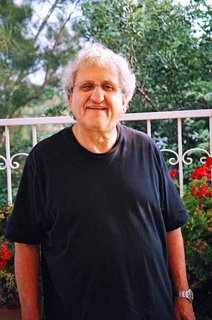 At the left, self-declared "man of peace" A B Yehoshua smiles while thinking of the peace the bombs and fighter planes are bringing to Lebanon. I think a boycott of his books is in order.

Dedicated to the too few Israeli intellectuals who do dare speak out against this war.

All generalizations are wrong, except this one: Israeli liberal intellectuals are against war. They have always been against it, and they even suffered greatly for their critical views, as they stress proudly. They were against the previous war, they will be against the next war, they are against all wars. There is just one minor exception, though: the present war, every present war, which they always support. Because the present war – well, that's something totally different from all those other wars! How can you even compare?! The present war is always inevitable, and necessary, and just, and worthy of support.

Rhinoceros King Ari Shavit, journalist for Ha'aretz, once a "Peace Now" activist and senior member of the Association for Civil Rights in Israel (ACRI), writes,

"Israel is currently waging the most just war in its history. […] Therefore, anyone who yearns for Israel to withdraw in future from occupied territories to recognized permanent borders must stand by Israel in this war. Anyone who wants peace, stability, and an end to the occupation must back up Israel in its just war." (Ha'aretz, July 18, 2006)

To put it briefly, then, War is Peace and Peace is War; and Israel is devastating Lebanon just in order to give the Palestinians their freedom.

If Shavit's intellectual inspiration sounds literary (George Orwell), historian Prof. Yosef Gorny of Tel Aviv University would rather go back to History – in the upper case. In a short article titled "The Second War of Independence" (sic!) he writes:

"In a reality in which Iran threatens the free world, this struggle against its proxy in Lebanon is a war for the existence of the State of Israel in the future. In this respect, though under completely different circumstances, the struggle to create the State itself in the War of Independence about 60 years ago and the war nowadays have a common denominator. And here lies also their common justification: the struggle for our national existence." (Ha'aretz, July 30, 2006)

Gorny's formulation is just a little more pathetic than others', but the endlessly recycled notion of Hezbollah being an existential threat to Israel's existence has brainwashed the minds of so many Israelis. Playwright Yehoshua Sobol, for example, describes the Hezbollah attack (as well as the Qassam missiles from Gaza) as "an announcement that our very self has no right to exist" (Ma'ariv, July 21, 2006). Insane as it may sound, people have been persuaded that having a good part of Israel within the reach of Hezbollah missiles is an existential threat. At the same time, the fact that every spot in the Middle East – and far beyond – is within the reach of Israel's conventional and unconventional weapons is not conceived as an existential threat to anybody: after all, Israel is a responsible country that just wants peace…

Writer A. B. Yehoshua, the self-designated "man of peace," says it all in his typical, more primitive manner:

"At last," says Yehoshua frankly: the old "peacenik" had indeed been yearning for war for a long time. Israeli fascist leader Affe Eitam once admitted that the one thing that thrills him is "the sight of men going to war"; for Yehoshua, purification is the desired effect. Two years ago, he was dreaming of bloody Israeli operations in Gaza; his dream has now come true, though it hardly gets to the media thanks to the events in Lebanon:

Rafi Ginat, editor-in-chief of Israel's highest-selling daily, has even more plastic fantasies. On the front page of his newspaper he urges the government to "wipe out villages that host Hezbollah terrorists" and "wash with burning fire the Hezbollah terrorists, their helpers, their collaborators, and those who look the other way, and everyone who smells like Hezbollah, and let their innocent people die instead of ours." (Yediot Ahronot, July 28, 2006)

Popular songwriters and singers like the orthodox Amir Benayon are seldom liberals, so nobody raises a brow when he dresses the same thoughts in more poetic robes:

"My haters urge to kidnap me, to wipe me out,
And inject me with poison…
The cruel enemy murders yet another child,
And the enemy must die… must die…."

The Israeli intellectual, however, would shrug his shoulders at this as typical "Eastern primitivism." We liberals have our highbrow poets, with refined taste and overwhelming erudition. Like Ilan Shenfeld, who claims he has "always been a leftist" – which is why, like every true poet, he suffers so much in this war: "It's not easy for me to write a poem that supports war and urges to invade a sovereign area of another state and devastate it." Shenfeld overcame this difficulty, and his poem, alluding to "the national poet" Bialik, shows once again that true agony always yields the best poetry:

"March on Lebanon and also on Gaza with ploughs and salt.
Destroy them to the last inhabitant.
Turn them into an arid desert, an uninhabited, turbid valley.
Because we yearned for peace and wanted it, and our houses we destroyed first,
But they were a wasted gift for those murderers, with beard and Jihad bands,
Who shout: 'Massacre now!,' and who have neither love nor peace,
Neither god nor father. […]

"Save your people and make bombs,
and rain them on villages and towns and houses till they collapse.
Kill them, shed their blood, terrify their lives, lest they try again
To destroy us, until we hear from tops of exploding mountains,
Ridden down by your heels, sounds of supplication and lamentation.
And your pits will cover them. Whoever scorns a day of bloodshed,
He should be scorned. Save your people, and make war." (Ynet, July 30, 2006)

Ironically enough, Shenfeld's poem was posted on the day of the (second) massacre in Qana – a coincidence that left even the poet himself somewhat embarrassed. The bloodbath wouldn't have embarrassed a much more experienced Israeli propagandist: Amos Oz, AKA the Zionist peace camp incarnate. Having supported PM Ehud Barak long after he started the murderous crushing of the Intifada, Oz now counts on his readers' short memory when he writes, under the Orwellian title "Why Israeli missiles strike for peace":

"Many times in the past the Israeli peace movement criticized Israeli military operations. Not this time. […] This time, Israel is not invading Lebanon. It is defending itself[…]. The Israeli peace movement should support Israel's attempt at self-defense, pure and simple, as long as this operation targets mostly Hezbollah and spares, as much as possible, the lives of Lebanese civilians." (Los Angeles Times, July 19, 2006)

And here, lest he be embarrassed by some future massacre of civilians, Oz remembers to add the following standard propaganda theme, for any eventuality:

"(This is not always an easy task, as Hezbollah missile-launchers often use Lebanese civilians as human sandbags.)"

Hezbollah is not Israel's only enemy: global intellectuals are always a favorite target of our patriots too. Commenting on their open letter against the war, prominent literary critic Ariana Melamed puts Noam Chomsky, Arundhati Roy, José Saramago, Howard Zinn, and Naomi Klein on par with the Nazi philosopher Martin Heidegger (Ynet, July 24, 2006), no less. What the hell do they have in common? Well, they are all intellectuals who were mistaken.

But the worst of enemies is the one from within. Jerusalem Hebrew literature scholar Prof. Gershon Shaked accuses "the [Israeli] left" of "a desire to please the Europeans" to the extent of "losing all moral criteria, not to mention a minimum of patriotism." Similar, though somewhat more detailed is the explanation of senior journalist and analyst Dan Margalit, who openly accuses "the radical left" (referring to the liberal-left Zionist Shulamit Aloni) not only of "unprecedented moral abyss," but also of "love towards its master in Beirut, Damascus, and Tehran." (Ma'ariv, July 26, 2006)

Haifa sociologist Prof. Oz Almog all of a sudden discovers an "appalling similarity between 1933 and 2006," with Iran's president as the new Adolf Hitler, "Islamic fundamentalism" as the new Nazism, and all those who dare criticize Israel's atrocities as the offspring of European anti-Semites (Ynet, July 30, 2006). Such banal historical analogies are, of course, always at hand. In the past, writer Yoram Kanyuk, repeatedly boasting of his peace activism somewhere in the previous millennium, expressed his support for the then-Likud leader Ariel Sharon by comparing him to Winston Churchill – in the bloodiest days of the Intifada, during "Operation Defense Shield" (Ha'aretz, May 15, 2002). Now, Kanyuk can hardly stop short of turning PM Ehud Olmert into a new Napoleon, or is it Julius Caesar?

"In spite of the massive killing, I support this war and I support Olmert, who is running an important, principal, perhaps even mythical war. In a brief moment, he became a great commander." (Ynet, July 23, 2006)

When the American invasion to Iraq had to be justified, Kanyuk compared Saddam Hussein to Hitler (Ha'aretz, Oct. 8, 2002). On his flight from Kanyuk's sharp feather, Hitler has managed to move a few hundred miles eastward, convert to Shi'ite Islam, and even grow a beard – but failed to fool our literary detective, who develops WWII plus Armageddon into a WWIII made in Israel:

"The Iranians and the Hezbollah say precisely what they think. They want to put us in a hard crisis and them find a way to eliminate us. When Hitler spoke this way, people were laughing at the clown. The left is still laughing. But one can say to its credit that in those days too the international left was laughing. Europe with tens of millions of Muslims living there, not a few extremists among them, will get the blow, because the new world war starts in a small step in Bint Jbeil." (Ynet, Aug. 4, 2006)

The Silence of the Doves

As in every atrocity, there are notorious bystanders: those who support evil just by doing nothing to stop it. Not a surprising position for a mainstream novelist like Shulamit Lapid, whose great wisdom and modesty produced the following pearl:

"I don't want to say anything, because everything is very dynamic and what's true today won't be true tomorrow[…]. It would be insolent to express any opinion on the subject." (Ha'aretz, July 21, 2006)

More disappointing, however, is pop singer Aviv Gefen, for many Israelis the incarnation of a left-wing protest singer:

"I am a man of peace, dissident, pacifist, you know. But they simply imposed war upon us, I don't see any other way to avoid it[…]. I oppose the occupation in the clearest way, but today, I think, one has to keep silent a little." (Walla, Aug. 5, 2006)
thanks Jeff and Inge for the forward.