Refugees in Palestine and Refugees in Italy: the case of the Sanabel cultural group 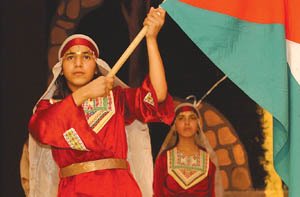 From Forum Palestina
On 23 June, a group of 9 Palestinian men and women arrived in Italy, invited by various solidarity associations for a tour to share their culture and traditions as well as to communicate to others the situation in Palestine. SANABEL is the name of the group, meaning spike of grain; in Gaza, they participate together with many others in a political-cultural association that is present in the entire territory, “Palestinian Progressive Youth Union” (PPYU). The aim of the association is the intervention and organisation of social-cultural activities among the youth and student population, which is forced to live in the harsh prison conditions of the Gaza Strip.

On 24 July they were scheduled to make their return to Gaza, but the Egyptian airline “Egypt Air” refused to embark them at Fiumicino (Rome’s Airport) to bring them home.

The Rafah border crossing, the only entryway to Gaza for the Palestinians, has been closed since 24 June, day of the massive invasion from Israel, with the “Summer Rain” Operation.

The Israeli army, despite the fact that it officially “has no more control” over that border after the withdrawal of the settlers from the Strip, in fact opens and closes it on their own whims. Not even the European force EUBAM (European Union Border Aid Monitor, under Italian command since November 2005, as a matter of fact), established for the help and the control of the border together with the Palestinian Authority and the Egyptian authorities, according to the agreements among all of the authorities, including the Israeli one, has known how or wanted to impose their will for the opening of the border for the passage of the very many Palestinians blocked since before the invasion in the strip of land between Egypt and Gaza. Still today, there are approximately 10,000 Palestinians massed on that bit of land; eleven of them have died from complications due to the heat, from exhaustion and the lack of medical aid; the Egyptian government denies entrance into their country to other Palestinians who would then come to increase this mass, therefore determining in many European countries the presence of groups of “double refugees”, such as the youth of Sanabel. The European governments, who have the responsibility of guaranteeing the passage of the Palestinians across the passageway, are immobile. The Italian government, committed in this period to constructing a role for itself as a “facilitator” within the conflict that sees the Arab and Israeli populations opposed, seems much more interested in determining the entity of the military mission to send to Lebanon (making a bluff of the “pacifist mandate” received by the electorate) rather than “facilitate” for real the lives of the people of the region, for example, making practicable the sacrosanct right of return to one’s own home for these Palestinians.

Despite the latest hostile aggression against Lebanon, that has caused more than a thousand deaths among the population and the complete destruction of the country, Israel is not condemned, but on the contrary, the US and the European Union approve of their genocidal operations with the pretext of “right of self-defence”. It is a right that evidently for the imperialist West does not count for the Iraqis, Palestinians and Lebanese, labelled as “terrorists” if they practice the right of self-defence and resistance against those who occupy their countries.

The case of Sanabel is only but one small example of the war that the Palestinians and all of the Arabs have been victims of for the past 60 years by the Zionist politics of the State of Israel. Blocked at Fiumicino, the youth have been guests for several days in a way of emergency by single individuals, associations, immigrant structures and only after an action of protest did the Roman Municipality find itself forced to provide a solution that was more dignified at least regarding the matter of lodging, providing a structure that is suitable to the housing of the refugees.

Since then the daily resistance of Sanabel has only entrusted itself to the solidarity of sympathisers and in reality, are able to have enough money for basic needs by donations that are made: for this reason, we make the appeal for a collection of donations to send to the young men and women, through payment with Poste Pay number 4023 6004 3099 5144 (Italian Postal Service) to the account of Shokri Al Jawazneh.

We also make an appeal for work in a coordinated manner to organise mobilisation that will force the Italian government to work to put an end to this state of affairs that is nothing short of a deportation. Lastly, we express our unconditional solidarity to the resistance of the Arab people even in Lebanon who have shown the road to obtaining the respect of their rights: that of struggle!

To show support to the youth of Sanabel and collect donations, we invite everyone to a Dinner Thursday 31 August at 19.30 at the Panetteria Occupata, via Conterosso 20 Milan, Italy.

Coordination of Struggle for Palestine
coordpalestina@yahoo.it

Translated from Italian by Mary Rizzo, member of Tlaxcala (www.tlaxcala.es), network of translators for linguistic diversity. This translation is on Copyleft.