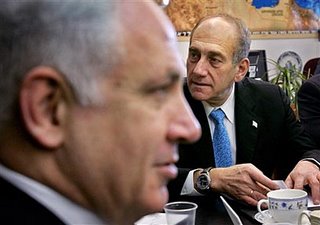 The Israeli invasion of Lebanon was planned between top Israeli officials and members of the Bush administration. On June 17 and 18, former Israeli Prime Minister Binyamin Netanyahu and Likud Knesset member Natan Sharansky met with Vice President Dick Cheney at the American Enterprise Institute conference in Beaver Creek, Colorado. There, the impending Israeli invasions of both Gaza and Lebanon were discussed. After receiving Cheney's full backing for the invasion of Gaza and Lebanon, Netanyahu flew back to Israel and participated in a special "Ex-Prime Ministers" meeting, in which he conveyed the Bush administration's support for the carrying out of the "Clean Break" policy -- the trashing of all past Middle East peace accords, including Oslo.

After the AEI meeting, Sharansky, who has the ear of Bush, met with the Heritage Foundation in Washington and then attended a June 29 seminar at Philadelphia's Main Line Haverford School sponsored by the Middle East Forum led by Daniel Pipes. Sharansky appeared with Pennsylvania Senator Rick Santorum who this past Thursday was beating the war drums against Syria, Iran, and "Islamo-fascism" in a fiery speech at the National Press Club attended by a cheering section composed of members of the neocon Israel Project, on whose board antorum serves along with Georgia Sen. Saxby Chambliss and Virginia GOP Rep. Tom Davis.

Our Washington sources claim that the U.S.-supported invasions of Gaza and Lebanon and the impending attacks on Syria and Iran represent the suspected "event" predicted to take place prior to the November election in the United States and is an attempt to rally the American public around the Bush-Cheney regime during a time of wider war.

The current Israeli assault on Lebanon was stage-managed between the government of Israeli Prime Minister Ehud Olmert and neocons in the Bush administration, according to well-connected sources in the nation's capital. The Bush administration had prior knowledge of and supported Israel's planned attacks on Gaza and Lebanon, the sources have revealed. In addition, there was no move by the Bush administration to warn Americans in the Occupied Palestinian Territories or Lebanon to leave the areas before the Israeli invasions. No travel warnings were issued to U.S. citizens in an attempt to mask Israeli attack plans, an action that resulted in last-minute Dunkirk-like sea evacuations of foreigners from Lebanon.

The first indication that Israel pre-planned its assault on the Palestinians came early this month when the Israelis began denying entry to the West Bank to Palestinians holding U.S. passports. The U.S. Embassy in Tel Aviv and the U.S. Consulate in Jerusalem refused to intervene with Israel, claiming it was the decision of a sovereign nation. The denial of entry to Palestinian-Americans was a violation of the Oslo Accords and the Geneva Conventions. The United States does not officially recognize Israeli sovereignty over the Occupied Palestinian Territories.

Washington insiders report that the Bush administration's coordination with Israel in the attacks on Hamas and Hezbollah involve the official adoption of the white paper, "A Clean Break: New Strategies for Securing the Realm," as U.S. policy. The "Clean Break" document, authored in 1996 by Israeli Prime Minister Binyamin Netanyahu, Richard Perle, Douglas Feith, and other neocon operatives, was written at the same time the program for the invasion and occupation of Iraq was drawn up by the same neocon players.

Carrying out the next phase of the neo-con "Clean Break": Netanyahu, Perle, and Ledeen still call the shots on U.S. and Israeli policies. First it was Iraq, then Palestine and Lebanon, next is Syria and Iran. The current U.S.-Israeli strategy of bombing and invading Lebanon is a follow-up to four years of covert activities by the Pentagon, White House, and Mossad in Lebanon that involved the car bombing assassinations of top Lebanese officials in order to clear out Syrian forces from Lebanon. The assassinations of Elie Hobeika, George Hawi, and Rafik Hariri were all carried out to destabilize Lebanon and force the withdrawal of Syria from Lebanon. Syria was blamed by the Bush administration for all the car bombing assassinations in Lebanon.

Israel's border exercise that saw the capture by Hezbollah of two Israeli soldiers on the Lebanese side of the border and the contingency plans involving the kidnapping of an Israeli soldier by Hamas in Israel, near the Israeli-Gazan border, provided a pre-text for the Israeli attack on Gaza and Lebanon. Similar plans have been drawn up to respond to a Syrian "capture" of Israeli troops in Lebanon near the Syrian border or from the Golan Heights. That will be used to justify a joint Israeli and American attack on Syria, with Israel entering from Lebanon and the U.S. entering from Iraq.

The carrying out of the joint Israeli-U.S. attack plan for Lebanon, Syria (and eventually, Iran) is the reason why the United States has stymied UN attempts to seek an immediate cease-fire. The intent of the Bush administration is to see a widening of the conflict. Unconfirmed UN ambassador to the UN John Bolton, appearing on Fox News, laid out the future blueprint for the joint U.S.-Israeli regionalization of the war in the Middle East when he stated, "I think that if you look at the support that Iran and Syria have given groups like Hamas, Hezbollah, Palestinian Islamic Jihad that really the reckoning we need here is a reckoning, not just with the terrorist groups, but with the states that finance them."

WMR has also learned that top Israeli and U.S. military officers are adamantly opposed to the Clean Break policy. Many Israeli generals, remembering Israel's bloody occupation of Lebanon in the 1980s, favored negotiating a prisoner swap with Hezbollah. The Olmert government is purging the last remnants of the Yitzhak Rabin elements who favored negotiations from the Israeli military and intelligence agencies much in the same way that opponents of the Bush regime have been purged from the U.S. military, CIA, and State Department.

Wayne Madsen is an investigative journalist, nationally distributed columnist, and author who has covered Washington, DC, politics, national security, and intelligence issues since 1994. He has written for The Village Voice, The Progressive, CAQ, Counterpunch, and the Intelligence Newsletter (based in Paris). Madsen is the author of Genocide and Covert Operations in Africa 1993-1999, co-author of America's Nightmare: The Presidency of George Bush II, and the forthcoming Jaded Tasks: Big Oil, Black Ops & Brass Plates. Madsen is also the author of The Handbook of Personal Data Protection (London: Macmillan, 1992), an acclaimed reference book on international data protection law. Madsen is a former U.S. Naval officer who was assigned to the National Security Agency during the Reagan administration. He also has some twenty years experience in computer security and data privacy. He has also worked for the Naval Data Automation Command, Department of State, RCA Corporation, and Computer Sciences Corporation.
www.waynemadsenreport.com/


Thanks Zaki for the forward