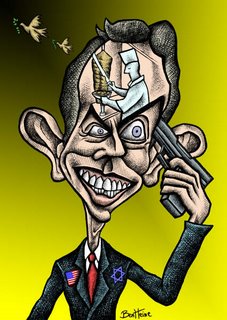 Cartoon by Ben Heine
Five years of intense war against terror and Britain is far from becoming Islamophobic to the degree that Blair and his Zionist friends would have expected it to. Five years of Anglo-American war against Islam, it is actually British Jews who insist that there has been an alarming increase in Anti-Jewish feelings. More than one year after 7/7 the British public keeps refusing to endorse Blair’s distinction between ‘reactionary Islam’ and a ‘good’ kind.

Though the British Government, the Home Office and the security forces do everything they can to split the British society by spreading fear, maintaining intense pressure on British Muslims through legislation, raids, and the creation of some phantasmic terror alerts, the British people remain totally apathetic to Blair’s call. If anything, the Brits are now convinced that there is something wrong with Blair and that he is actually the dangerous one. They want Blair out of the picture. Interestingly enough, it was Blair’s fateful support of Israel’s murderous attack against the Lebanese people that happened to be the last nail in the Prime Minister’s coffin.

One may ask why the Brits fail to follow their Ziophilic PM.

Kebab is my answer, as simple as that. In the wee small hours, all you can eat in Britain is Kebab: Chicken Shish, Lamb Shish, Lamb Doner, Chicken Doner and Shwarma. Seemingly, it is at the Kebab places as well as small corner shops where Brits encounter the Muslim community. In most places it is a young Mediterranean or Asian male with a foreign accent who is there to take care of one’s needs. Medium or Large? He will ask, salad? Garlic sauce, chili sauce?

It isn’t a secret anymore, merging into Britain is assimilating into its cuisine. Balti cuisine is now ‘Britain’s National Dish’. Kebab is on the verge of replacing the old Fish and Chips shops all over the country. Gefilte Fish, how to say it, is still foreign terminology in English. You may find it on Israeli imported tins at the Kosher section at Tesco and M&S or in NW London but nowhere else.

Kebab, on the other hand, is now scattered all over Britain. You will find it in every high street. If you happen to visit a Kebab shop located in an Arab-populated quarter such as Edgware Road, you may even be lucky enough to get invited for a Shisha session. And this is basically it. Once you have had your Kebab settling in your belly, your mind embraces the Orient. It has actually nothing to do with the taste or the nutritional value of Kebab. It is actually the outcome of a fundamental metaphysical principal: ‘human beings happen to trust people who put food on their table’. You don’t trust, you don’t eat. And this is something that even Tony Blair hasn’t managed to change.

Ok, you may think to yourself, this explains why the British failed to follow Blair’s Islamophobic agenda, yet, it doesn’t explain the alleged ‘rise of Anti-Semitism’ .

Although British Gentiles do not rush to Blooms en masse, one may have to admit that in the wee small hours, Golders Green, the official London shtetle, is indeed buzzing. It is open for visitors. More than a few Jewish bakeries and bagel machers are selling their goodies. Yet, it is mainly members of the Jewish community who you find there. Unlike Edgware Road that has already become London’s No 1 late night cultural melting pot where everybody is hanging out either in Ranush, Maroush or Al-Dar, Golders Green is a Kosher social setting. If you happen to stop at Karmeli for a Burekas or a rogalah, the only people you meet there are big men with skullcaps hanging around with their Kosherly dressed spouses. Goyim do not feel welcomed at Karmeli, Tabun, Blooms or in any of the other Kosher delis around.

One may ask oneself where the Brits meet their Jewish fellow countrymen. Like in the case of Muslims, they probably meet them in very many places. In the arts, in the music business, in academia, in the hospital, in the market, in the financial world. The Brits meet many Jews and Muslims without even being aware of it. Yet the more interesting question to be asked is where Britons meet the ‘stereotypical Jew’.

First they meet him in the press, mostly in the shape of Zionists who happen to be the loudest (obviously) supporters of Blair’s criminal wars. The Zionist, a politically orientated Jew, insists upon presenting a phoney argument for violence in the name of humanism and democracy. He would advocate killing in the name of world peace. In short, he is the Neocon Ambassador to the UK. Considering the emerging colossal defeat in the War Against Terror as well as that in Iraq, it is rather obvious that some Jews are now regretting the early war mongering by their ideologically motivated brothers. Yet, it is exactly this initial manifested support for the war that makes Jews feel so unsafe in Britain at the very moment.

But obviously it isn’t the press alone, in fact the Brits have a clear image of the ‘stereotypical Jew’. ‘The Jew’ is by now an image of a very gifted, shrewd and skilled man. ‘The Jew’ is the one you need when you consider buying a new home but lack the necessary funds to do so. ‘The Jew’ is the one you need to speak to when you seek a mortgage broker who knows how to ‘build a financial portfolio’ and ‘curve the sharp corners’. When the Briton needs to sort out his inland revenue bill, it is again ‘The Jew’ accountant that at least stereotypically, does it better than anyone else. When the Brit needs some legal aid it is again ‘the Jew’ who possesses the reputation for the most appropriate qualities.

At least stereotypically, ‘the Jew’ is there to do the things the Briton hesitates doing on his own. Surely this shouldn’t be a problem. 'The Jew’ has an established role in British society. He is there to trace the legal loopholes, to teach you how to save on your taxes, how to work less and earn more. He’s there to set up your ‘off-shore bank accounts’, to help you win a legal case even when you yourself aren’t so sure you deserve such a victory. Stereotypically at least, ‘the Jew’ is the ultimate in shrewdness and this is exactly where the Jewish modern tragedy starts. The better the job ‘the Jew’ is doing on your behalf, the less highly you think of him as a fellow human being. The more successful he is at winning your case, the less trustworthy he becomes. The better he serves you, the less you want him to be your friend.

Once the Britons had been pulled into the Zionist inflicted Judeo-Islamic conflict and were asked to take sides, it was the Kebab boy rather than the accountant who happened to win their hearts. Seemingly, it is the young struggling foreign man, who unpretentiously makes a living that finds his way, accepted into British society, while modern ‘Nathan The Wise’ is fading into an inevitable social detachment.

But ‘Kebab philosophy’ doesn’t stop there, it goes at least one step further: It is an established fact that Britons are basically a bunch of devoted holiday makers. What they really love is just to fly away. They love to be close to the sun and as far away as they can from ‘London’s congestion charge’. But in order to do so, they first have to visit the airport terminal. Once in the terminal already on their way to the Duty Free, the Brits are stripped of their drinks and they are asked to take off their shoes as well. It occurred to me a few days ago, that just their holding their shoes in their hands, stripped of alcohol, marching triumphantly and cheerfully in stocking feet, the Brits resemble Muslims entering a mosque in Kabul, Baghdad or anywhere else. No doubt, due to their PM’s recent wave of colonial Zio-centric zeal, the Britons are now adopting some deep and meaningful Muslim rituals. But how to say it, while Muslims take off their shoes out of respect to Allah, the Brits take theirs off out of respect to Bin Laden, Al Qaeda or any other CIA fictional terror network. What can I say? I better confess, Tony, if this is what you had in mind, you may have been on the right track all the way through. If this is indeed the case we may ask you to stay in office forever.