PRIVATE: a Must See Film 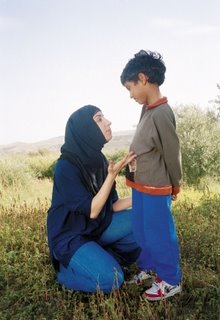 At least for those of us in the Northern Hemisphere, the cold, short days of winter are creeping up on us. That means catching up with films that we hadn't seen and books we hadn't read. In the next few days, I'll write about a book I really loved, but for now, I want to suggest that everyone see "Private" by Saverio Costanzo.

I finally saw it, after having read about it and written about the vicissitudes of the film itself: winner of international festivals and selected by the Italian jury as the film they wanted to represent Italy at last year's Oscars, but elmininated from the running because "not filmed in Italian". It stood up to all of my expectations and then some.

Brilliantly written and directed and having a cast of actors who were utterly convincing in their roles, where a drama that pulls the nerves to their limits leaves space for deep sensitivity to the psychological states of all the characters would demand extraordinary talent and naturalnes. Each character is developed in his or her contradictions and complexity, merit of an airtight screenplay and the conviction of those who participated that what they were doing was real. The actors were all Israelis and Palestinians, obviously, drawing from their own feelings and experiences to make the film look almost like a documentary, even though I believe it was inspired by Italian Neorealism.

The film tells the story of a Palestinian family whose home is occupied by the Israeli Army because it is considered to be a good outpost. The tension of the situation, and the human implications of the bigger picture are palpable. And, what is worse, this story is true, and it is a common occurence. Not a single one of us would tolerate such a situation for ten minutes, and therefore, we can't help but feel the injustice of it all.

For Israeli apologists, it would be a good film for them to see how the IDF works, what it actually does in a real life setting, and to consider if this is something that should be permitted and in any way justified. This is not an extreme case, unfortunately.