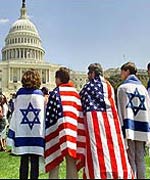 Saul Landau
Like other progressive Jewish friends, a retired psychology professor justified the invasion of Gaza and then Lebanon. “Israel fights terrorism to meet its legitimate security needs,” she stated -- a simple fact. This sadly included routine attacks against civilians in Lebanon and even depriving the Palestinians in Gaza of food and water. “They had to do it. How do you fight fanatics?” she said, sadly but firmly.

She used “fanatics” as code for members of Hamas and Hezbollah. Sheik Hassan Nasrallah, Hezbollah’s leader, “should be killed so that Israel could enjoy some peace. Look at how many good Jewish people have died,” she said, referring to Israeli civilians and soldiers -- some were Israeli Arabs -- who perished during the war against Lebanon.

In the 1960s and 70s, this woman marched for civil rights and protested against the Vietnam War. She still thinks of Cuba as a progressive place and opposed Bush’s Iraq War. But on Israel, she applies different criteria. “Why should Israelis suffer because of extremists, like Hezbollah and Hamas?”

And the suffering Israel imposed on Palestinians? I asked. Each month residents of Gaza die from Israeli violence at the rate Israelis die from opposing force every two decades.

“Too bad they have to suffer. They refused good chances repeatedly. Look how they rejected peace at Camp David, referring to the “generous” offer by Ehud Barak in July 2000.”

In several versions of events at that summit, presided over by Bill Clinton, all agree that Israeli and American negotiators offered Arafat a Palestinian state based on Israel turning over more than 90% of West Bank land to the Palestinians along with Gaza and a land passage between the two. Israel would have pulled out of 63 settlements. The agreement allegedly called for Arab East Jerusalem to become the new capital. Refugees would have the right of return to Palestine, and would receive reparations from a large international fund. Arafat would concede Israeli sovereignty over the religiously important parts of the Western Wall.

Arafat refused the offer, but had no counterproposal. Clinton pushed, indicating that Arafat’s silence indicated “you, the Palestinians, did not come to this summit with sincere intentions.” Rob Malley, Clinton’s adviser who attended the meeting, claimed “Barak was eager for a deal, wanted it achieved during Clinton’s term in office, and had surrounded himself with some of Israel's most peace-minded politicians.” Clinton blamed Arafat for the summit’s failure. A subsequent non-written Clinton plan, to which Barak agreed, fell apart just before Clinton left office in January 2001 when Arafat objected to Israeli control of parts of the Western Wall. Soon after, Sharon replaced Barak as Prime Minister. Arafat gave the nod to violence as a Palestinian strategy, thus freezing negotiations. Three days before Clinton left office, Arafat supposedly said “you are a great man.” “The hell I am,” Clinton said he responded. “I’m a colossal failure, and you made me one.” (Ma’ariv, April 6, 2001)

Arafat’s failures as a leader do not explain why Israelis think that violence will prevail after decades of failing to win peace and security through that tactic. Why would Palestinians in Hamas and Lebanese in Hezbollah change their minds because Israel bombs them? After all, from 1948 on Israelis drove Palestinians from their homes and destroyed their villages. Now, their angry kids and grandkids, whose numbers have multiplied, confront Israel.

“Israel,” my professor friend averred, “is a democracy. That separates it from those other regimes.” She, like Progressive Zionists in Israel and the United States, believe that Israel must survive both as a “Jewish state” and as a democracy.

Zionism as an ideology brought Jews back into the mainstream of world history. Ironically, many of the leaders of the movement to create a Jewish state were also atheists, who did not think initially that orthodox Jews, whom they sneered at socially, would play a heavy role in determining the contours of the Jewish state. Some Israeli founders, socialists and humanists believed that Jews and Palestinians could live together in a Jewish state. But if the one person one vote rule applies, the future of a Jewish state will face the fact that Arabs outnumber Jews.

Israel has responded to the growing Arab birth rate by luring Jews -- including lots of Russians, whose “Jewishness” appeared somewhat dubious. They tried to “settle” them in the occupied territories. Some Orthodox rabbis even sanctioned the recruitment and conversion of descendents of Peruvian Incas who were transported to the West Bank and recruited into the IDF. Some of this “settling” followed the Oslo Accords of the mid 1990s, which at least in spirit vitiated against such encroachments on Palestinian land.

This expansion process led to an increased role for the military -- to protect the new enclaves. More Palestinians had to move, and more holes grew in the shrinking and non-contiguous Palestinian territory. Militant and ultra right sects, frustrated over Israel’s inability to force the remaining Palestinians out, became violent.

In 2004, a group of the late Rabbi Meyer Kahane’s followers, linked to the Jewish Defense League in the United States, assaulted Arabs trying to harvest their olive crops. When John Ross and others volunteered as peaceful witnesses to try to deter the attacks, a gang of thugs wearing skull caps descended on him and beat him so badly he had to go to the hospital for a week. Ross protested at them “beating an old Jewish man.” They called him “traitor” as they brought their baseball bats down on his body.

In 1984, the “scholarly” equivalent of such thuggery emerged in Joan Peters’ From Time Immemorial: The Origins of the Arab-Jewish Conflict over Palestine. Palestinians never existed, she asserted. Those who call themselves by that name are recent immigrants, she argued. The book became a big seller and received rave reviews from the New York Times and Washington Post and from noted authors like Saul Bellow, Barbara Tuchman and Elie Wiesel.

Noam Chomsky concluded that the Peters book justified Israel eliminating Palestinians from the area because it would raise “no moral issue, because they're just recent immigrants who came in because the Jews had built up the country.” (Understanding Power, 2002)

Norman Finkelstein, then a graduate student at Princeton, read the book, checked Peters’ sources and then accused her of perpetrating a fraud. In Image and Reality of the Israel-Palestine Conflict (1995), Finkelstein used Peters’ own sources to show how she had fabricated and distorted the evidence.

In England, Paul Blair (April 20, 2002) also refuted the Peters thesis, “that the land was empty when the Jews arrived and that the Palestinians are recent arrivals.”

Blair called From Time Immemorial a “work of propaganda, with all the bad connotations that term carries ... distortion and fabrication... She cribs uncritically from partisan works. She conceals crucial calculations, and draws hard conclusions from tenuous evidence. She speculates wildly and without ground. She exaggerates figures and selects numbers to suit her thesis. She adduces evidence that in no way supports her claims, sometimes even omitting "inconvenient" portions of the citation... She "forgets" undesirable numbers in her calculations. She ignores sources that cast doubt on her conclusions, even when she herself uses those sources for other purposes.”

Most scholars now accept the fallacies of Peters’ thesis of non-existent Palestinians. But the fear many liberal American Jews share for Israel’s future is expressed by condoning behavior they have rejected from their own country. My professor friend, for example, felt that Israel was justified in kidnapping elected Hamas Deputy Prime Minister Nasser Al Shaer from his West Bank home on August 19. “How else do you fight terrorists?” she replied.

Israeli heroes like Itzhak Shamir and Menachem Began once earned the terrorist label. In 1946, they helped blow up the King David Hotel and dispatched scores of civilians. They sent letter bombs to British officials. The label also applied to one of her heroes, Nelson Mandela. I watched her squirm as I reminded her that in 1976 three Israeli heads of state Moshe Dayan, Menachem Begin and Yitzhak Rabin hosted apartheid South Africa's Prime Minister John Vorster during his visit to Jerusalem.

“I guess,” she said, “that survival can force people to associate with the Devil.”

On August 19, Israeli survival called for a raid on Lebanon, violating the UN backed truce that ended the five week war. “The secretary-general,” the newspaper story said, “is deeply concerned about a violation by the Israeli side of the cessation of hostilities as laid out in Security Council resolution 1701.” On August 21, Israelis again crossed the border to kill supposed Hezbollah “terrorists.” One Israeli solder died. On August 23 Amnesty International accused Israel of committing war crimes against civilians.

When Jews die in conflicts tinged with anti-Semitism, I share my fellow progressives’ concern. But the number of Lebanese and Palestinian civilian dead and wounded far surpasses that of Israel. Do progressives actually believe that continued bombings will turn Palestinians and Lebanese into obedient neighbors, free of anger and hatred toward those who took their land?