Susanne Scheidt - Gaps in Italian Information on the Situation in Lebanon 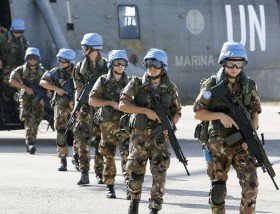 The Italians know practically nothing regarding the “mission” in Lebanon that places them directly in the front lines and which can even more precariously than in the past be presented as a mission “of peace”… This is the responsibility of an apparatus, the mass media, that uses programmed disinformation where authentic vacuities are presented.

I always watch the news on Italy’s RAI and RAI News24 to know how things are presented to the general public – bearing in mind that the greater part of the public does not read newspapers, nor do they watch foreign TV, getting their information, as a matter of fact, only by means of local television.

Yesterday and the day before the news of the RAI was loaded with the exploits of the Italian troops, who had been lovingly filmed during the deployment on the beach of Tyre. These images, interspersed by the comments of Alessandro Politi, Director of the Nomisma Observatory (Nomisma) and by Gianni Rufini, university professor, and by some updates that were sent by the RAI reporters from Lebanon who were following the disembarkation, were the only information available on Lebanon and on the relationships between Italy and Lebanon. The images that were transmitted to the Italian public were of “commitment to peace in the world and glory for Italy”, an Italy that one is lead to believe, is going to gain enormously in prestige thanks to its military contingent that is operating in Lebanon, to which very soon will see the association of “civil society” in the form of numerous Italian non-governing organisations.

But the RAI did not breathe a single word, on the other hand, on the sit-in that on 2 September 100 Lebanese Parliament members out of 128 were making at the Beirut Parliament in protest against the enduring Israeli blockade on the waterways and airspace of Lebanon, defined as a continuation of the war and a violation of Resolution 1701 itself, under which the Italian troops are already being deployed in Lebanon. Certainly, to speak of the protest demonstration of the Lebanese Parliament members would have raised even among the most ingenuous television viewers the question as to whether with the Israeli blockade still persisting, our troops were not perhaps entering into a situation that is still characterised by military occupation…

Just as the protest demonstration of the Lebanese Parliament members was not mentioned, there was made no mention of the decisions of the German and Turkish governments to suspend the deployment of their troops for the new UNIFIL mission until the so-called “rules of engagement” were clarified – that will determine the actual operations of the armed forces. The Italian government, it must be recognised, has not been concerned with these “rules of engagement”, because the parties that occupy the Parliament and the Senate have not even raised questions about it. The German and Turkish governments, on the other hand – and we are still talking about governments that are part of the NATO, not those of Hugo Chavez or Fidel Castro – don’t dare send a single soldier until these rules are known. Before that point, the Parliaments are not called to vote upon the relative resolutions.

There remains a question: has the Italian government received an official and formal request by the Lebanese before they sent an Italian military contingent? Or has the request come only from Kofi Annan and Alain Pellegrini? The RAI news programs have not transmitted any information about these very important circumstances.

Nor have they spoken of the situation in Turkey, where the promises of the government at the NATO headquarters to honour it Atlantic loyalties with the sending of troops and ships from their Navy to Lebanon has caused difficulties in its relations with the opposition, but has even been problematic for the relationship between the Prime Minister Tayyip Erdogan and President Ahmet Necdet Sezer. What had begun as a protest, headed by Sezer, against the “protection of interests of other nations” at a cost to one’s own interests (in this case, to avoid seeing the birth of a Kurdistan from the body of Iraq that would be wedged within Turkey), has in the meantime started a detailed debate that is anything but pleasing for the USA: the block that opposes the sending of troops in Lebanon is giving voice to the insistent preoccupations that the imminent interference in the internal affairs of Lebanon, side by side with the presence of military troops lead by the NATO (the UN label seems to fool only the Italian public), could cause Lebanon to fall headfirst into the chaos and violence created by a situation similar to the one Iraq is sunk in, involving not only Turkey, but the entire Middle East.

The fateful reunion of the Turkish Parliament has been called for Tuesday. To increase its chances at success and making its resolution pass, the Prime Minister Tayyip Erdogan has had to promise that in the eventuality that the UNIFIL troops in Lebanon would be given the task by the UN Security Council to disarm Hezbollah, the Turkish contingent would be immediately withdrawn.

The worries that Erdogan had hastened to minimise seem to have strong foundations if one takes into account that at the same time, even the German government had to postpone its parliamentary discussion, after the words of the Defence Minister Jung had kicked up a row in the Parliamentary Commission for Defence matters: Jung, referring to the new UNIFIL force that had to be built according to the UN Resolution 1701 http://www.un.org/News/Press/docs/2006/sc8808.doc.htm), had uttered that the new, still as yet unknown “rules of engagement” would have foreseen the deployment of “combat troops”. Yet, the text of the resolution that has been submitted to voting in Parliament speaks of a “peacekeeping mission”. These are the same worries that the Turkish public opinion is facing.

But, the RAI does not interview Turkish or German exponents of the respective views, for or against the deployment, nor has a single Lebanese Parliament member that is participating in the ongoing sit-in been interviewed. In other words: the Italian mass media make use of large gaps in order to utilise disinformation.

Translated from Italian by Mary Rizzo, member of Tlaxcala (www.tlaxcala.es), network of translators for linguistic diversity. This translation is on Copyleft.