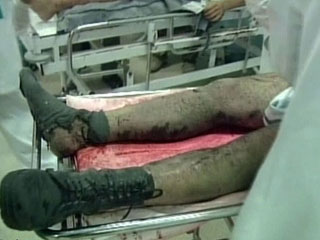 The investigative report ensued from the alarm that was launched in the second part of last July by some doctors of Gaza’s hospitals who had treated for the first time some inexplicable wounds that had provoked the amputation of legs in at least 62 cases. On many occasions, the doctors asked for the international community’s help in order to understand the cause of these strange wounds, which presented fragments that were little and often invisible to X-rays and unaccountable cuts that were provoked by heat within the lower limbs.

Several articles appeared in the national and international press.

After lengthy research, RaiNews24’s investigative branch has detected the plausible cause of these effects: it seems that they are related to a new weapon that is dropped by drones (unmanned fighter planes) and then precisely remote-controlled to strike against the established target.

The weapon, according to the military magazine "Defence Tech", is called DIME, that is "Dense Inert Metal Explosive". It is a carbon-encased missile that, at the moment of explosion, shatters in minuscule splinters and, at the same time, sets off an explosive that shoots blade of energy-charged, tungsten powder, thus burning and destroying through a very precise angulation all that it encounters within a four meter range.

This technology is comprised in the new class of "low-lethality" weapons that minimise the collateral damage and reduce the lethal effects to a restricted space.

In these pictures—taken last July and August at Gaza hospital—the bodies of persons who are likely to have been struck with DIME (Dense Inert Metal Explosive) bombs are shown. As the images seem to prove, the explosion of these bombs is thought to cause a shock wave with an angulation such that it hits the victims at their lower limbs and in the genital area.
According to doctor Joma Al-Saqaa from Al-Shifa Hospital, in Gaza, in the images one should be able to see the metallic powder that would make the wounds photographed consistent with the supposed effects of tungsten DIME bombs.

Translated from Italian by Diego Traversa and revised by Mary Rizzo, members of Tlaxcala (www.tlaxcala.es) the network of translators for linguistic diversity. The video is Copyright RAI Corporation (Italy).

GAZA, After the RAI NEWS 24 Investigation, new elements on the "New" Weapons

"The data that is certain is that between the months of June and August, Israeli Aviation has used different or new weapons in the Gaza Strip, which have provoked wounds that have never before been seen. We have documented dozens of cases of injured persons who have lost one or two inferior limbs for reasons that are inexplicable," thus says to MISNA, Doctor Massinen Mouawia, the General Director of Emergency Room services in the Gaza Strip in care of the Health Ministry of the Palestinian Authority.

It has been several hours now that the new investigative report by RAI NEWS 24 has been circulating. (RAI NEWS 24 is the satellite channel of Italian State Television). According to this report, in the past months, it is claimed that the Israeli forces have utilised a new type of weapon with shrapnel of carbonium and tungsten powder. "In the main hospitals of Gaza, such as the Shifa Hospital, our medical colleagues have treated wounds that present small holes, especially at the legs; in some other cases, within the body itself metallic fragments of various dimensions have been found, which are actually larger than the small wounds," Doctor Mouawia explains. He is a cardio-vascular surgeon. "Personally I have collected in a CD the documentation relative to 86 cases that I am ready to show in Italy or anywhere else so that people can know what has happened here in the past months, when the public opinion was directed especially at the war in Lebanon."

"In our opinion, Israel has also used chemical weapons, such as numerous cases demonstrate, documented cases, with persons having extremely serious burns to their internal organs in the absence of external wounds," Doctor Mouawia explains further to MISNA, in a telephone call between Italy and Gaza City. According to the report of RAI NEWS 24, the "new" weapon used in Gaza seems to be very similar to the explosive DIME (Dense Inert Metal Explosive), created by the United States weapons industry and defined on the Internet site from a United States Aeronautics laboratory as a weapon with "focused lethality" ("targeted mortality"), in other words, capable of destroying its target causing minimal damage to the surrounding area. According to the evidence gathered in the report, those wounded from this weapon have had damage leading to the amputation of the inferior limbs that were all at precisely the same position (just below the genitals) and with identical modalities. "In the Gazan hospitals," Doctor Mouawia adds, "the doctors are facing a situation that is truly difficult, worsened by the state of seige that we in the Gaza Strip are forced to live under. It is like an open-air prison: many of those wounded have died due to the seriousness of the wounds provoked by these weapons that are "different" from the traditional ones up to this moment used by the Israeli Aviation." Speaking to MISNA, he added that no new cases had been recorded following the month of August. According to the Director, since the capture of the Israeli soldier last 25 June by Palestinian extremists, until now in the Gaza Strip 286 Palestinians have been killed and more than 4,200 have been wounded. [EB]

(translated from Italian by Mary Rizzo, member of Tlaxcala www.tlaxcala.es, the network of translators for linguistic diversity. This translation is on copyleft. It may be reprinted citing the source and altering nothing.)