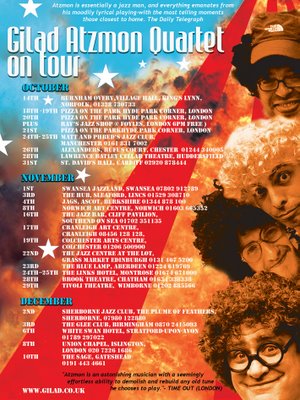 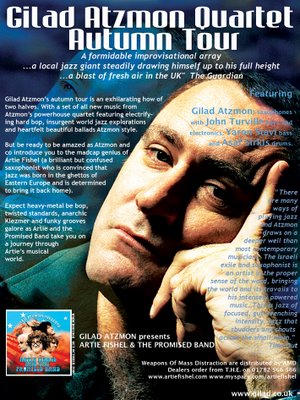 Yeah, sooner or later, it had to happen. Gilad Atzmon would make an album of Jewish music. What is that supposed to mean? I knew you'd ask that. Well, according to Artie Fishel, the Zionist Alter-ego of Gilad Atzmon, it means that this is Jazz music taken back to its origins, in the Ghettos of Siberia, in the Jewish Diaspora. What does it sound like? Well, I'd hate to argue with Artie, but I think he limits his description a bit too much. What it actually is is a panorama of modern music from Classical (Dvorak), to Broadway (Rogers and Hammerstein), to Swing (Ellington), to Klezmer, to Drums and Bass, to cool Jazz (Hancock). There is quite a mix there, and even more interesting, it flows and meshes in a way that defies many of the rules of genre: at times it is comical, at others is jarring and electric. It never smashes one over the head with a "message", but it works as a surprise musical box, always entertaining, and sometimes truly breathtaking.

Anyone who has seen Atzmon play can easily state that he shifts in and out of themes and rhythm like a lysergic dream, roaming the wilderness of an enormous songbook where anything is there for the taking. Whatever thread his mind is following is anyone's guess, as in the same piece one is taken along on a jet stream, where the energy and creativity are pushing him to dig for even stranger and more appealing juxtapositions than we've been accustomed to hearing ordinarily. This is precisely what happens in the latest album under the guise of Artie Fishel and the Promised Band. The universe of melody and rhythm meets spoken word, there are moments of "novelty record" comicity, but they are soon standing face to face with the most raving and riotous improvisations, where serious talent and research for the "new" take the driver's seat. In essence, it is quite an exhilarating trip.

And, this time, it seems Atzmon moves further into delving at the core of his own essence, as a person who grew up surrounded by the Foundational Myth of Israel, which is the meaning of Zionism: that Israel belongs to the Jews and that others are usurpers. He has chosen to create a figure that represents a paradigm of Zionism, and a situation that hints at how this philosophy is not grounded in reality, but in wishful thinking. Without blatantly stating it (Artie is an Israeli Fighter Pilot, He Loves his People and his People Love him), Artie adamantly insists upon claiming ownership of something as exclusively his, that the form of music that can generally be called Jazz belongs to his people and that he is bringing it back home. Making the analogy between a form of art and a piece of land, there is something more than slightly absurd in claiming exclusive ownership of something that objectively has a very different history.

Yet, those who aren't open to this message, and they are many, may still be able to appreciate the deep understanding that Atzmon and his band seem to have for the complexity of the musical melting pot. This is outstanding playing, brave and exciting and extremely fun.

For a limited time, the album is available (through his site, see the LINK at the sidebar) with an additional CD, including an interview with BBC Radio 7, Artie Fishel meets George W. Bush, a reminiscence by Lt. Col Israel Israeli and some tracks that can't be found on the album. Also, play the Artie Fishel Game at the site, and check out the live dates.