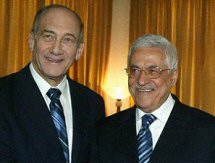 Though there has been a week long hiatus in armed clashes, Palestinians fear the heavily armed security forces of Hamas, which runs the Palestinian government, and Fatah could erupt in violence at any time.

Israel has been trying to reinforce Abbas' standing among his people. Israeli Prime Minister Ehud Olmert said Abbas is a partner for negotiations - unlike Hamas, which rejects the existence of Israel and refuses to renounce violence.

Amos Gilad, a senior Israeli Defense Ministry official, told Israel Radio the military assistance was rendered to reinforce the "forces of peace'' against the "forces of darkness'' threatening the region, a reference to Islamic extremists.Nabil Abu Rdeneh, a spokesman for Abbas, issued a statement denying any arms deal. However, at midday Thursday, witnesses saw a truck belonging to the pro-Fatah National Security force carrying what appeared to be sealed boxes of weapons.

When the truck attempted to make a quick detour, one box fell onto the ground, scattering a pile of automatic guns on the road, the witnesses said. Security men in the truck quickly got out and collected the weapons.Israel approved the transfer of 2,000 automatic rifles, 20,000 ammunition clips and 2 million bullets on Wednesday, Israeli officials said, speaking on condition of anonymity because the shipment had not been officially confirmed by Israel, the Palestinians or Egypt.

Ahmed Youssef, a political adviser to Prime Minister Ismail Haniyeh of Hamas, said Egyptian officials had assured him no arms were sent. He accused Israel of spreading false rumors about an arms shipment in "an attempt to increase tensions among the Palestinians.''

Seventeen people have died in this month's Hamas-Fatah fighting, which included an assassination attempt on Haniyeh.

On Thursday, the prime minister left Gaza to resume a trip to Gulf states that had been cut short by the violence, which has since subsided. He was headed first to Saudi Arabia, then to Kuwait, Qatar and Jordan, where he and Abbas have been invited by King Abdullah II for talks.

Some 5,000 Hamas militiamen, some on foot, others in jeeps, lined the roads as Haniyeh traveled from his base in Gaza City to the Rafah crossing between Gaza and Egypt. Haniyeh's convoy came under fire at Rafah on Dec. 14 when he came back from his suspended trip, and the heavy security was a clear indication that concerns about his safety remained high.

Meanwhile, one of the Palestinian militant groups holding a captured Israeli soldier said progress has been made toward a prisoner exchange.

Abu Mujahed, a spokesman for the Popular Resistance Committees, said Egyptian mediators are trying to finalize a deal. "We received positive signals from our Egyptian brothers, who are acting on this matter,'' he said. "Everything depends on the Israelis.''

He declined to say when a prisoner swap might take place. The soldier was captured by Hamas-linked militants in June. Israel has agreed in principle to free Palestinian prisoners, but there are disagreements over numbers and timing.

Also Thursday, Olmert slightly softened his tone concerning peace overtures from Syria, saying he is open to "any murmur of peace'' from Israel's enemies.

Olmert added: "If our enemies genuinely want peace, they will find in us a fair partner, determined to establish relations of peace, friendship and reciprocity.''

Olmert's spokeswoman, Miri Eisin, played down the comments. "He has constantly said that if we see anything different, a glimpse of change, then that would be interesting and could make a difference,'' she said, but Syria continues to shelter Palestinian extremist groups.

In Jerusalem, Sen. Arlen Specter, who came to Israel after talks in Syria with President Bashar Assad, said the Syrian leader asked him to deliver a message: "Syria is very interested in peace negotiations with Israel.'' But when pressed about whether there were preconditions, Specter told Channel 10 TV, "it got to be a little fuzzy.'' He said Israel would have to judge whether the offer was serious.

In an interview published Thursday in the Haaretz daily, Foreign Minister Tzipi Livni said Syria wanted peace talks as a way of ending its international isolation. "We want peace. They want negotiations,'' she said. "Syria knows exactly what it has to do to become part of the international community, but it is doing exactly the opposite.''