If Israel has Nuclear Weapons, then why is Vanunu still under "Administrative Detention"?? 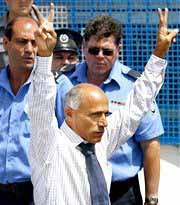 Download and watch the Vanunu Interview by the magnificent Eileen Flemming of We Are Wide Awake. It is an intense conversation, where he talks about Israel's nuclear program, his own arrest and cruel punishment (including 18 years of solitary confinement), two of which he was subject to constant sleep deprivation, psychological torture and other inhumane treatment. He speaks of what Christians should be doing about Palestine and Israel, the Apartheid Wall and the harsh conditions of that the Palestinian people are subject to each and every day. He also speaks of his own situation, where he is STILL, after having served 18 years of prison, the full term that was given to him, kept in a "special" kind of restriction of freedom, an imprisonment known as Administrative Detention, an entirely arbitrary punishment that Israel is making him endure, so that he is not permitted to communicate with foreigners or to move freely.

A few days ago, Vanunu wrote on his website:
'Soon Israel will declare its NWs'

Hi all.
Well it seems like new policy is coming from US.
Gates was going toward this policy since 1991, after Iraq war.
But he was removed by Clinton, and they gave 8 years to prepare the 9.11.attack, hoping to try to bring US here to stop Iran.
But no one can stop Iran, or more correctly no one can stop Israel.
So if this policy will continue, soon Israel will declare its NWs.

But that will be new future for the Middle East and all the world.

Me, I can go, end the spy game with my case.

So, new direction from US, ending the game that only Israel can have NWs. Now all the world are equals. The world will choose between future NWs wars, or a free world from all NWs, include Israel, and the US, and the father of all NWs policy, England.

The world is going to move forward. Soon.

Now that Olmert has declared what was taboo; that Israel has Nuclear Weapons, what possible reason does Israel have to punish Vanunu. It should now be as clear as water, He told the truth and Israel does not want the truth to be known, and if one does tell the truth, one deserves to be punished! It is time Mordachai Vanunu was rehabilitated by Israel. It is time that he is allowed to be a free man.